Retro has been a little less fashionable in the industry for the past few years. Not that it’s disappeared entirely, of course - the trio of American muscle cars are making the most of their ties to the past, and there are a few recent examples like the Fiat 124 Spider or even a certain Jaguar F-Type, clearly inspired by the timeless E-Type. But with the shift to electric power, the overall trend is that the industry has started looking to the future again.

And yet, a quick look at the rugged 4x4 category confirms there’s still interest in the designs of yesteryear. The Jeep Wrangler has been sticking to the design of the little 4x4 sent to the front lines during World War II for more than 60 years, and the new Ford Bronco is doing exactly the same thing with its new model, based on the Bronco of the 1960s.

And then there's the Land Rover Defender which, unlike the Wrangler and Bronco, remains a curiosity in North America. A few models of the previous generations did make their way here over the years, but the symbol of British ruggedness has never been much of a presence on this side of the Atlantic.

For the past few months, though, Land Rover has been offering its most iconic model to Canadian motorists prepared to drive a rugged 4x4 on a daily basis... and who have at least $62,800 in their bank account to play with. Which, by the way, is the base price of the Defender 90 without any options added.

The shorter Defender 90 remains, despite the brand's strategists’ best efforts, a niche vehicle with its two doors and a rear door that opens from left to right. Let's just say that the Defender 110 with its four doors and seven seats is a more practical vehicle for carrying passengers.

The Defender 90's particularities
Based on the reactions of pedestrians and motorists I encountered on the road during my test drive, the design of the new Defender 90 is a winner.

The model’s designers took several elements from the classic model, starting with the square silhouette. Most notable are the flat hood with contrasting metallic plates, grilles on the front fenders, horizontal windows from one end to the other and, above all, the vertical rear section with small LED position lights and the narrow door where the spare tire is attached.

And then, at the rear, those tiny side roof windows are a great nod to the model's past.

And the interior?
If you know Land Rovers well, throw what you know out the window. Inside, the Defender 90 has nothing to do with the brand's other models. Of course, there are a few components borrowed from other vehicles in the group, but the environment is uniquely Defender.

The dashboard, for example, features the latest information screens (one behind the steering wheel and another, touch-sensitive one right in the middle), but they're integrated differently, especially the centre one, which the designers even found a way to make “float”.  Moreover, a good portion of this dashboard can be used as storage space for a smart device or even a small bag.

The centre console is equally practical with its induction charging pad, refrigerated cooler and two cup holders. There's even extra space underneath. Note that it’s possible to order a full bench seat for the first row via the options booklet, which turns the Defender 90 into a six-seater. 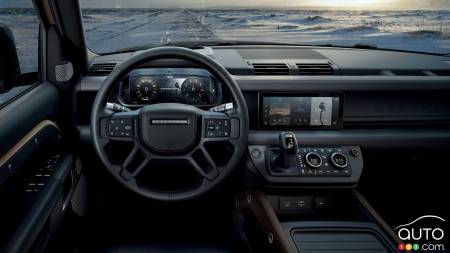 At the end of this console, you'll find all the most commonly used controls, including those for the climate system, transmission gear shifter, drive modes, air suspension and the obligatory knob for the audio system, which, curiously, is placed right next to the passenger.

In fact, the arrangement of the buttons in this area is confusing. There are still two knobs for the climate control, but it takes some getting used to, and I find it rather unusual that the button for the drive modes is on top of the one for the ventilation intensity. And I must say that the position of the gearshift lever hinders the manipulation of the central screen. It's beautiful and well designed, but very poorly thought out!

I should mention the space in the back, which is impressive for a 4x4 the primary mission of which is to venture away from the pavement. Only problem is that access is more difficult. You have to slide one of the two seats forward to get into the back... and the step is high!

Finally, there's the trunk, which doesn't give offer all that much space and flexibility when packing in luggage, for example. Definitely, when it comes to utility, the Defender 110 is better.

All the hardware of a rugged 4x4
I won't surprise anyone by saying that the Land Rover Defender is above all vehicle for projecting a certain image. Like a Mercedes-Benz G-Class, the British division's latest 4x4 is more likely to be found on city boulevards than on the rugged trails of the world, even though it has everything you need to venture into the most remote areas. But does can mean should? Would you dare to go off-roading in your new Land Rover that you bought for close to $90,000? That's what I thought.

But because I didn’t pay that, the Defender 90 did get a little dirty during my few days of testing it. Rest assured, I didn't take it on the famous Rubicon Trail or even the Land Rover experience in the vicinity of Montebello in Quebec, but the little trail along the highway that I did steer it on to was muddy enough to confirm the qualities of what is an authentic 4x4.

In Mud Ruts mode, set using the Terrain Response system, the Defender 90 made short work of water holes and tall grass was simply no match for the Land Rover. In fact, with the air suspension, it's very easy to surmount obstacles, especially since the off-road tires provide additional traction when you get off the road.

With two differentials, a two-speed transfer case and a permanent 4x4 system, the Defender 90 is not afraid of slippery or rocky terrain.

The verdict... behind the wheel
As I mentioned earlier, the Defender 90 is likely to be seen more often in urban and suburban milieus than out in the back country, and in this respect, the 4x4 stands out... in every way. For example, I was amazed to see how rough the suspension could be at times and I was not impressed with the fuel consumption average of around 14L/100 km. A drive between Montreal and Kingston, Ontario, however, allowed me put up an average just under 12L/100 km at 120 km/h... with - and this is just between us - a few peaks at 130!

The Defender is a very vertical 4x4, which makes it sensitive to side winds. And its higher centre of gravity means that there is some roll when you push hard in corners. But overall, the Defender 90 is a very livable SUV, thanks in part to that turbocharged 3.0L inline-6 engine, which is accompanied by a 48-volt mild hybrid system. The 8-speed automatic transmission is of course standard. This powertrain is without a doubt the most appropriate for this vehicle. With 395 hp and 406 lb-ft of torque at your disposal, your right foot doesn't need to work too hard.

The last word
This first contact aboard the 90, rarest of the two Defenders, was on the whole very positive. Aside from the somewhat high fuel consumption and the cost of the vehicle, the Defender 90 has as much charisma as the Range Rover and just as able to turn heads in the city and then grind it out in the country. Land Rover's new 4x4 has everything it takes to impress. 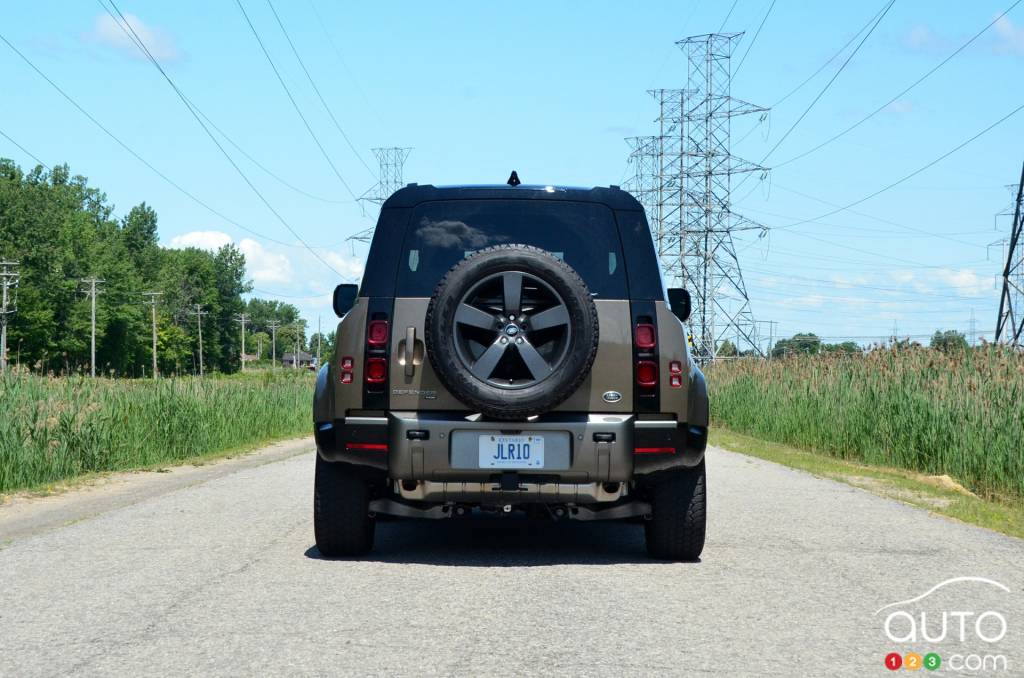 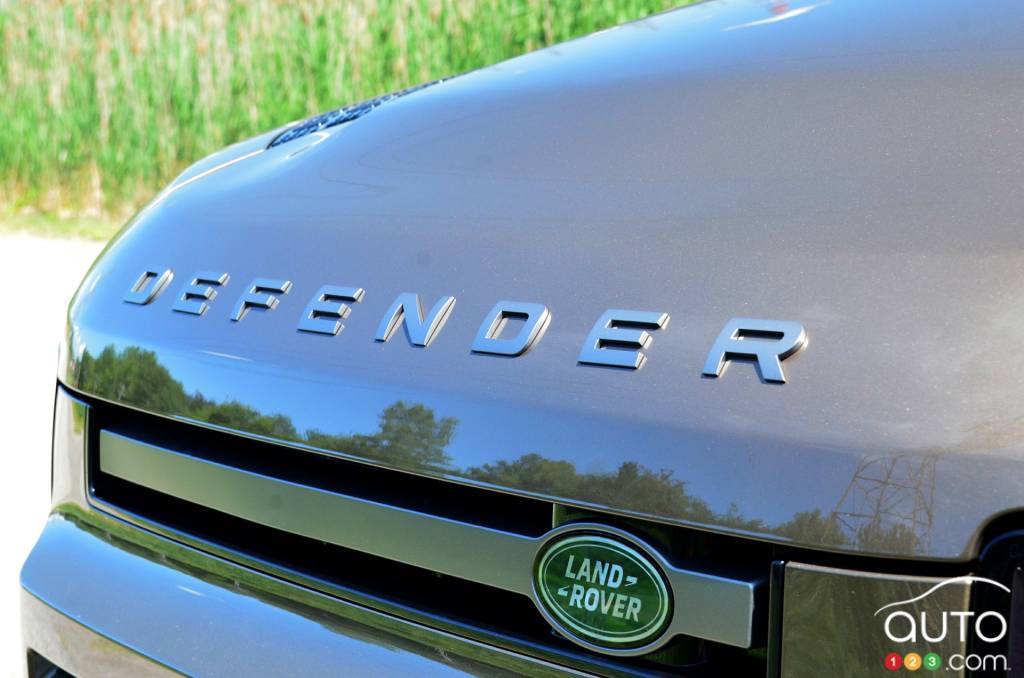 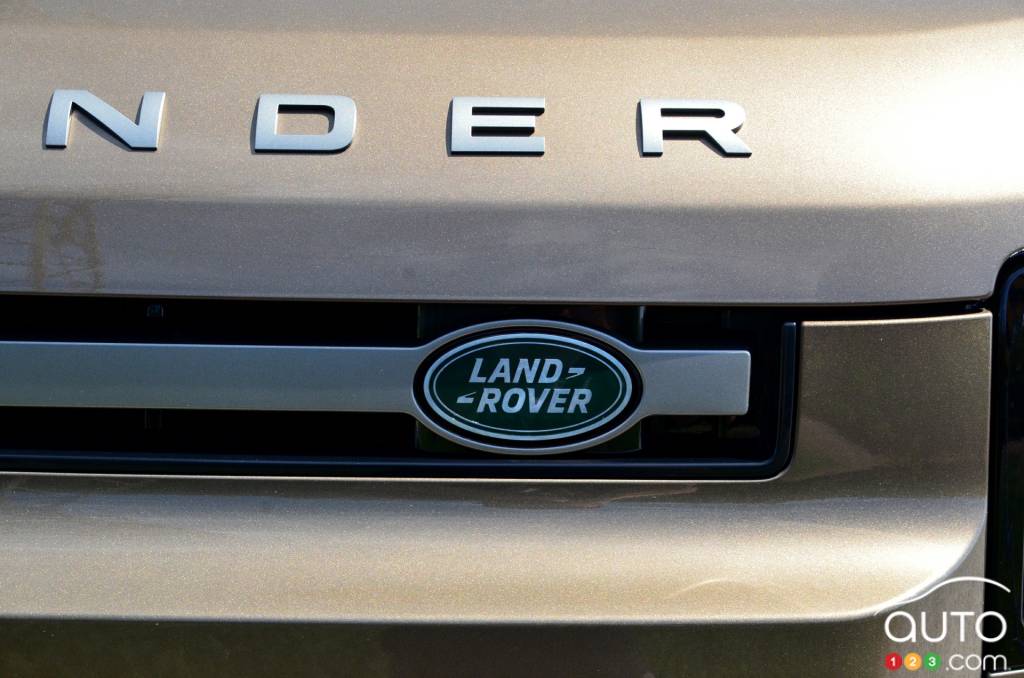 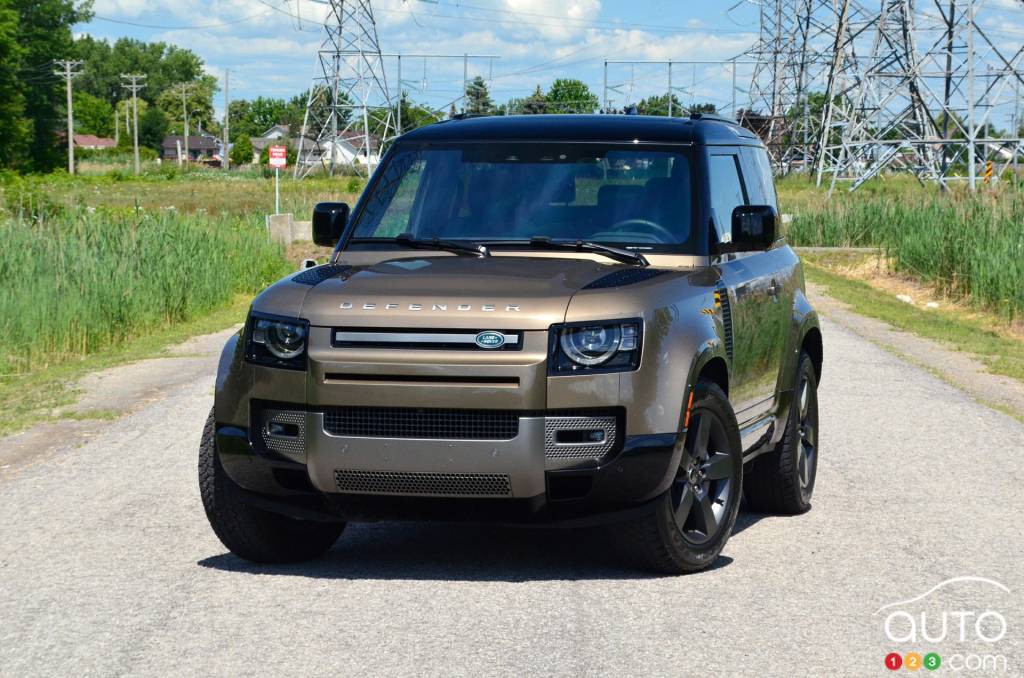 Land Rover has been forced to postpone the launch of its new Defender 90 for several months. The model becomes another victim of the coronavirus as the autom...