When I first drove the Mercedes-Benz GLB in GLB 250 form, I was impressed with Mercedes’ latest entry into the small crossover market.

I liked its boxy styling that reminds of a Scion xB -- actually a good thing even if you’re talking about a Mercedes – and its surprisingly roomy interior, not to mention the pure hilarity that there was actually a three-row option. A three-row luxury subcompact crossover? Who’s to say the Germans don’t have a sense of humour?

The one thing I felt was lacking was a little more variety when it came to trim choice. All we had to choose from in Canada was the GLB 250, this while the GLB’s GLC sibling was available as a GLC 300, 43 or 63 S and as either a four-door-coupe or wagon. I had a lot of fun in the GLB 250, but what if it had just a little more power? Now that would be something…

Well, ask and you shall receive. It wasn’t long after I drove the GLB late last year that the automaker came out with the GLB 35 AMG. It has more power, some very cool styling touches and some chassis tuning as well. Could this be the perfect formula? 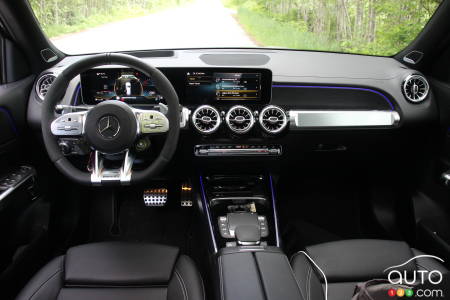 Inside
Well, sitting in the GLB 35 you get the same sensation you did in the 250. Meaning that even though the seats are a bit more aggressive in design, you still get plenty of headroom and a great view out forwards, rearwards and over the shoulders – big side windows will do that. But now there’s this great, chunky leather-trimmed steering wheel in your hands, complete with two AMG-specific drive mode and chassis/powertrain adjustment control pads attached to it at the 4- and 7 o’clock positions.

Of course, you also get that great fully digitized dash that makes use of crisp flatscreen displays for your infotainment and gauge cluster, as well as a main trackpad and little thumb pads on the left and right wheel spokes (optional) to control it all. I made little use of the latter when I sampled them for the first time in a Mercedes, but now that I’ve spent time with them in a handful of models, I use them almost exclusively.

The left-hand pad helps you navigate the gauge cluster (which can be changed to three different styles) and heads-up display, while the right-hand pad moves you through the menus on the infotainment display. Which, as it happens, gets its own set of “themes” that function mostly independent of the gauge cluster and will actually change the ambient lighting, automatically turn on your tunes (that happens in the “Lounge” setting) or automatically display your AMG performance data.

This is one heck of a slick interior that does well to deliver on the luxury promised by the badge on the snout. 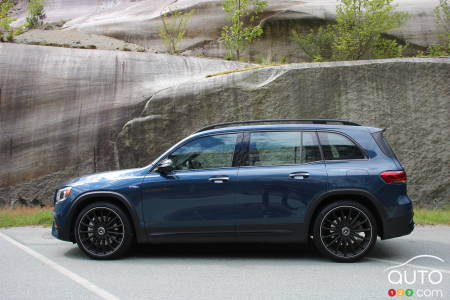 Outside
Speaking of the GLB’s snout: if that big logo and grille – as well as the headlamps either side of it – reminds you of something, it’s probably the larger GLS. Which makes sense when you consider the rest of the GLB’s detailing and shape, as it all reflects its larger sibling. The GLB is to the GLS as the GLC is to the GLE.

And you know what? I love it. It has that great profile, a cool stance and the fancy wheels, big front splitter, “Denim” blue paintwork, rear diffuser and dual potato cannon-style exhaust and it all comes together to form what is one of the coolest-looking Mercedes products we’ve recently seen, this side of the sports cars and roadsters. 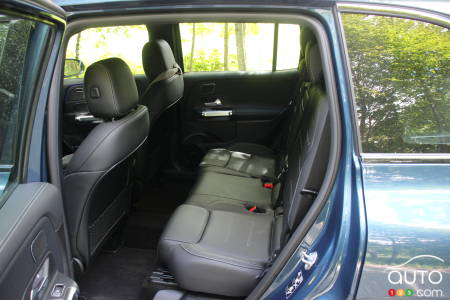 Back inside
The model’s proportions are right on and better than that, it contributes to providing an interior that’s much roomier than the compact styling suggests. Especially in terms of headroom both front and rear, which, even with the big sunroof it has, is generous enough even for taller folks…wearing cowboy hats. It’s that good.

There are a few sacrifices that had to be made, though; the rear seats are very flat – that makes it easier to fold the seatbacks – and that design means that they aren’t that supportive. Rear-seat passengers will slide to and fro through the turns, and you feel much more like you’re sitting atop the seats instead of within them.

Speaking of the third row: well, my tester didn’t have one so I can’t comment, but considering the GLB’s footprint, I wouldn’t expect a huge amount of room and I’d probably prefer to save the $1,300 required to fit it, especially considering you’re hard-pressed to get a GLB 35 for much less than 60 grand out the door. Not to mention that when the third row is up, the room left to pack stuff in the back is likely no bigger than a shelf’s width. Which kind of sabotages the other strength of the GLB’s interior, and that’s its cargo space which measures up to 1,680 litres if you fold the second row of seating. It’s all accessible via a tailgate that opens so high that me and my 6’3” frame could get under without hardly having to duck.

In addition to the price, of course, the third row simply isn’t in keeping with what this AMG 35 version is all about. This is basically a high-performance hot hatchback with airs that remind me more of a Volkswagen Golf R than a luxury crossover. That means I’m probably not going to stress too much if I can’t move seven people on the regular.

Indeed, I’d much more prefer to know that when it comes time to hit my favourite bendy b-road, the GLB 35 is up for it. And boy, is it ever. 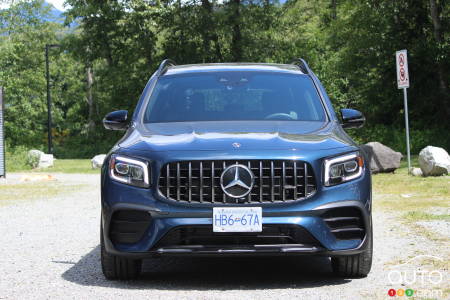 It feels a whole lot quicker than the numbers suggest, though. Peak torque arrives at 3,000 RPM and peak horsepower a couple of grand after that, which means the 8-speed dual clutch transmission has no problem channeling all that power and sending it to the sticky Continental SportContact 6 tires (measuring a fat 255 mm at the back).

Then, it’s just matter of holding on as the GLB 35 races forth with gumption and a ferocity that you don’t get from that many small crossovers. In fact, even the V8-powered GLC 63 – while faster, obviously – doesn’t feel quite as nervy, because it’s heavier than this. This turbo 4-cylinder is a great match for the GLB.

Of course, the GLB’s lighter weight means that its attitude through turns is very good as well, especially if you adjust the damper settings. That can be done a number of ways -- my preferred method was to make use of the wheel-mounted controls – and when set to the aggressive Sport setting, body roll is kept nicely in-check and the GLB moves through the turns just as well as it does under quick acceleration.

You get very little inertia and very little delay in response from driver inputs; instead you get a whole lot of fun. A whole lot of noise, too, because those big tailpipes aren’t just for show. They emit a properly authoritative report that plays well with the somewhat hooligan-like looks.

One real litmus test for a car is how hard it is to give it back at the end of a week of testing-driving it Here, let me tell you, it was hard – perhaps even harder than it’d been for other more expensive cars I’ve tested over the years. While I had asked for it after driving the 250, I don’t think I could have predicted just how much good the AMG treatment would do the GLB. It’s a stunner this. A stunner indeed. 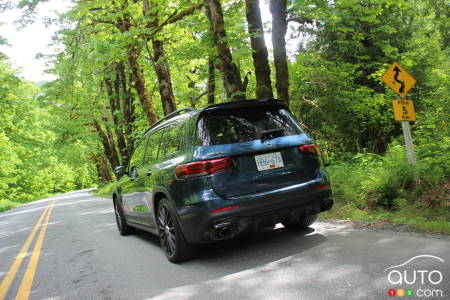 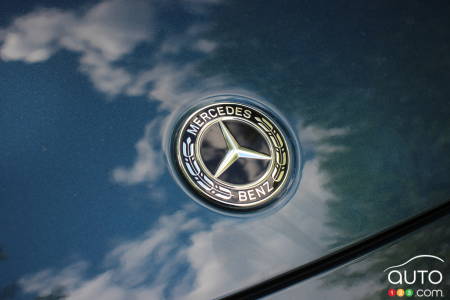 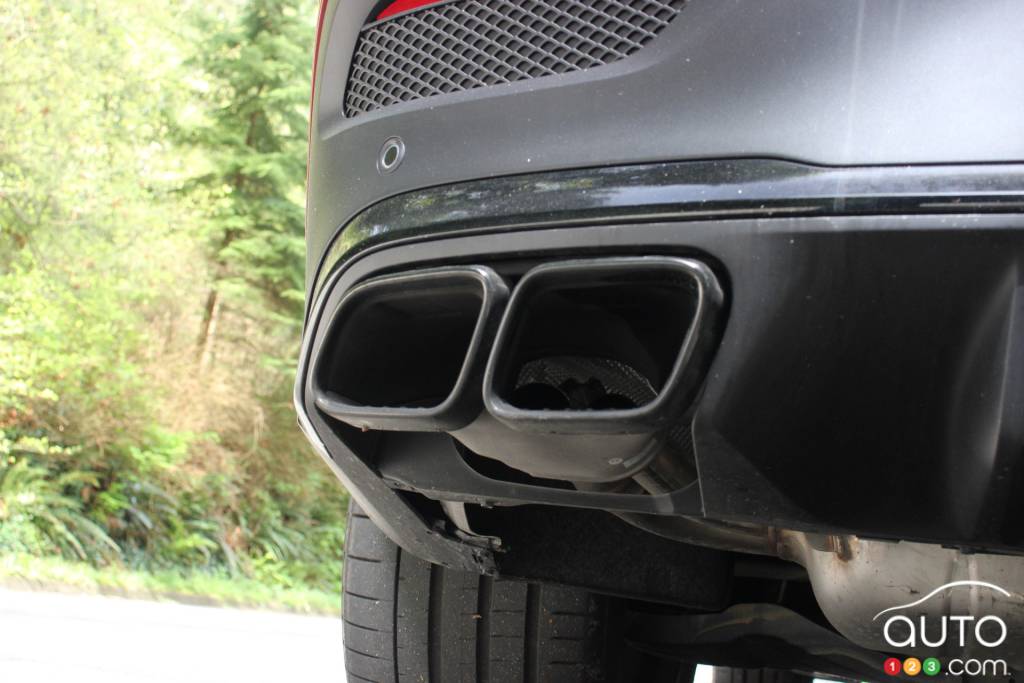 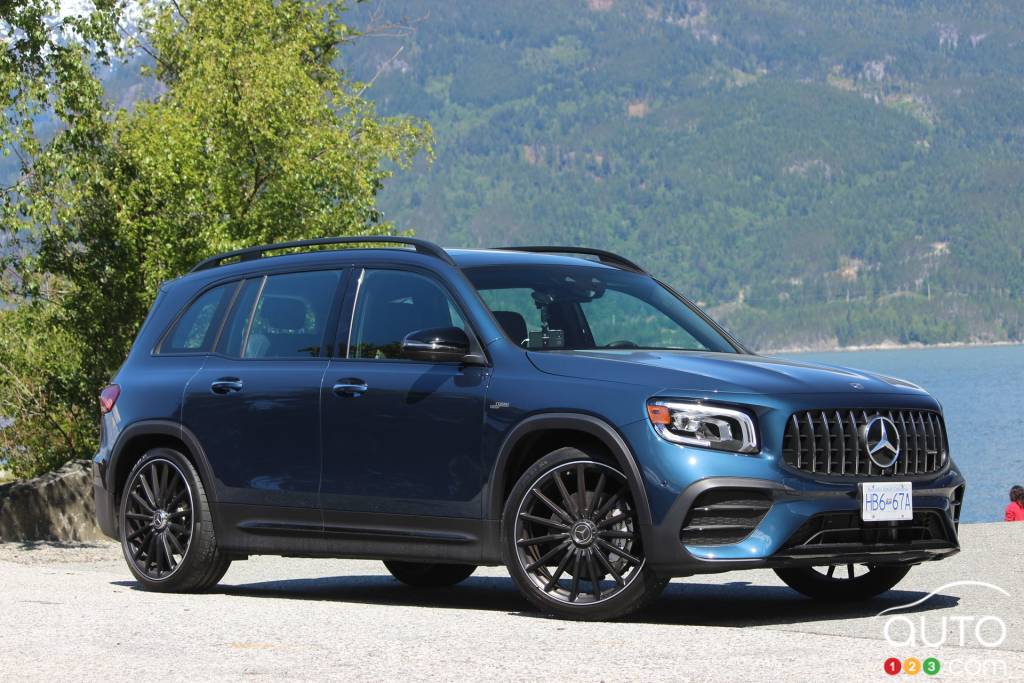 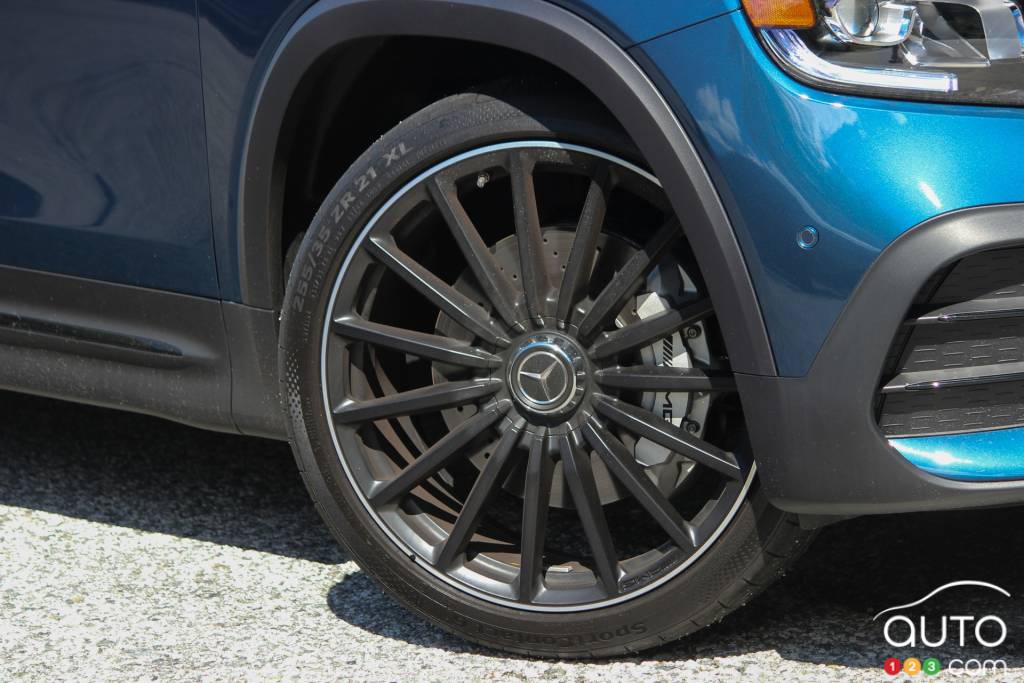 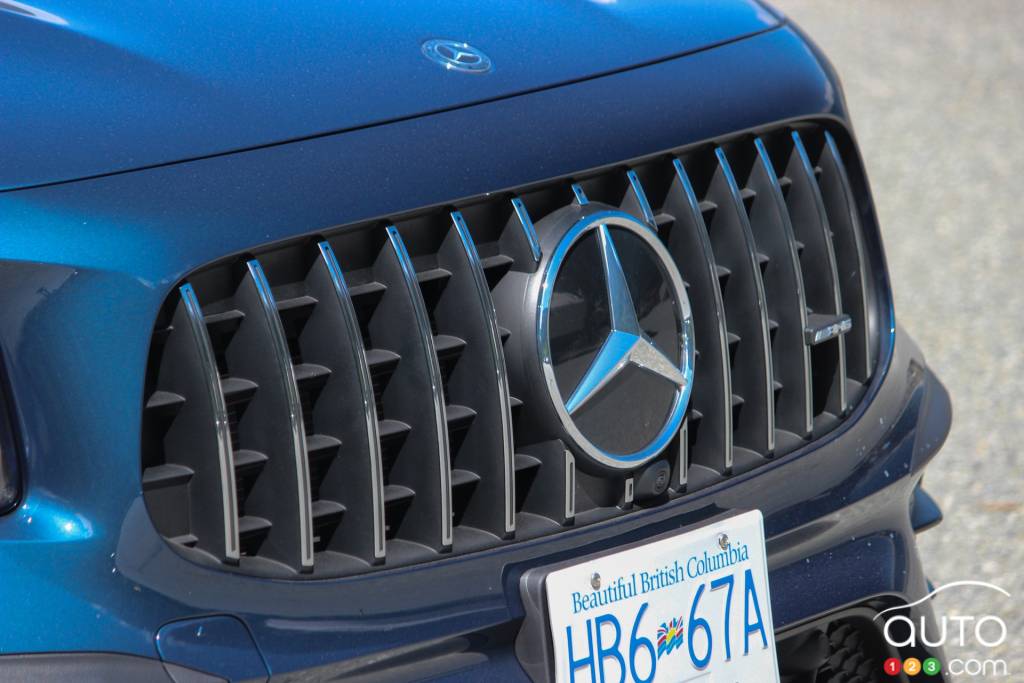