This SUV is so plush it can make you feel like you're getting a hot stone massage while cruising down the highway. What a treat! Automotive columnist: Dan Heyman , Updated: 2021-10-29

The Mercedes-Benz GLS is a luxury three-row SUV, but there’s a lot more to it than that, and a lot of it has to do with that “S” in the model name.

The “S” denotes this particular SUV as the “S-Class of SUVs”, to quote a term used by Mercedes themselves at an event I attended that introduced the GLS’ GL predecessor. That’s high praise because if you know one thing about luxury cars, you’ll know this: the Mercedes S-Class remains one of the industry standards – and a favourite of hip-hop celebrities - when it comes to the big sedan game, and the current version is a technological marvel, as is the technologically advanced EQS EV.

So, then, the GLS has some pretty big shoes to fill.

Well, in the case of my ultra hi-po AMG GLS 63 tester, it starts with some absolutely MASSIVE ‘shoes’ of its own, to use one of hip-hop’s chosen terms for a car’s wheels. How big? Well, for starters, they measure a colossal 23 inches (I’m fairly certain these are the biggest wheels I’ve ever seen on a test vehicle I’ve driven) but that’s not all of it. The size is one thing, but perhaps even more notable is their style. 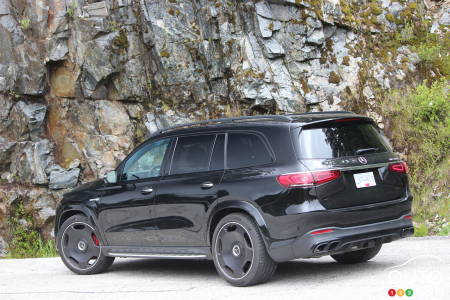 Photo: D.Heyman
The 2021 Mercedes-AMG GLS 63, with its enormous tires

I’m not just talking about the charcoal/black colouring, either; I’m talking about their spoke design which is a clear callback to the great AMG “monoblock” wheels popularized by the great big Benz-es of the 80s and 90s. They are incredibly eye-catching here and I could scarcely believe what I was looking at when I first encountered them. At $2,000, they do cost a pretty penny, but when you have a vehicle that’s knocking on the door of $170,000, $2,000 really isn’t that big of a deal, now is it?

My only beef is with the colour choice. It’s not that I don’t like black wheels, but since the black is surrounded by black tires which are, in turn, surrounded by black paint, the wheels provide a contrast that kind of makes them seem dusty. Luckily, they’re also available in silver, which is probably the way I’d go.

Otherwise, the exterior styling is pretty good. The grille is as big as it should be on a vehicle like this (and is unique to the AMG model) as is the big three-pointed star at the centre of it all. ‘Round back, the quad exhaust outlets are big and the rear diffuser from which they emerge is cool and helps ground the whole look.

The roof spoiler, meanwhile, is the cherry on top and if it’s not already dark enough for you, you can add the AMG Night Package which provides black front splitter and air intake fins, as well as the wing mirrors, side window surrounds and matte black roof rails and tailpipes. 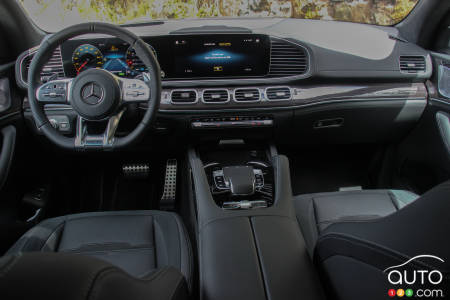 The gauge style can be adjusted, as can the entire theme of the cockpit, and that won’t just change the ambient lighting but will actually alter the attitude of the car. Selecting Lounge, for example, will glow the lighting pink and automatically turn on your audio. Cool, but kinda weird if you happened to be listening to talk radio the last time the system was on; don’t know how many hip lounges play interviews with the coach of your city’s hockey team.

The way you control it all is great as well: you can make use of little touchpads mounted on each wheel spoke to navigate everything from your gauge cluster to your Apple CarPlay. Or, the infotainment display is touch sensitive or there’s a touchpad atop the transmission tunnel. Pretty intuitive stuff. 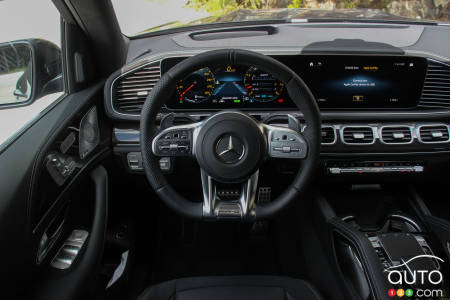 Also intuitive and just plain cool is the augmented reality navigation system that turns your gauge cluster into a camera when you approach your next route instruction. Then, as you get closer, an image of a sign denoting the road you’re to turn on to appears on screen and directionally guides you. No need to squint for road signs anymore - they’re right there on the display when you need them.

All this – especially the theme thing -- becomes a little easier to understand if you think of the GLS’ interior as less of a car interior, and more of a living room. That’s how comfortable and well-equipped it is. I was especially a fan of the seats, which come with a massage feature that offers a number of programs, including one that combines the massage feature with the heated seats to offer something akin to a hot rock massage experience.

Or, if you’re more into performance driving, you can have the seats’ active side bolsters inflate and deflate automatically depending on the severity of the turns, to help keep you more stable in the seat. Even that can be adjusted for different levels of aggressiveness. 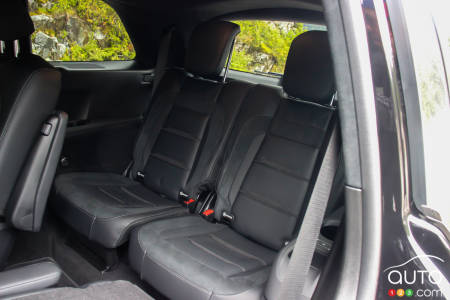 Speaking of the three rows: the room in the front row is good, but the second row could use a little more legroom even if it is adjustable fore and aft. It seems, however, that the space not used for the second row has been put to good use in the third, because it’s properly habitable back there, even for adults. While it will be mostly young ‘uns that use it, it’s still nice to know that an adult could fit.

Of course, keep in mind that the GLS 63 actually isn’t the top of the line when it comes to the GLS. There’s a Maybach version as well, and if you want an even more luxuriously-equipped second row, then the Maybach could be worth a look though it does cost almost $200 grand at base, compared to the 160K the GLS 63 starts at.

But wait, if you’re not necessarily getting the crème de la crème in terms of luxury – though, as we talked about, there are plenty –, then what are you really paying for when it comes to the GLS 63 AMG?

Well, the answer to that one is pretty simple. What you’re paying for is power. Power, power, power. Power to the tune of 603 hp and 627 lb-ft of torque from a biturbo, 4.0L V8, which is sent to the fat Michelin Pilot Sport 4 S tires through a 9-speed AMG Speedshift automatic transmission that can be manually shifted with paddles. Those are pretty nifty, but the fact they’re crafted in plastic takes the sheen off a little bit. 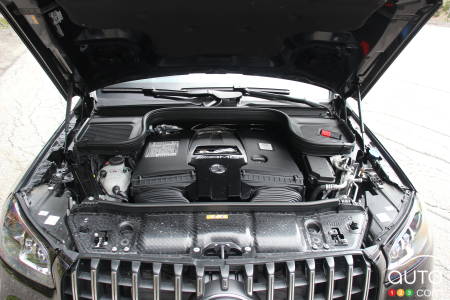 Not that it really matters, though, because when you stomp that throttle – and yes, though this is a luxury vehicle first and foremost, you will want to unleash the beast with some good ol’ fashioned throttle stomping – and hear the bellow from the quad exhaust, everything else tends to fade more than a little into the background.

The engine spools up nice and smoothly, and the transmission snaps through shifts at a furious pace so you will be making authoritative forward progress, though at almost 2,700 kg, that engine has a lot of weight to haul around and even its impressive musculature doesn’t fully disguise that.

Of course, instances where that weight really makes itself felt are very few and far between; this is a powerful hunk of an SUV that deserves the big power it gets, and it makes for an autobahn-blaster the likes of which we rarely see in the segment.

Of course, anyone can drop a big motor in an engine may and call it a day, but the GLS gets all manner of chassis tuning to ensure that the ride is as luxurious and confidence-inspiring as the rest of the package – and the price – suggests it should be. Although it is missing one important piece I would like to have seen.

The big helper here are the adaptive dampers and air suspension. The dampers can respond – individually – to whatever’s going on beneath the car. Pair that with the air-ride and e-Active Roll Stabilization suspension that ensure the body is kept in check no matter what you’re throwing its way. It does a great job of disguising the heft of those big wheels, which can often lead to a rougher ride. The air suspension will also lower itself at highway speeds for better aerodynamic performance and quieter ride. 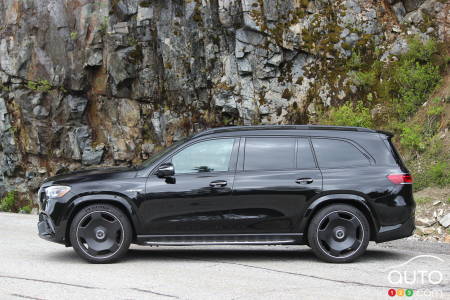 Anyway, as I started my test, I kept asking myself why it didn’t feel as smooth as in the GLE 450 – that’s the GLS’ little brother – I tested last year. Yes, I thought, the more aggressive AMG chassis and big wheels are part of it, but as I went along, I realized I didn’t have the E-Active Body Control feature the GLE has, and nor could I get it with the GLS 63. What that feature does is scan the road ahead and adjust the dampers and air suspension before you even get to the bumps ahead, so they are felt much less as you traverse over them. I would have liked that here.

Not much else to complain about, though. This is a main event of a luxury SUV that, when equipped as mine was, will turn heads everywhere it goes. The manufacturer that has spent years perfecting the formula, and it shows. 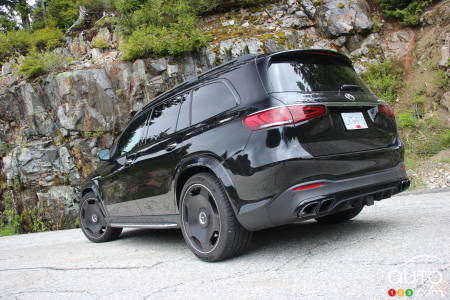 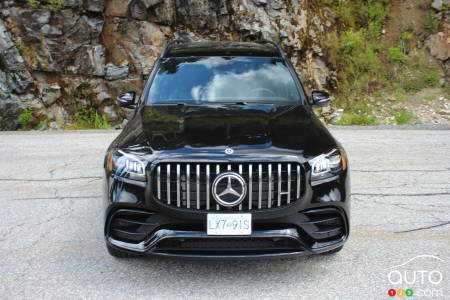 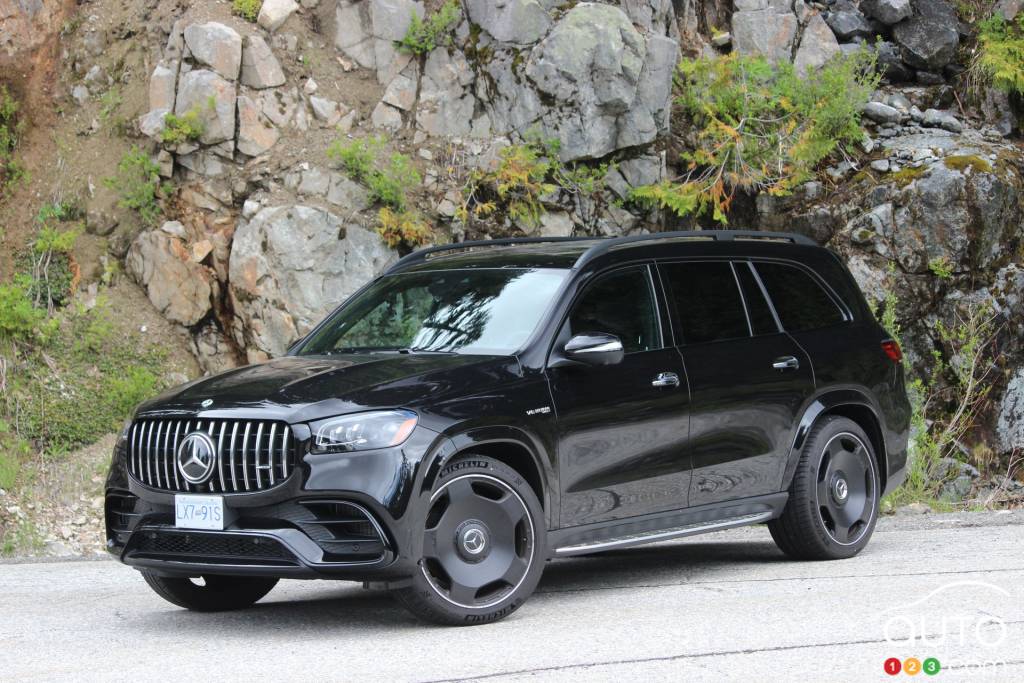 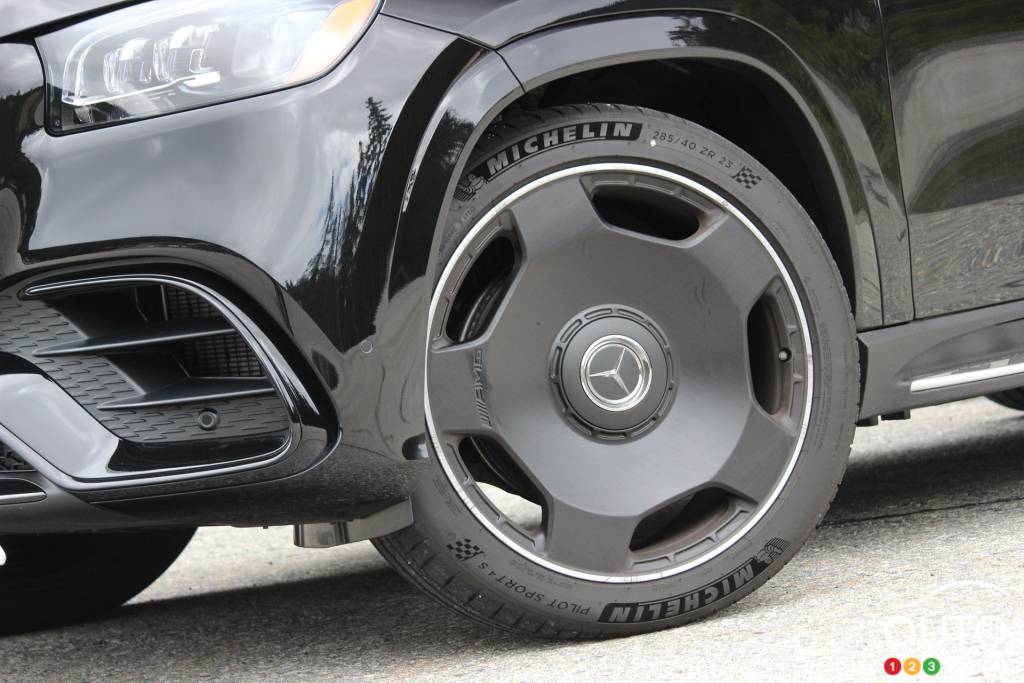 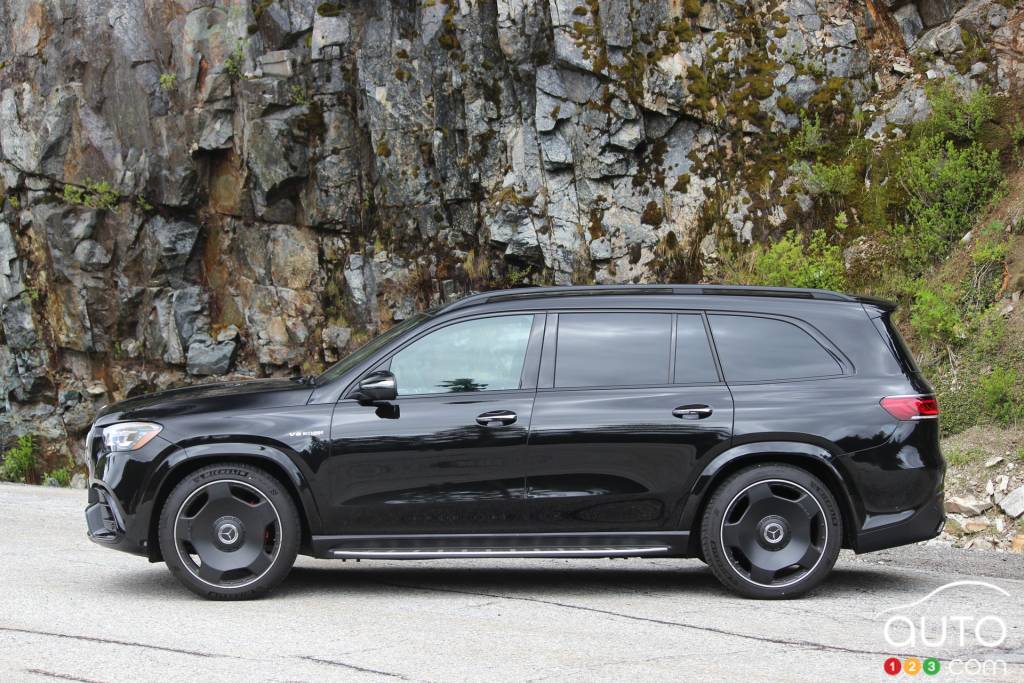 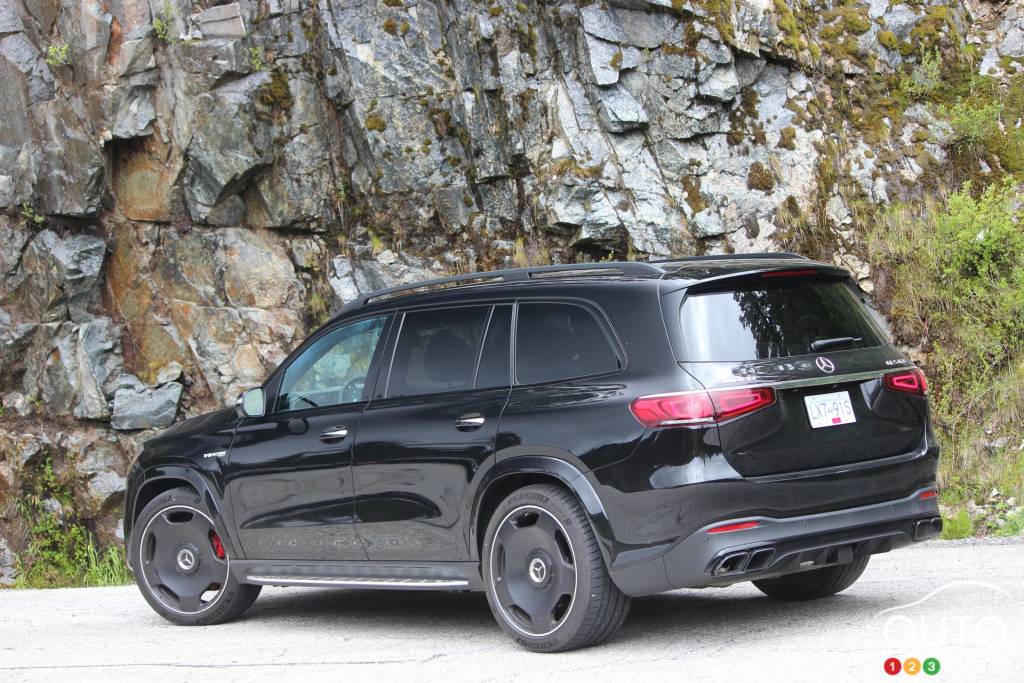 Beyond its appearance, which has its fans and its detractors, the 2021 Mercedes-AMG GLE 63 S Coupe is a fiercely sporty and above all powerful vehicle that w...