Kingston, ON - Manufacturers today have eyes only for utility and pickup models. The passenger vehicle of today has become synonymous with flexibility, cargo capacity and even ruggedness! This has come at the expense of cars, which have lost ground at a remarkable rate in recent seasons. So, what about the minivan category? The format's market share has actually been quite stable, after all there’s a good portion of the population that needs a practical vehicle for everyday use.

It's not for nothing that new generations of existing minivan models are relatively rare. Those consumers sold on the format will continue to buy them, regardless of their untrendy lines or type of motorization; for them, space is the key factor. But we could soon witness a very interesting duel between two hybrid minivans: the Chrysler Pacifica Hybrid (with a plug-in configuration) and the next-generation Toyota Sienna, which, starting for the 2021 model-year, switches to hybrid configuration on all its trims.

For the first time in the category, the space available inside might not be the only deciding factor for buyers. As the industry moves wholesale to electric mobility, minivans will be called upon to reduce their ecological footprint like everyone else. And on that score – it should be noted that few of the minivans Chrysler sells are PHEV variants - Toyota has potentially taken the lead.

Models for everyone... with a budget of $40,000+
It’s now been quite a few years since anyone thought of minivans as super-affordable vehicles. To wit, this year marks the end of the line for the iconic – and truly affordable - Dodge Grand Caravan.

The starting asking price for the 2020 Toyota Sienna was just over $35,000 in its most-affordable version, and the upward trend in pricing is likely to continue: the Sienna LE starts at $39,990 for 2021. Rest assured, however, this entry-level Sienna isn't as bereft of equipment as the Sienna CE models of the past. In those days, the wheel cover was the most memorable detail on the outside of the model. No, the 2021 Sienna LE comes with 17-inch wheels, heated front seats, leather-wrapped steering wheel, power-sliding doors (yessirree!), tri-zone climate control, push-button start and a 4.2-inch multi-function display, plus a 9-inch centre screen. Even better for those who want all-wheel drive, it's available on all trim levels, even the base Sienna LE. The extra charge here is a manageable $2,000.

For $42,990, the front-wheel-drive Sienna XLE is certainly better equipped to accommodate the masses with SofTex seating, sunroof, 18-inch wheels, two long-sliding second row captain's chairs – more on those later - smart key, foot-operated tailgate and side doors (which actually works!), and even a four-zone automatic climate control system. Here, the all-wheel drive system increases the price of the Sienna XLE to $45,390 and comes at the additional cost of one seat (reducing the total from eight to seven), due to weight considerations. 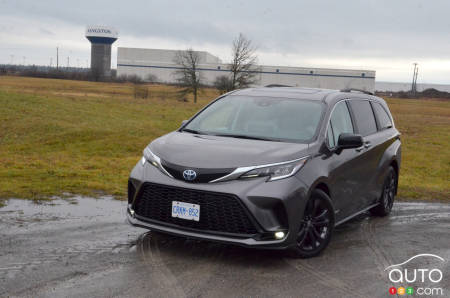 Above the XLE is the sportier-looking XSE with 20-inch wheels for the front-wheel-drive model, and 18-inch wheels for the XSE AWD. Price of admission here is $45,690, and $47,690 if you want AWD. The XSE takes what you get with the XLE and adds high-end LED headlights, sporty suspension and sporty front and rear fascia, not to mention Toyota-connected services with integrated navigation. The Technology Package raises the bottom-line cost to $51,190 or $53,190 depending on the type of drivetrain, and adds some equipment reserved for the most luxurious edition of the range.

At the top of the ladder sits Sienna Limited and its price tag of $56,190 with front wheel drive or $58,190 with all-wheel drive. Here’s where you get the highest level of luxury, at least until the Platinum trim comes along in 2022. We know this is happening because Toyota Canada has confirmed that an upgrade is on the way for next year, so buyers can get a Sienna with even a small refrigerator and a central vacuum cleaner!

A new interior
While the more-expressive exterior design is sure to be appreciated, it’s the inside of a minivan that really matters. Essentially a real living room on wheels for those long trips, the family van of today must be spacious, comfortable and connected, at a bare minimum! Then, while it's not the most sought-after feature of a minivan, a pleasurable driving experience is welcome icing on the cake. And it’s present here, even if the 4-cylinder Atkinson-cycle engine is connected to a CVT-type transmission.

In the front row, a lot of work has been done to hide the “uncool” shape of the vehicle. The new dashboard adopts a linear shape here, imitating the brand's latest models with a large central screen over the climate-system controls. However, what stands out more is the very high centre console that bridges the dashboard, leaving an ideal space for a purse or any other object that you prefer to keep close to you.

Of course, there's no shortage of cupholders on board the Sienna, which includes 15 of them in the LE and 16 in all other trims, or of storage spaces in the doors and cabin panels. Same story for the USB ports, (there are three A and three C ports), not counting the power outlet(s), depending on the model.

Unsurprisingly, the quality of execution is great, and the few hours I spent behind the wheel confirmed to me that Toyota still places appropriate importance on this aspect. However, I did hear a few body noises and these were not caused by a damaged road surface. Nothing major that I could tell, but I’d be remiss in not at least mentioning it.

A 4-cylinder engine under the hood?
Unlike Chrysler, which chose to combine its V6 engine with plug-in hybrid technology in the Pacifica PHEV, Toyota prefers its good old-fashioned hybrid powertrain with no charging cable. The same powertrain as in other recent Toyota hybrids (Highlander, RAV4 and Venza) is found here, a 2.5L Atkinson-cycle naturally aspirated powertrain coupled to a pair of electric motors and a nickel metal hydride battery pack under the front seats, good for 245 hp. For four-wheel-drive versions, the number of electric motors climbs to three with the extra one working the second axle.

The outgoing Sienna’s V6 delivered a very respectable 296 hp, and so the next-gen model, nearly identical in weight, gets less brute power to play with. And yet, I found myself bothered almost not at all by this. Yes, it's true that a 4-cylinder isn't as guttural as a naturally-aspirated V6, and the continuously variable transmission makes the engine's complaints audible during acceleration, but the typical minivan driver isn't looking for an exceptional driving experience.

In any case, apart from the increasing decibel count during acceleration, the rest of the drive is smooth, because that's the advantage of a CVT: once at highway speeds, you can hardly hear the mechanics. Better still, being gentler with the right pedal means you'll be able to drive with ease.

Where the new Sienna shines is in the rigidity of its chassis, which is of the new generation based on the TNGA platform. The firmness makes itself felt on the steering wheel, for example on approaching sharp corners when the Sienna is simply more reassuring.

The verdict
Clearly, someone at Toyota convinced senior management that the minivan segment had to be attacked with purpose. After all, the withdrawal of the Dodge Grand Caravan opens a breach in the category, and Toyota's offer is very compelling, even if the asking price is kind of high at the base of the trim ladder. The technological content included partly justifies that, especially since owners’ monthly fuel bills will be smaller with this new generation of the model.

While the official figures of 6.5L/100 km and 6.7L/100 km (for two- and four-wheel-drive models respectively) may be difficult to record on a daily basis out in the real word - note that I managed to record 6.6L/100 km while being very prudent with the right pedal - an average of 7.5L and 7.7L/100 km should be easily achieved without any driving restraint. Remember, we're talking about a minivan here, not a hybrid subcompact! 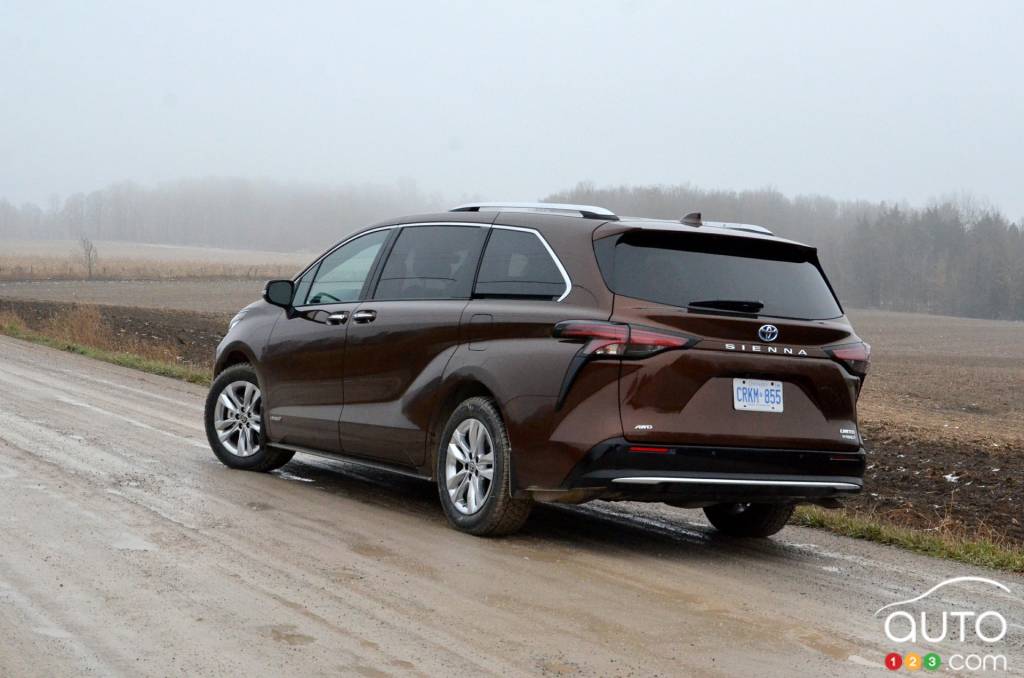 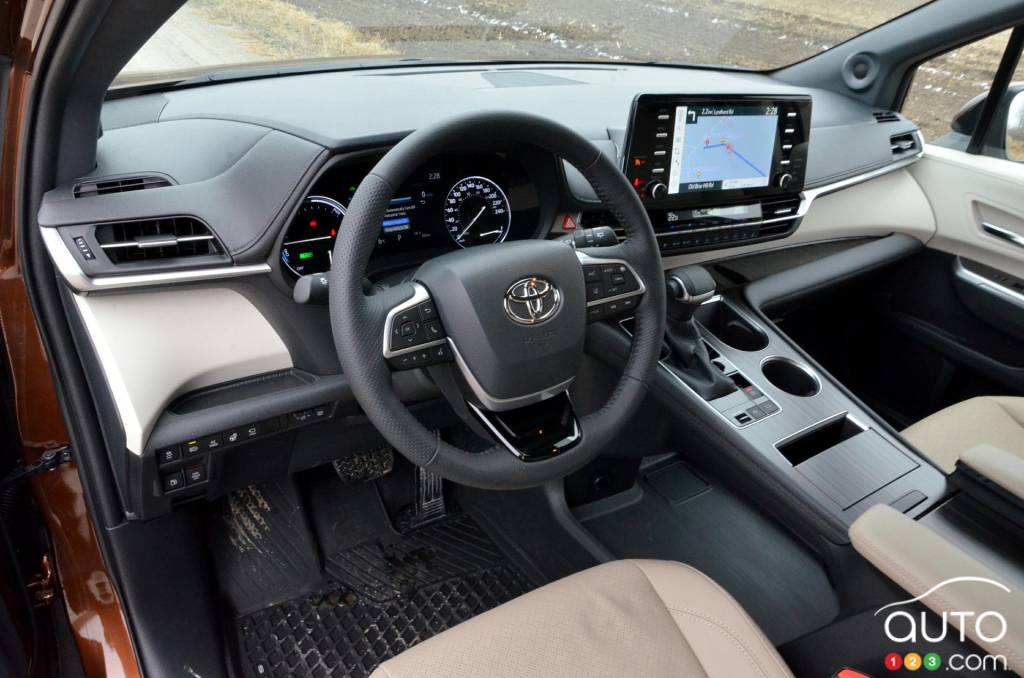 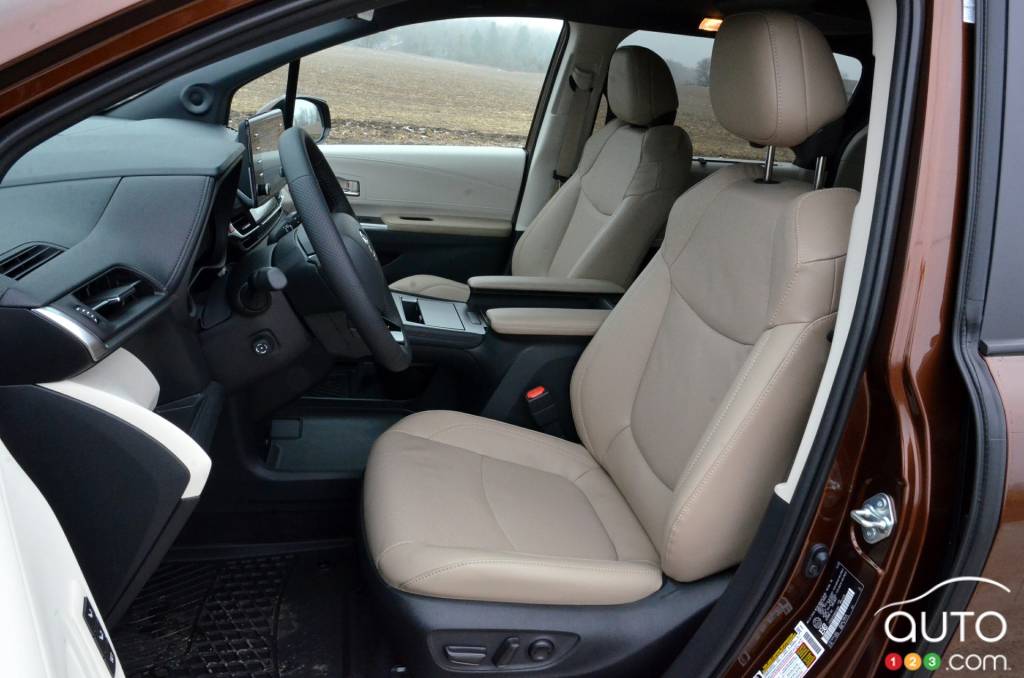 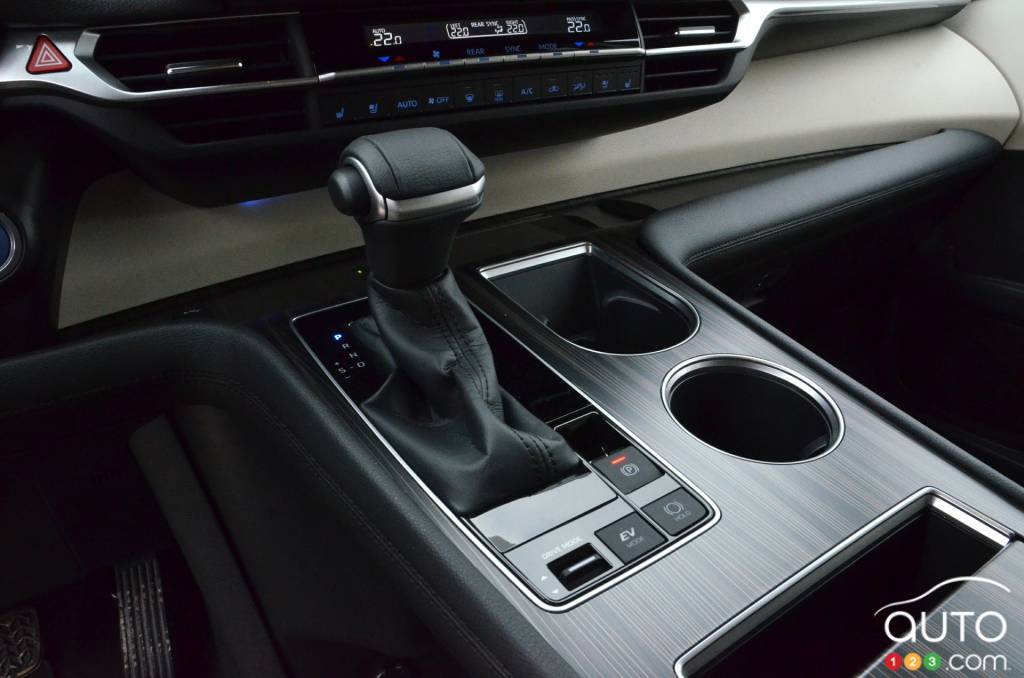 Speed Dating: We Spend an Hour With the 2021 Toyota Sienna

The new 2021 Toyota Sienna gets made over from head to toe after 10 years in much the same shape. We got to see it up close and personal - in person! - at a ...

How to choose between the 2021 Toyota Sienna and 2021 Chrysler Pacifica Hybrid? Auto123 pits against one another two great hybrid choices for families. With ...