Search the planet, in fact search the entire cosmos, right down to the GN-Z11 galaxy located about 13.4 billion light-years from Earth, and you’ll find only one place building the Tundra: at Toyota’s plant in San Antonio, Texas. This is probably smart of the automaker, since the population of the Lone Star state includes thousands of die-hard fans of the big pickup, although instead of stuffed die hanging from the rearview mirror you’re more likely to find a rifle – or two - prominently displayed.

The Japanese manufacturer wants to assemble its truck in the heart of a region where the full-size pickup has been elevated to the rank of deity.

In Rome, do as the Romans do. To sell trucks to Americans, build them where they’re king.

Mind you, that hasn’t prevented the U.S. Big Three from assembling at least some F-150, Ram and Silverado/Sierra trucks in Mexico, in addition to operating plants in Michigan, Indiana and Missouri. 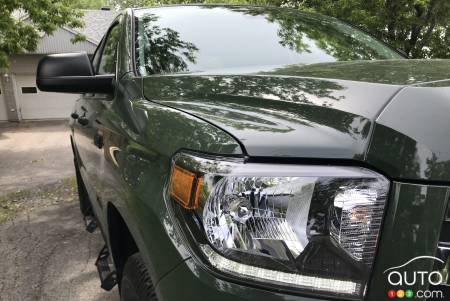 People wanna know
This led me to ask Romaric Lartilleux, Toyota Canada's public relations manager, the following: “When will you stop production of the 2021 Tundra?” His answer: “Sometime in 2021”.

Which is vague as vague can be. It’s about as useful as using the position of Venus in the third quadrant relative to the Black Moon to plan your day.

Undeterred, I continue with a brilliant follow-up question: “Will this be the signal to start production of the 2022 Tundra in the same place?”

“When is this 2022 model expected at your dealerships?”

“When will you introduce the 2022 Tundra to us, your journalist friends, those who work 24/7 to make your products better known to Canadian consumers?”

For the benefit of young readers who aspire to be automotive journalists when they grow up, this is a common response in our wonderful industry, but don't let it bother you or make you consider becoming a monk instead. Part of our job is to continue to ask questions that the manufacturer will only answer if it has decided that the timing serves its secret agenda. From time to time, we remind ourselves that we still have a choice: wait with zeal for the high priests of the piston to finally open the floodgates of information so we can feed our news-hungry readers, or climb a tree with a telephoto lens around our neck to survey the area around the Texas plant in hopes of photographing a camo’d test vehicle that could be the 2022 Tundra.

On the other hand, you might not be entirely wrong in thinking that you’d endure less obfuscation if you spent your time interviewing politicians.

Normally, my colleagues and I sit in front of our computers and wait for the news to fall from the sky. But we hear stories of some automotive paparazzi collecting big checks when they get a scoop. Which is well-deserved I guess since sitting up on tree branches can be a risky endeavour. 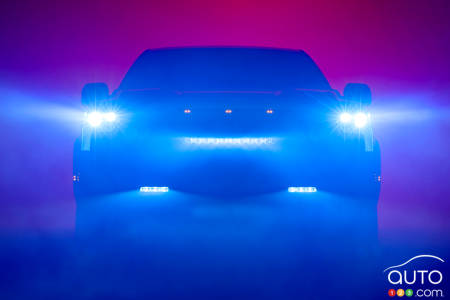 And so, from the safety of my living room, I went for one last salvo that, surely, my opponent in this chess match couldn’t resist: “Basically, Romaric, what can you tell me about the 2022 Tundra that won't cost you your job?”

At that, my friends, you only have one option left if you’re not ready for the tree branch: snoop around online.

According to rumour
“O magical Web, what good things can you tell me about the 2022 Toyota Tundra?”

The sources are many, and frankly most repeat the same rumours that circulate in a loop. So you might as well rely on MotorTrend, home to a team of seasoned journalists and battered and bruised tree-climbing spies used to coming up with dirt. According to them:

- The V8 (also found under the hood of the Sequoia, the Lexus LX 570 and the legendary Land Cruiser, not sold here), will bow out and be replaced by a series of V6s, the first borrowed from the LS 500 limousine, the second (the Tacoma's?), more affordable, and probably a third that would showcase the science of hybrid powertrains that Toyota has mastered like no other. One thing's for sure, the fourth-generation Tundra won't be able to continue to be satisfied with a fuel-consumption rating of 17.0L/100 km even when you treat the throttle with the gentleness of a mother cat towards her new kitten.

- While I find the simplicity of the current dashboard easy to navigate and like that the touchscreen audio system is compatible with Apple CarPlay and Android Auto, the 2022 model will have no choice but to offer a more-modern multimedia system, one in which an optional 12-inch screen should take pride of place while deploying the ultimate version of Entune infotainment software.

- The exterior of the next Tundra will look even more rugged, based on a brief video released in May, in which the truck's grille can be seen through a veil of fog, and then through photos smuggled out from a dealer meeting. Since even Lexus’ SUVs now sport distinctive front ends, we expect the big pickup to have a build worthy of inclusion in a Mad Max move.

- But that won't stop it from delivering a great drive. The old-fashioned leaf springs in the back will certainly give way to coil springs that should eliminate any bouncing.

- Since the current 2021 Tundra is already loaded with driver aids and electronic safeguards (Safety Sense, Star, a myriad of airbags, etc.), which Toyota is already spreading throughout its lineup of both cars and trucks, the 2022 is certain to be upgraded in this regard.

- For the time being, because you can get, for example, a base F-150 with a V6 and a two-door cab, while an entry-level Tundra comes only with a V8 and four doors, it's not surprising that the lowest prices are in the Ford truck’s favour: $36,000 for the least expensive F-150 and $47,000 for the most affordable Tundra. The 2022 version should lower this cost of entry.

Derived from the SR5 Plus, the “new” 2021 Tundra Trail CrewMax 4x4 version that I’ve been driving costs $51,320 (plus shipping and preparation). For that you get exclusive dark grey TRD off-road wheels, Predator running boards, the same grille as the 1794 Edition with a colour-matched frame and black cloth seats with brown stitching.

“Our Texas plant is running at 100 percent capacity and each truck being built is sold without us having to offer major incentives,” says Romaric Lartilleux.

The 2021 Tundras expected by Pierre Larose, sales consultant at Gareau Toyota in Val-d'Or, Quebec, are all pre-sold. He'll be receiving more in July, and you'll have to pray hard to get the version of your dreams in the inventory.

If you decide to go for the 2022 Tundra over the 2021 now in its twilight, one thing's for sure: Toyota will continue to compete with the Americans by offering a big truck that's made in the U.S., but put together with the attention to detail you expect from the Japanese automaker. 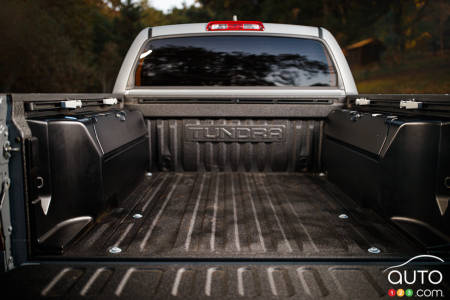