There are many different types of moves. The type your employer takes charge of, when you don’t have to do anything, and when the movers even pack up your stuff, right down to your socks and underwear. Then there’s the slightly more shambolic one, when you bribe a bunch of friends with beer, pizza and random old pieces of furniture to come lend a hand. And then there’s moves like mine.

20 years in one home, a big house, inhabited by a collector of virtually anything and everything and a incurable sentimentalist who still chokes up on seeing that souvenir his parents brought back from a trip to Spain when he was a kid. A perfect recipe for a quick and tidy move. All the boxes my local grocery store provided me still weren’t enough.

Fortunately, the Tundra was there. 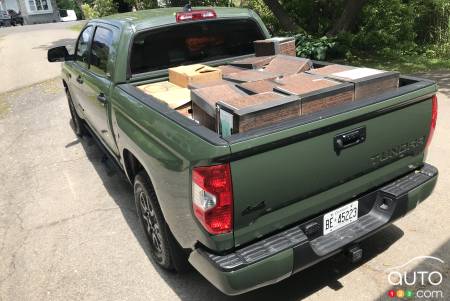 Boxes, boxes, boxes
Before the movers showed up, I made a number of return trips between old home and new, in the hope of course that would make the final bill lighter, but also to try to prevent any damage to certain of my most prized possessions, for example the hedgehog fish I brought back long ago from Cuba, spikes still intact thanks to the tender loving care it’s received over the years.

My 2021 Tundra SR5 Trail (prices $53,690, including transport and prep) swallowed it all up in its bed and in its cabin. The latter, by the way, comes in two sizes: Double Cab and CrewMax. The difference between them lies in the rear bench. The doors that give access to that space are oversized, and Toyota has enlarged the space available to passengers/gear by one foot, and in turn shortens the bed to 5.5 feet.

If you want a 6.5-feet bed, you have to go for the Double Cab configuration, the only one that also can integrate the 8-foot bed (I should say 8.1 feet, which Toyota surely did just as a raspberry to segment leader the Ford F-150 and its 8-foot bed).

The 60/40 split seat of the bench comes down flat to give users a vast floor able to welcome all manner of stuff. Everything fragile coming out of my old castle destined for my new one was placed carefully and lovingly within that space. 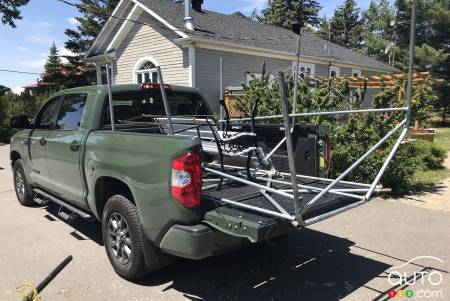 To get the most out of the short bed, I mostly drove with the tailgate open. That meant having to properly batten everything down, just to make sure the driver behind me didn’t get my Tintin books right in their windshield.

Fortunately, the panels of the Tundra’s bed feature a number of rings and movable pegs (on rails) inviting you to practice the knots you learned back in your boy scout days.

Not everything is perfect, however. For example, when double-checking those knots you’ve made, you have to be a bit of a tightrope walker to climb on the bumper, though it is covered with a non-slip surface. On the other hand, you'll find Predator running boards beneath each of the four doors, a feature included in the $3,640 Trail package, which is the big new feature for 2021. 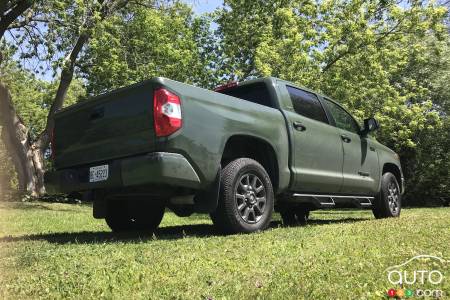 For hauling and pulling
Full-size pickup truck enthusiasts are usually concerned with two statistics: towing capacity (what's the maximum weight of the thing - trailer, boat, etc. - I can tow?) and maximum payload (how much weight of other stuff can I cram into the bed without affecting the ride and torturing the suspension?).

Here are the answers: Properly equipped, the Tundra can tow up to 10,000 lb and carry about 1,500 lb. American models can do that much, if not more, but unless you’ve bought the Olympic Stadium and want to transport it to your backyard, all half-ton pickups (an old-fashioned reference to load capacity that modern trucks have long since exceeded) are all capable of doing the jobs they were created to do.

That said, to do so with a minimum of skill, two ingredients are essential: torque to spare and traction that won't spin out at the slightest puddle of mud. 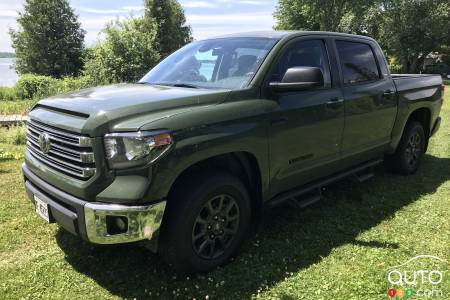 The traction side of things is taken care of, since Toyota only offers Tundra 4x4s. In corners negotiated with an empty body (which happened to me), I never had a problem with the handling, although more-incisive steering wouldn’t be unwelcome. However, it's obvious that the leaf springs in the back need to be upgraded, especially compared to the American rivals, which have discarded that ol’ bouncy behavior in favour of a fluffier ride.

In terms of muscle, Toyota didn’t mess around either, giving the Tundra a 5.7L V8 that develops 381 hp and 401 lb-ft of torque, all coupled to a 6-speed automatic transmission (which also doesn't make the model any younger).

This explains both the towing and load capacities, but it also betrays a certain delay compared to the competition. Indeed, this very robust and reliable engine is also very greedy. Even with a respect for the throttle that bordered on the skimpy, I had a hard time getting it under 17.0L/100 km.

As my colleague Daniel Rufiange told me, “It's worth owning shares in a petroleum company when you drive a Tundra”. 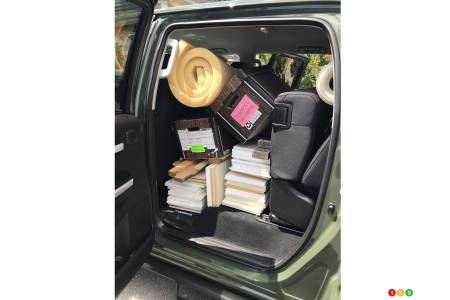 Pierre Larose, a representative of Gareau Toyota in Val-d'Or, doesn't shy away when it comes to the gargantuan appetite of his truck: “What do you want, it's a big truck that consumes gas. I call a spade a spade!”

Toyota’s American rivals also offer V8s, but while they do so they include more-frugal variants alongside them. Ford alone has half a dozen more efficient engines in its arsenal, including two EcoBoosts, a turbo-diesel, a hybrid and even the 100-percent electric technology of the future F-150 Lightning.

That said, I'm convinced that Toyota is preparing some nice surprises for the day it introduces the next-generation Tundra, which should be by the end of the year. For the moment, the secret is well-kept; we know almost nothing about the new 2022 model, but it would be inconceivable for the champion of hybrid powertrains not to give its new Tonka with a greener configuration.

We'll talk more about that in Part 3 of our long-term review. In the meantime, I'm happy to report that, despite all my fully loaded trips, nothing was broken in my junk box, not even stuff of dubious taste that basically only deserved a one-way trip to the nearest recycling centre. 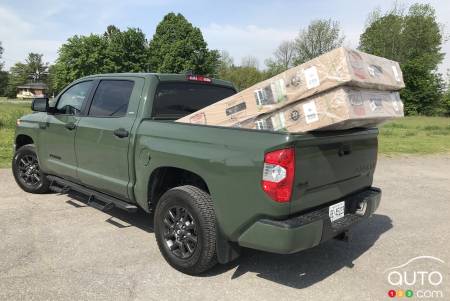 The 2022 Toyota Tundra TRD Pro is a hybrid-powered off-road monster. By the way, in this model, electrification is clearly aimed at boosting performance rath...