Auto123 puts the 2021 Toyota Tundra to the long-term test. Today, Part 1: There’s a mastodon in my driveway.

I have a 2021 Toyota Tundra CrewMax SR5 currently parked in my driveway. There are at least three good reasons why I have brought this mastodon home with me.

The numbers tell the (a) story

We know that trucks of all kinds (so pickups, SUVs, minivans and the like) are overwhelming cars (by which I mean passenger cars like sedans and coupes) on the market.

Now, if you take away SUVs, crossovers, minivans and vans (hello Amazon!), what's left are pickup trucks, divided into two categories: compact (some prefer the term midsize) and full-size.

The seven compact pickups offered in Quebec (namely, the Tacoma, Ranger, Colorado, Canyon, Gladiator, Ridgeline and Frontier) totaled 8,186 sales in 2020, or only 3 percent of all trucks sold.

Only compact SUVs, led by likes of the Toyota RAV4 and Honda CR-V, did better last year, with sales totaling 78,742 units in La Belle Province. 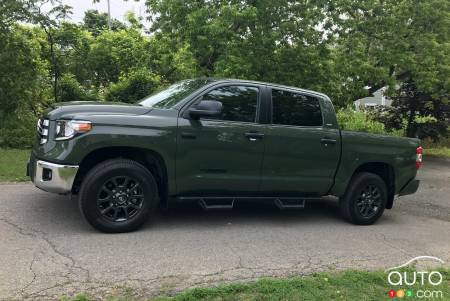 Which brings me (finally!) to my very first reason for creating more shade on my house by parking a Tundra in my driveway. Now, I start with a question (because we journalists do love to ask questions):  What on earth is driving so many Quebecers (and Canadians in general) to buy such a big vehicle? A vehicle that can make any driver break out in a cold sweat when it comes time to park. And a vehicle that can bust budgets, both at the dealer and afterwards at the pump.

The answer to my question became apparent within a day or two of getting behind the wheel of the Tundra...

Feel like shopping at Costco or IKEA? Just drive your Tundra there; with what you fit in there, they'll give you a gold member card in no time.

The plans for your cute little garden call for wooden borders? Forget the puny planters and go get yourself some railroad beams.

I'm telling you, when you drive around trailing a six-foot bed, all you want to do is fill it! The smallest DIY project turns a trip to the hardware store into a fun party. Expensive, but fun.

The second reason I chose the Tundra is that 1,795 Quebecers bought one in 2020.

These folks could have emulated the 19,342 fellow citizens who preferred the F-Series, helping make the Ford F-150 the best-selling vehicle in Canada for the 55th consecutive year.

They could have told themselves that the Tundra is mechanically in the dinosaur age, that the current third generation has been around for 14 years, that other trucks’ interiors are far more modern, and that maybe it's a good idea to stay away from a model only offered with a 5.7L V8 that drinks like a camel after three return crossings of the Gobi desert.

Nevertheless, they chose the Tundra. But why?

Photo: M.Crépault
The 2021 Toyota Tundra CrewMax SR5, in your face

I asked both buyers and sellers of the model. They all gave me the same two reasons: Reliability and resale value.

“It's true that Toyota's reputation for reliability is always there, but that's normal for the Tundra: it doesn't change”, explained Frédéric Dumas, sales representative for the past seven years at GM Paillé, a dealership in Berthierville (and Sorel-Tracy) Quebec known for its truck expertise.

That constancy was picked up on was well by Romaric Lartilleux, big cheese of public relations for Toyota Canada, who explained that “The Tundra's reliability and resale value - both best-in-class - make it a must-have vehicle in this segment, even if it’s true that its sales volumes are not comparable to those of the three American manufacturers (the D3, with "D" standing for domestic)”.

He added that “since the Tundra is focused on the retail market and not the large fleet market, these volume differences will always exist”. I should explain that those “D3” automakers really court companies, which place big fat orders to fill their fleets and thus can inflate vehicle sales statistics.

Romaric had more to say (I think he likes his company’s truck a lot): “While we see the Tundra improving its overall share of sales year after year, our intention has never been to compete with the D3 products, but rather to add a powerful and differentiated product that offers consumers an alternative to domestic trucks. The Tundra offers the qualities our customers look for when shopping for a full-size truck.”

We'll come back to those qualities that struck home to me in daily driving in the next chapter of my long-term test drive. As it happens, that daily driving included an event that provided me with the third very good reason to have the Toyota Tundra parked in my driveway: I was moving.

Quick quiz: How much stuff can one accumulate after living in the same place for 20 years? The answer is, more than one could ever imagine!