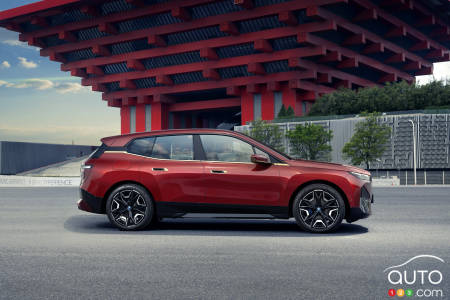 BMW has really accelerated its efforts to electrify its vehicle lineup in the past year or so. The German automaker, a pioneer in the luxury electric niche with the exotic i8 launched in 2015 and the i3 city car that appeared a year before that, started launching the second generation of its electric vehicles last year (although technically, the electrified powertrain we see now is already in its fifth generation).

With those two early models (the i3 and i8) now in the rearview mirror, BMW has entered the electric fray anew with two far more modern EVs that are certainly better suited to the needs and wants of North American motorists. I’ll make the world’s easiest prediction and say the new electric duo will outsell those two early electrics, by a wide margin.

The i4 and iX
After the i4 sedan-coupe, which we reviewed earlier this year, here comes the more singular 2022 BMW iX, a purely electric crossover that, unlike the i4, is styled to be completely out of the ordinary. Next to this SUV, the Tesla Model X looks generic. For our test drive, we drove an xDrive50 version, the more powerful of the two “regular” versions of the iX, while we all await the super-powerful 610-hp iX M60 edition still to come. 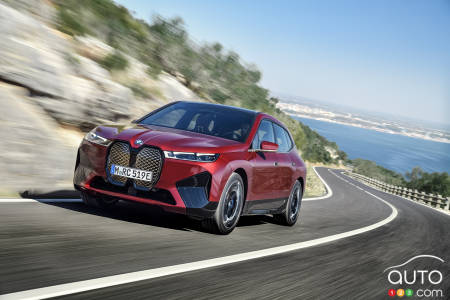 Polarizing opinions
The least you can say about the iX is that it doesn't look like any other vehicle currently on the road. We certainly recognize some of the brand's typical traits, like the giant double grille and slimmed-down headlights, but there’s no mistaking this electric SUV for the more conservative 4 Series. The BMW iX is still not seen much, but it turns heads wherever it goes, especially when people realize that this big vehicle doesn't make any sound – save for maybe the rubbing of the tires on the dusty springtime pavement.

Our tester came equipped with 22-inch wheels (available as an option) and all-season tires, which are more appropriate for this time of year. Needless to say, those oversized hooves fill the SUV's muscular wheel arches quite well. It's also worth mentioning that the Aventurine Red Metallic III body colour paired with Titanium Bronze finish is not a typical combination for a German brand product.

Safe to say, the BMW iX is going to polarize opinion among fans of the brand, but so far it appears the company made the right play, since buyer interest has been very robust, we are told. Not bad for a vehicle with a base price of over $90,000. 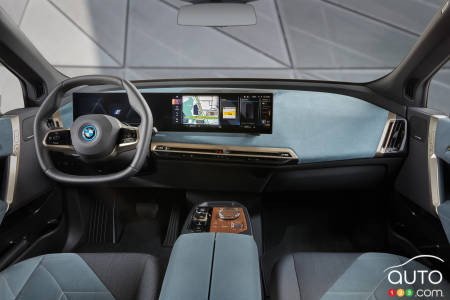 Even more daring inside
So you find the iX's silhouette unusual? Take a look at the interior. That's the beauty of electric platforms. Thanks to their much more compact motors, they allow for completely different layouts than what's currently available in gasoline-powered vehicles.  In the front, for example, the flat floor frees up a ton of space between the two passengers, with the console not “attached” to the dashboard.

The seats are also very comfortable, both in front and in the second row, which also benefits from a flat floor, and those consigned to sit there will have no complaints. But let's get back to the front, where the iX displays its technology on a large, curved, “floating” screen. In fact, those who know the brand will have a learning curve to deal with. What’s more, this large panel made up of two screens (one behind the steering wheel and the other, touch-sensitive, in the middle) will soon be found on all the brand's models.

The iX innovates with this centre console on which a few haptic feedback buttons are mixed with the entertainment-system knob, a knob for the audio system volume control and a tiny gear-shift lever. A little lower down, so as not to clutter up the space between the two passengers, there are two cup holders and even an inductive charging pad for smart devices.

As you’d expect from a BMW, the content of the infotainment system is very complex, the brand being addicted to applications and settings of all kinds. Also worth mentioning is the hexagonal steering wheel, which is rather massive to hold, but which nevertheless faitfully transmits info on the road underneath. The only downside when it comes to the interior is that the trunk, although roomy, suffers from the steep angle of the tailgate and the very wide walls on either side of the cargo area. The cargo volume is more like that of the X3.