Auto123 gets in a first drive of the 2022 Mitsubishi Outlander.

Mitsubishi products were first introduced to Canada in the 1980s and 1990s, when Chrysler offered variants of the company's models. Think of the Eagle Vista and Talon, the Dodge Colt, etc.

In 2002, the company officially opened for business in Canada as an independent car manufacturer. Its first years after setting up shop were marked by more than one highlight, among them the launch of the Lancer and, in 2004, the introduction of a 10-year powertrain protection warranty that reset the industry standard.

That same year saw the company introduce a model by the name of Outlander. Along with the Lancer, it gave the brand credibility; since the departure of the Lancer from the landscape, The SUV stands apart as the star performer of the brand’s lineup.

Mitsubishi’s journey has not always been easy, however; the company isn’t awash in capital, so product renewal and innovation have always had to be done within tight budgetary limitations. In 2014, when the Outlander was redesigned, the change was rather mild, with the mechanics and other elements remaining unchanged. Fortunately, the SUV did find and retain its audience, helped by the fact that it could be had with a V6 engine, a rarity in the category. And it has always been reliable.

But time waits for no one, of course, and the model has aged along with the years. The Outlander was regularly redesigned, including in 2016 with it inherited a front grille that quite frankly still makes me shake my head. Still, the arrival of the plug-in hybrid version two years ago gave the model a serious boost, nearly doubling its domestic sales.

And yet the Outlander continued to age; it needed help. And help came with the alliance Mitsubishi entered into with the Nissan/Renault group. Within that context, we learned a little over a year ago that the next generation of the Outlander would benefit from Nissan's know-how, in particular as it as put to use on the Rogue SUV.

The fruit of this association is now the model Mitsubishi is introducing for the 2022 model-year, and it’s the model we test drove for a first time last week. 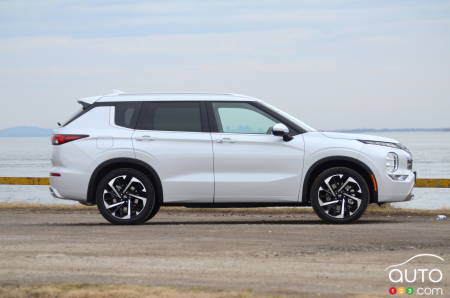 A Rogue in disguise?
We alluded to it earlier, the new Outlander is built on the Rogue platform. It also uses the Rogue's engine and transmission, and inside, the instrument cluster is virtually the same, as are the multimedia system, head-up display and other features.

Fortunately, or unfortunately, there's no such confusion on the outside. At the front, the Mitsubishi signature is either pleasing to the eye, or it's heartbreaking. Let's just say that the design is busy and confused. Personally, I don't like it, but taste, being personal, is not the issue. What worries me more is what will be the reaction of consumers who might dislike what they see. Mind you, that didn't stop the company from growing sales with the model in recent years, with a look that was less attractive than the new edition’s. One thing's for sure, the Outlander’s exterior is different and for that you have to give credit for originality to Mitsubishi. 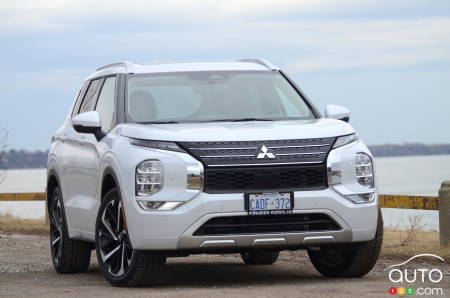 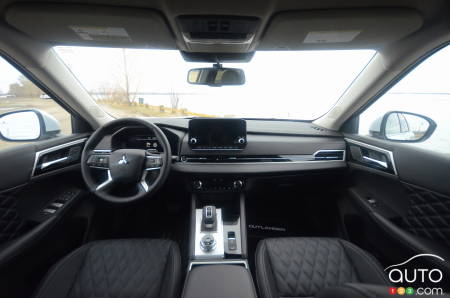 And on board, the automaker’s designers and stylists has worked hard enough on the layout to make the interior feel like a Mitsubishi interior. The steering wheel is distinct, as is the design of the dashboard. In this case, the integration of the air vents in the horizontal strip that cuts the dashboard in two is a success.

In the GT version we drove, the quilted leather of the seats gives a most beautiful effect, by the way. Compared to the outgoing model, inside the Mitsubishi is a significantly upgraded, more-pleasant place to be.

Then there's the seven-seat configuration, once offered (briefly) with the Rogue. It's there to help out, of course, because asking an adult to sit in the third row would be cruel and unusual punishment. But in a pinch, especially with kids involved, it’s fine and even a plus.

And of course, Mitsubishi’s excellent all-wheel-drive system is in place. Not including it would have been shocking to the point of being unthinkable. We're talking about a super-efficient system that's simply superior to the one offered by Nissan.

Overall, then, it would be selling the model short to say that the Outlander is just a Rogue in disguise. 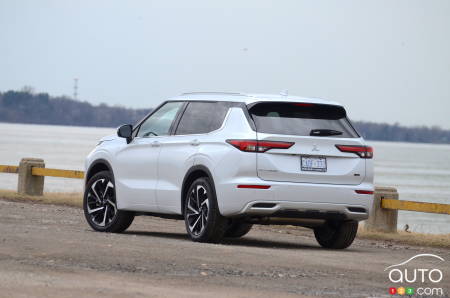 Handling
This is also true on the road. Not that the difference between the two models is huge, but each manages to have its own identity. The Rogue is a little more agile, while the Outlander is a little clumsier. It's heavier, too, by a few hundred kg, depending on the version. While comfort is very decent on the road, roll is also more noticeable when you push the vehicle on curves. Although once you send it into a corner, the suspension elements (from Mitsubishi) do what they have to do to keep you on the straight and narrow.

All in all, while we weren’t blown away with the handling, more importantly we were not disappointed.

If there's a downside, it's that the 2.5L engine has more difficulty pulling the model out of its inertia. As a result, starts are more laborious. Once the model is up and going, however, there’s sufficient vigour in the powertrain and acceleration is quite decent for overtaking or when on-ramping to the highway.

In general, this is a decent product. Those who want something really dynamic already know they’ll get it from a Mazda CX-5, for example, and not so much here; but if comfort and space are what you're looking for, you'll find the Outlander fits the bill. 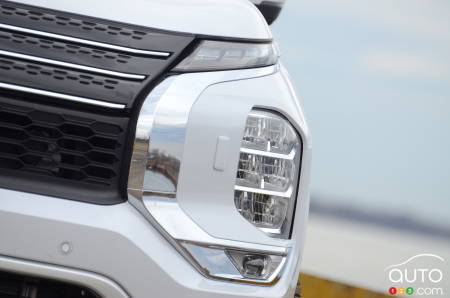 Product range
There are seven versions of the new Outlander on offer, and frankly the offer of equipment is generous from the start. Some things could be added to the lineup sooner in the trim range (power-adjustable driver's seat, for example), but on the other hand, you get wireless smartphone charging starting with the second version. Here are some of the features that come with each model.

LE Premium ($38,238): This version adds a leatherette interior and power controls for the driver's seat. 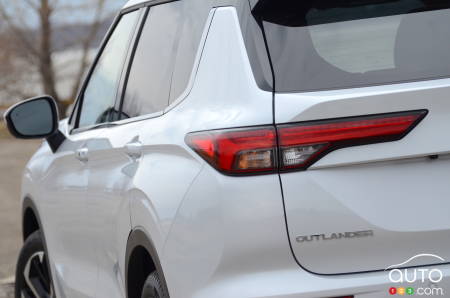 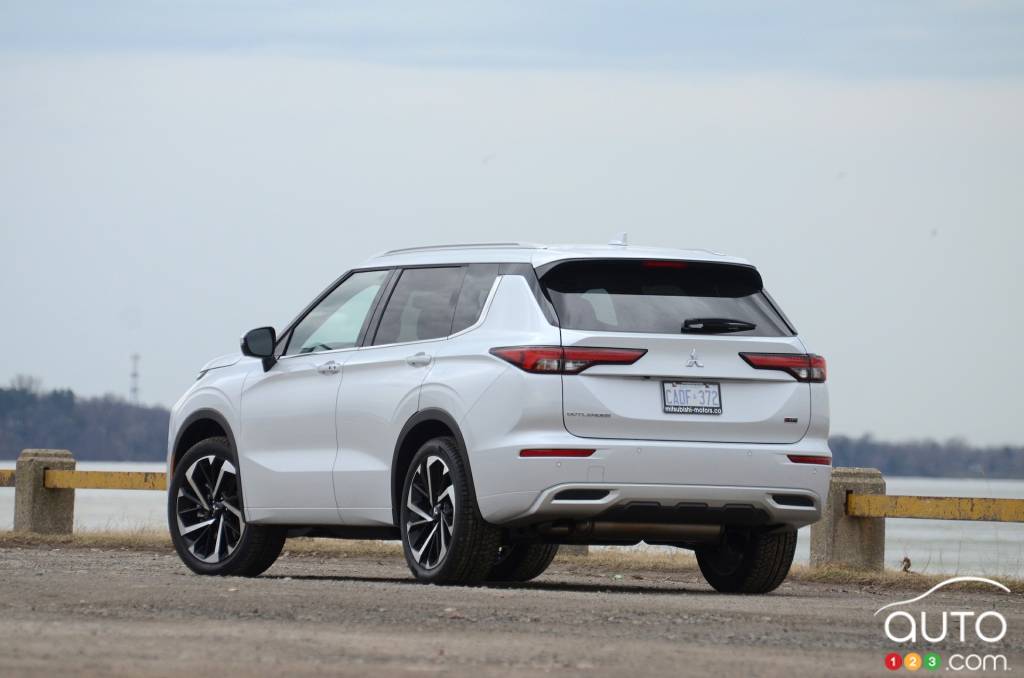 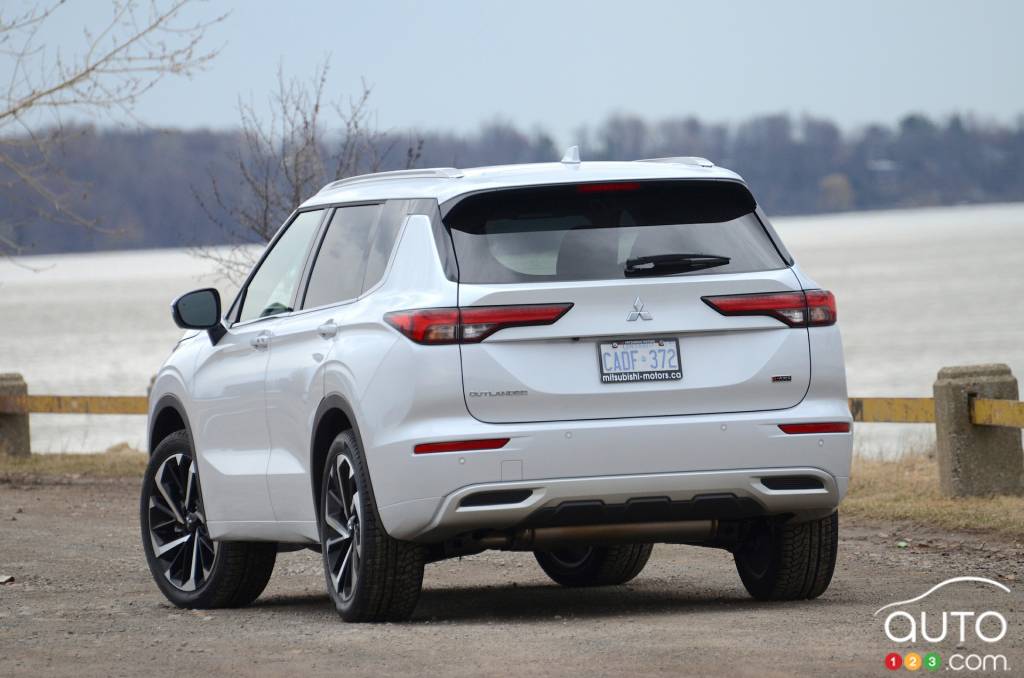 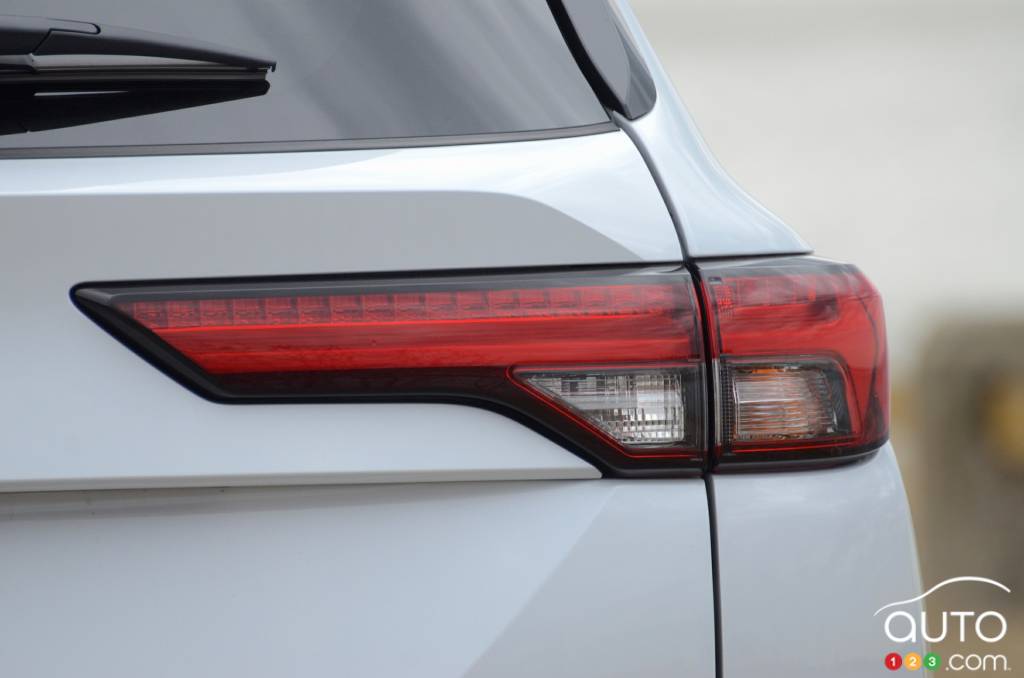 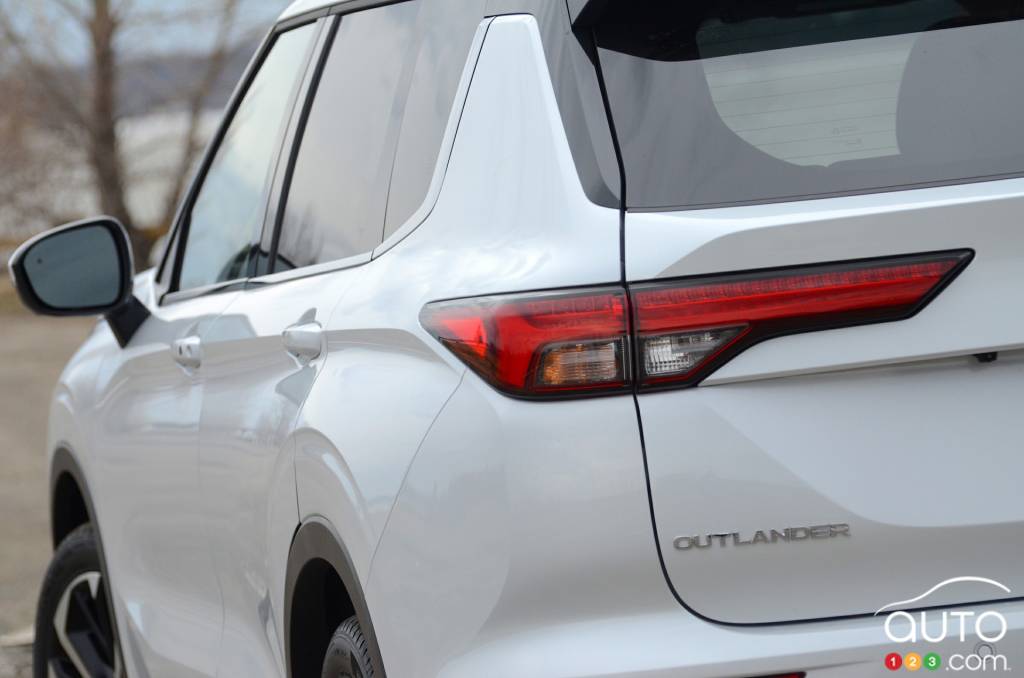