The previous Outlander model, sold from 2014 to 2020, wasn't, let’s be honest, very pretty. Globally, the compact SUV struggled perennially to keep its head above water against aggressive players in a market segment dominated by superstars like the Toyota RAV4, Honda CR-V, Mazda CX-5 and Nissan Rogue.

In Canada, however, the model captured a solid share of the market - led by its plug-in hybrid variant. But there too, it has faced an increasing number of modern, aggressive rivals.

The alliance with Nissan-Renault has given Mitsubishi a new lease on life, which has allowed it to revise its Outlander for the better. Now, the only question that remains in mind is: has it improved enough to get closer to those top four?

First things first: this fourth-generation 2022 Outlander shares several important components with the Nissan Rogue, one of the best-selling vehicles in its group.

Its styling, however, is distinctive. It's easily recognizable with its prominent front fascia, 20-inch wheels, widened fenders and established proportions. The result is striking, whether you like it or not, but Mitsubishi at least deserves credit for having attempted a rather striking styling exercise. 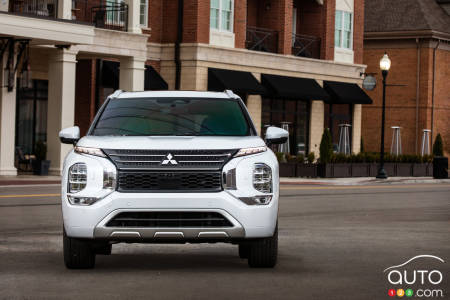 Under the hood, a newly developed 2.5L 4-cylinder engine and an improved electronically controlled S-AWC (Super All-Wheel Control) 4WD system, as well as a new drive mode selector, all contribute to the vehicle's increased safety bonafides and improved driving dynamics.

The cabin space offers a sense of spaciousness, and the GT Premium version we tested delivers a nicely premium interior environment, on the whole.

This sense of space is not accidental: the new Outlander is taller than the previous model, with a wheelbase longer by 35.5 mm and 51 mm more width to play with. This increases legroom in the second row and gave Mitsubishi’s designers the ability to place a third row in back. That makes seating for seven in this new Outlander.

The model is available in seven models: ES, SE, LE Premium, LE, SEL, GT and GT Premium. It's this last version that we had the opportunity to drive for a week. 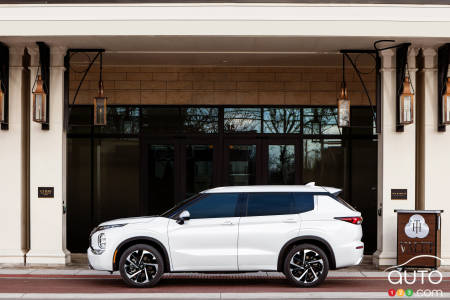 Powertrain
One of the major elements the Outlander shares with the new Nissan Rogue is its platform. The 2.5L 4-cylinder engine fitted onto it develops 181 hp and 181 lb-ft of torque, and is mated to an 8-speed mode CVT with Sport mode. We found it well suited for everyday use - as long as you don't get angry with the right pedal. Some things never change...

All versions are equipped with an electronically controlled 4WD system that distributes torque to the front and rear. It features Mitsubishi's proven S-AWC vehicle dynamics control system.

Active control provides distributed power control between the front and rear wheels. Sensors detect steering angle, drive torque, brake pressure, wheel speed and other factors to continuously and correctly identify driver commands and vehicle conditions. During cornering, Active Control also optimizes braking force between the front and rear, right and left wheels to improve tire traction on any surface. This is where the experience and excellence of Mitsubishi's gearing comes into play.

Another strong point of Mitsubishi is its 10-year or 160,000 km powertrain warranty, 5-year or 100,000 km full vehicle warranty and 5-year unlimited mileage roadside assistance, offered on all models. 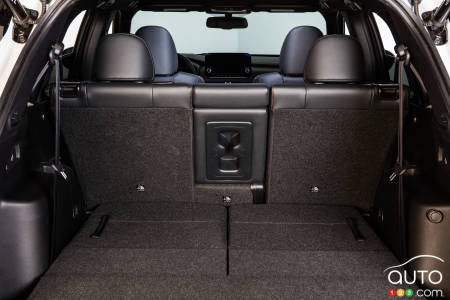 Inside
The Outlander’s interior is very different from that of the previous generation model, for instance it now features soft-leather seats to go with the hard plastics inside.

Our GT Premium trim came with premium leather seats and leatherette padded door inserts. All upholstery is stitched to project a premium feel.

The front seats feature a two-layer urethane construction to ensure seat comfort and to reduce fatigue during long trips. They have a nice shape in the front with side bolsters to keep you in place, as well as a wide range of adjustments and available power lumbar support.

The second-row rear seats (split 40/20/40) are also comfortable and recline evenly. Unfortunately, the third-row seats are very narrow and only suitable for children. 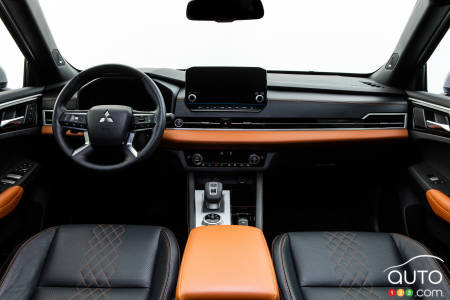 The technology
In our GT Premium version, the 12.3-inch all-digital driver display features the first TFT screen that displays a variety of items on a large screen. The screen also features a customization function that allows various information to be combined and displayed as per the user’s wishes. The navigation information on this screen can be customized.

For the 9-inch centre screen, the display is very similar to what Nissan offers. The quality of the display is very good and navigation between the various menus is easy and intuitive. Various functions, such as navigation and audio output, can be selected easily by touching the start menu icon displayed at the bottom of the screen at all times. Android Auto and Apple CarPlay integration is also present on all versions. Unlike the Nissan Rogue, which only offers wireless connectivity in the most expensive version, the Outlander offers this feature starting with the LE version.

Safety
In a nutshell, you’ll here all the safety features that are standard on most competing vehicles. In addition to those, there are a host of advanced driving aids. The blind spot and surround view camera is great for viewing other cars or objects you might otherwise miss.

We liked Mitsubishi's "Mi-Pilot" assistance. This system combines adaptive cruise control with lane centering to take control of the vehicle and help make highway driving less tiring, which help make a notable difference during the 235 km we drove from Montreal to Mont-Laurier in the Laurentian region of Quebec. The system handled highway traffic very well, of course, but also impressed us when traffic was heading two ways. We were a little worried at first, not knowing how it would handle oncoming traffic, but at no time did the system waver or seem to show any hesitation. 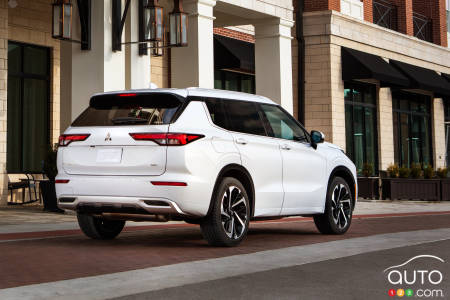 Overall, the new Outlander is very easy to drive and you eat up the miles without any problems. The steering is smooth and the suspension coolly absorbs road imperfections. Note that the wheels on our Outlander were 20 inches in diameter with low-profile tires and despite that, we felt like we were in a vehicle with an air suspension because the comfort level was so good.

During our test drive and after 1,050 km, the 2.5L engine, while no performance beast, did the job. The only downside was, you guessed it, the CVT, which got on our nerves a few times. You just can’t accelerate brusquely with this vehicle without your eardrums and your nerve-endings paying the price.

As for fuel consumption, we averaged 8.4L/100 km, which is slightly lower than the Japanese manufacturer's estimate of 8.9L/100 km.

Frankly, the driving experience of the new Outlander is very similar to that of the last-generation Nissan Rogue. Which is good news, considering that the Rogue took home our Auto123 award in the Compact SUV category earlier this year. 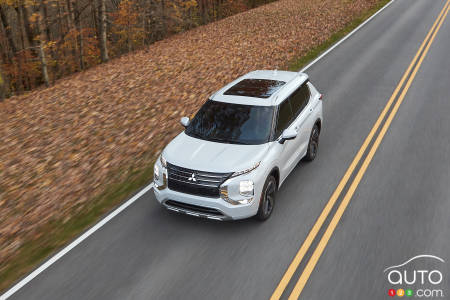 Photo: Mitsubishi
2022 Mitsubishi Outlander, from above

Conclusion
If you're in the market for a family crossover, there's a lot of choice out there, and the competition has only gotten tougher. The Outlander faces a long list of rivals in a growing segment, including the Toyota RAV4, Kia Sportage, Ford Escape, Nissan Rogue, Chevrolet Equinox, Hyundai Tucson, GMC Terrain and Subaru Forester.

In Japanese, the product concept is called "I-fu-do-do" which means authentic and majestic. In this respect, the new Outlander has certainly made great progress.

Next to the CVT, the only other hiccup really involves the price of this Mitsubishi. The fully-equipped Outlander is costed at $44,340, compared to $43,273 for the equivalent Rogue. Even in entry-level trim, the Outlander is more expensive than the Rogue. We're talking about $34,460 for the former versus $31,273 for the latter.

But to end the comparison there would be unfair. Rather than seeing the Outlander as a competitor to the Rogue, consider it as being in a sub-class apart, a compact SUV with three rows of seating. Along with the Volkswagen Tiguan, the Outlander is the only one to offer a third row and enough room in the trunk to fit a few travel bags, and it's much more fun to drive than its German competitor. Seen from this angle, the new Outlander is a serious option. 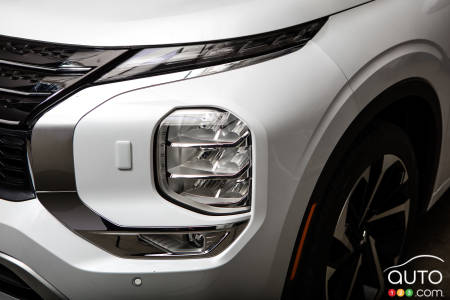 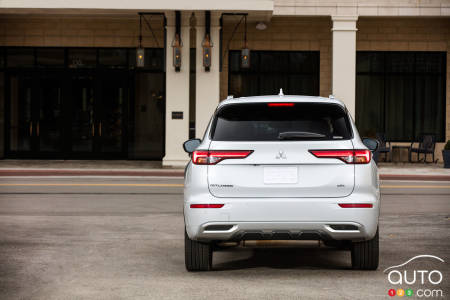