Earlier this summer, I was able to test the Acura NSX on a closed (and very twisty) circuit near Toronto. The Japanese supercar impressed me with its handling, but also its approachability, the exotic powerhouse being as easy to drive as a Honda Civic. Which is actually the case with several exotics nowadays. This explains in part why exotic car manufacturers are so successful with the well-heeled crowd. After all, being rich doesn’t automatically bestow race-car driving skills.

The only problem with my closed-circuit session was that this first experience behind the wheel of an NSX was limited to the development track of the MoSport complex in Bowmanville, Ontario. But then Acura Canada piqued my interest with an offer to let me take the car onto public roads for a more conventional test in the Montreal area.

And since I’d already listed the qualities of the car when in a very controlled environment, I decided to resolve a conundrum – or to try to, anyways:  Why has this head-turner not been more of a sales success since its reintroduction in 2017?

On top of that, I have to add that the new Chevrolet Corvette C8 unveiled previously this summer will definitely hurt the supercar from Japan, though to be fair the NSX was always seen by Acura to be more a flagship to attract consumers into showrooms than necessarily a profit-maker.

It’s a 2018, not a 2019!
I should mention that the car provided by Acura was a 2018 model year – the tipoff being the chrome strip at the front of the vehicle. The 2019 NSX comes with a body-coloured strip instead of the chrome. Not that that matters all that much, because the differences between the two model-years are very slim.

So here’s why the NSX isn’t a more common sight on Canadian roads, in my opinion:

The cockpit isn’t exotic enough
In this very crowded exotic segment, every detail counts and when such a beautiful-looking car comes with a dashboard on a par with any other Acura sedan of the group, it leaves a bitter aftertaste. The quality of the materials is not at issue here, and the same goes for ergonomics, but it lacks the spark that other exotics have. With the NSX, Acura should think outside the box and take a few risks. It needs to be more exotic inside!

An infotainment system in need of a refresh
Unfortunately, the Acura NSX comes with an outdated infotainment system. Namely, the graphics are underwhelming when compared with what’s available on the market today. In this age of connectivity, the touchscreen should impress as much as the car's capabilities, and yet, it’s not the case here. Manufacturers are constantly saying it: technology sells cars.

The seats aren’t enveloping enough
I also noticed this during my experience on the track: the bucket seats don’t offer enough support in the curves, especially at high speed. Obviously, this is not as important on an everyday basis, especially in a traffic jam where the incredible handling of the NSX is irrelevant at 5 km/h! But, when a beautiful winding country road presents itself, the two sport seats deserve a little more padding. On the other hand, the decision of the brand's designers to go for these bucket seats does make some sense; let's just say it's easier to get in and out of the car.

You call this a trunk?
The NSX is not the most "functional" exotic on the market. Now, I grant you that such a special car doesn’t have to be practical. The trunk behind the mid-engine bay is not very big and doesn’t even offer a flat floor. Although, I took it to the grocery store (because of course) and I was able to stuff four or five normal-sized bags in there, so it’s not that bad after all. 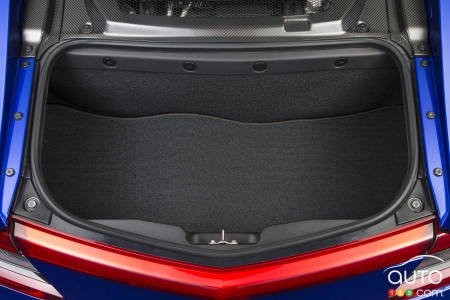 The “Quiet” mode
By the way, did you know that the NSX was a hybrid? On top of the twin-turbo V6, the Japanese supercar can rely on three additional electric motors, two of which are bolted to the front axle. In other words, the car can run in strictly electric mode, but you have to be gentle. Too much pressure on the right pedal and the V6 is back at it.

Also, the energy stored (and gained from braking) in the battery pack fades very quickly, according to the instrumentation gauge. In short, the "Quiet" mode applies very rarely in the city. On the other hand, for traffic purposes, this driving mode is perfect to save a few pennies at the pump. For every other occasion, the sportier drive modes are the way to go as they’re better suited to the sharpness of the car.

Exhaust system: not inspiring enough
The purpose of the earlier driving session at MoSport in Ontario was to illustrate how agile a car the NSX is when it's pushed closer to its limits. In Track mode, the sound of the engine fairly decent, especially during acceleration, but when compare with other cars in that segment, the NSX is pretty bland in this regard.

As one of my colleagues pointed out, the after-market specialty equipment industry is already offering solutions to unleash the symphony this wonderful V6 is capable of. The problem I have with this $240,000 car is that if you’re going to pay this kind of money, you expect to wake up the entire neighborhood when you head out in the morning!

The last word
The very limited number of the Acura NSX on our roads can be explained a number of way, including those I just covered. But we should definitely not forget the very fierce competition it has to deal with in this niche segment. Even at this price, there’s no shortage of choice and Acura also has to deal with the “not-as-prestigious” image issue when compared with the likes of Porsche or Aston Martin, for example.

Despite all this, I still believe that the NSX deserves a spot in the sun next to the best exotics currently on the market. The hybrid powertrain is not a common feature in this segment, and that’s one area in which I tip my hat to the model’s engineers. This is a very complex drivetrain, and it performs well.

I also have to add that this most expensive Acura on the market is very easy to live with on a daily basis, and it could even be used all year long (because of its all-wheel drive configuration), even if I don’t recommend it because of all the salt on roads in many regions of the country in the winter. As for its pure performance potential, it’s up there with the best of the best, especially for a car that averages of 12L/100 km ... on the road, not on a track of course!

Speculation is that Acura might be looking to boost the popularity of its NSX supercar with the addition of a Type R variant. For the moment the company is c...

A Type S for Every Acura Model?

We’ve recently been introduced to the next Acura TLX model and its Type S performance variant. It appears that more Acuras carrying the Type S designation ar...