Guanacaste, Costa Rica – Auto123 had its arm twisted to head down to beautiful Costa Rica at the invitation of Lexus for a special media event, held to mark the 30 years of existence of Toyota’s luxury marque. The brand set up shop officially in 1989, though only after the project gestated for a number of years within the walls of Toyota HQ.

For this special anniversary event, Lexus even brought with a few models that have marked its history, including this magnificent ivory-coloured 1990 LS 400. The big sedan, the job of which was to take on the likes of the Mercedes-Benz S-Class, BMW 7 Series and Jaguar XJ, was actually the first vehicle to be created entirely by Lexus (the ES 250 sedan also available at the dawn of the 90s was in fact essentially a Toyota Camry in a tux.

Also along for the ride for this event marking the three full decades of the brand where the latest new Lexus models, including some of the 2020 vintage. We got the smart idea to do a comparison of the very first LS and the new 2019 edition.

First there was the LS 400
If you’re thinking this early LS model looks to be in pretty darn good shape, you’re right. This 1990 LS 400 has been part of the automaker’s own collection for the past three decades. It odometer sits at only 27,000 miles (43,000 km) and change, and it clearly has been meticulously maintained.

Proper upkeep is one thing, but there are other elements that are just indicative of the quality of a model and of a brand, for instance the shine of the paint job or the state of the chrome bands framing the windows. In this 1990 Lexus, all of these are superb. Even the black front grille looks brand-new.

The same applies inside the car, where the beige leather upholstery shows no signs of advanced wear. The leather is soft and the carpets look like they were installed a month ago. In fact everything is original in the car, as the folks at Lexus took no small pleasure in reminding us.

Open up the hood and you’re brought back to the late 80s; Lexus’ weapon for going into battle with segment rivals was a 4.0L naturally aspirated V8 generating 250 hp. There too, everything was impeccable, as if we’d been transported back in time.

To properly grasp the experience of driving a Lexus in the company’s early years, best to climb in this grand dame of a sedan brought over from Japan to conquer the North American market. Once settled in the plush seat, I found myself face to face with a streamlined dashboard, with most of the buttons clustered in its centre. No trace of a nav screen of buttons to adjust the level of the heating for the seat. This is old-school luxury! Which means, cassette deck, big buttons for the audio system, digital clock and commands for the A/C… and that’s it!

Between the front seats, the central console offers storage space under the leather-covered armrest, and the big gear knob of the automatic transmission is the only other element worthy of note. Oh, I’m forgetting the ashtray of course. There are two more in the back as well, integrated in the armrests on the doors. As for the seating in back, the space it offers is equivalent of that of a modern-day midsize sedan - at most. But the seating there is a pleasant as it is up front.

To start the car, you need the old-school physical key of course. No fobs for this baby. Despite its age, the 1990 LS 400 delivers a very quiet ride; one of Lexus’ big selling points for the model back in the day was that it was the quietest sedan on the market. You can barely hear the V8 growl when in “normal” driving situations. When I pushed the pedal down more aggressively, I was able to comfortably take it as far up as 140 km/h in a purely scientific quest to see how the car fares after 30 years of existence. True to its reputation, the car continued to inspire confidence. Like a train, I thought…

Of course, that 250-hp output reminds you you’re dealing with a car from another era. Accelerations are not a biting as those of a similar-type car today. Then again, the prime focus of the LS 400 back in the day was not to drag race but to transport its occupants in the greatest comfort possible. In that respect, it’s as impressive as ever. What’s more, for those sentimentalists who put a lot of value in reliability, the first-generation LS 400 should be on your shortlist of all-time greats! 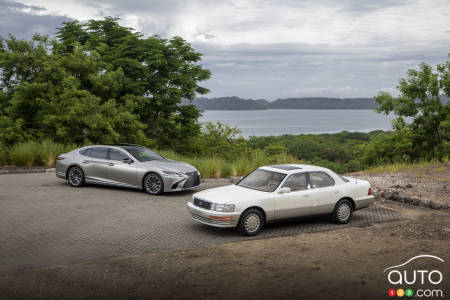 Skip to today… and the LS 500
Sitting next to its oldest ancestor, the new 2019 Lexus LS 500 looks like nothing so much as a spaceship from the future that’s alit beside a 70s-era commercial plane. While the old LS 400’s contours are classic sedan all the way, the LS 500 is all aerodynamics and led by a fascia you’d expect to see on the front of a futuristic concept car, what with the hourglass-shaped front grille. It’s also much roomier inside, and in fact it’s worth pointing out that the LS is now offered only in extended-wheelbase version.

That fact is quickly apparent when you look inside. The back row is basically a pair of business-class seats, with tons of legroom and a central touchscreen for all your multimedia needs and even small mirrors on the ceiling for a quick face check. In front, the organic shaping of the dashboard is really impressive, as is the large 12.3-inch infotainment screen – to be controlled using that infamous Lexus touchpad down by the right hand of the driver, still as knotty to use as ever.

The new LS has fully retained the comfort characteristics of its ancestor, however. The first-row seats envelop the occupants more than they did in 1990, but they’re just a plush. What’s more, occupants of both rows get heated AND ventilated seats, and can submit to a soothing massage to boot.

Instead of the naturally aspirated V8, the LS 500 actually lost two cylinders later, though of course the current V6 twin-turbo delivers a meaty 416 hp. In lieu of the old 4-speed automatic, the LS 500 makes use of a 10-speed unit and offers the possibility of changing them manually. Above the dashboard, the cylinder on the right side of the steering wheel, allows the driver to choose the drive mode they want. Do I even need to add that the most engaging one is the Sport+ mode? Engage it and the LS stiffens up while the engine gets more expressive in response to your commands.

The LS 500 is actually a pretty heavy car, but that doesn’t prevent it using that big powertrain to produce very quick accelerations. The suspension continues to prioritize comfort, which means there’s some roll when cornering too aggressively. Steering is notably crisper than in the 1990 LS 400, but at the same it feels more disconnected from the road.

While back in 1990 there were much more responsive cars than the Lexus LS 400, the luxury sedan from the last century still can lord it over its contemporary descendant, simply because the drive it offers is far less antiseptic. I say this while fully acknowledging that the 2019 Lexus LS 500 is superior in all respects to the older model, the one that paved the way forward for the brand back in the 90s.

Truth is the industry as a whole has made immense progress in the past three decades, and that includes the good ol’ Lexus LS. The new edition is refined and advanced – it’s also available as a hybrid, by the way – but it owes its existence to the pioneering big premium sedan of old.