America is big and so are its vehicles, traditionally.  It has taken time for motorists there to accept that small cars can offer the same level of luxury and technology as larger vehicles. The new Mercedes A-Class is a prime example of this philosophy, while the 2 Series demonstrates that performance also can be potent even in pocket format.

BMW offers the 2 Series Coupe versions, among them the 230i and M240i, with RWD and AWD. In the cabriolet version, the 230i is equipped with the 4WD system as standard, while the M240i is equipped with RWD or AWD. For the purposes of our comparison we are analyzing the two models with the base 2.0L turbo engine. 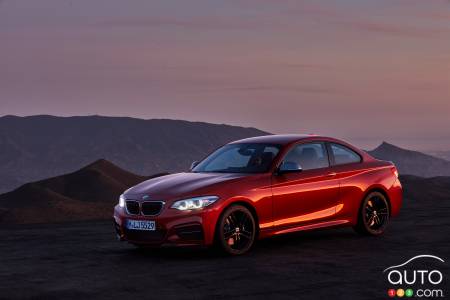 Flowing lines
BMW is known for its fluid and balanced lines. The 2 Series is reminiscent in many ways of the first generation of 3 Series, and let’s be honest, it’s physically more attractive than the A-Class. Under the bonnet, the engine of the 230i is a 2.0L 4-cylinder turbo producing 248 hp and 258 lb-ft of torque. An 8-speed automatic transmission is standard, with the six-speed manual a free option in the 230i coupe.

It’s all about driving
BMW has been a skilled connoisseur of the art of driving for decades and the road abilities if its vehicles take on all their meaning in a small and agile format like this. The 2 Series excels in all aspects of driving: acceleration, steering precision, balance and braking. Few cars of this size offer such driving pleasure. Where the A-Class counts first and foremost on technology to attract those buyers ready to put dynamic driving on the back burner, the 2 Series uses driving exhilaration to get drivers to care less they don’t have the trendiest tech on board.

Conclusion
A small sport car for those who put driving at the top of their priorities, in which passion wins out over reason. 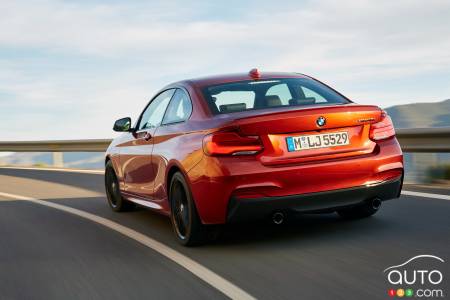 Until recently, manufacturers put all the technological knowledge they’d developed into their most expensive models. The irony of this approach is that the majority of S-Class or even E-Class owners have little technological inclination and make little use of their car's functionalities. Meanwhile young people who really live daily in tech mode often don’t have the means or the inclination to go for those top-end models. Mercedes-Benz seems to have understood this and made a concerted effort to bring the technology into an entry-level model.

New genre
New to our market, the A-Class has existed since 1997 in Europe. Closer to the small family wagon in its infancy, it was transformed in 2004 and again in 2012 and its styling has edged closer to that of a small car. It arrived in Canada first in the 5-door format and then as the sedan version. It is based on the chassis of the CLA and the GLA, with elements borrowed from the CLS.

In terms of proportions, you have a format comparable to that of a VW Golf. In case of impact, the hood is long enough to rise eight centimetres to cushion the shock and provide better protection for pedestrians. The overall contours of the base version are a little more discreet than the 2 Series. 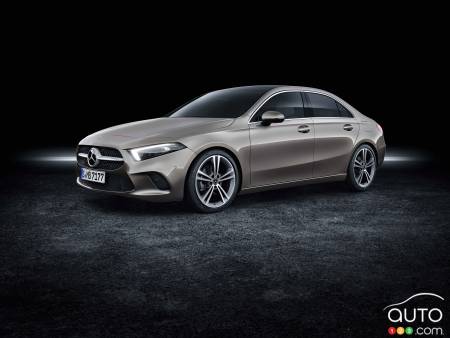 A concierge in the car
The obvious centre of attraction of this model is the new MBUX (Mercedes-Benz User Experience) infotainment system that Mercedes introduced first in the A-Class and then expanded to other models.

Far ahead of the competition’s equivalents, this interface incorporates an artificial intelligence system that allows the car to learn the driver’s habits. For example, if you listen to the same radio station every day, the car will take note and tune in to the station when you enter the car.

Like Google Home, you can also converse with the car. By starting your sentence with "Hey Mercedes", you have a voice assistant that can communicate in 37 languages. In the manner of Alexa, this assistant can perform a number of actions at the request of the driver. So, if you say "Hey Mercedes, what's the weather like in Montreal?”, you’ll get your answer. You can marry your Google Home and Mercedes system, and once you're done, you can request information about your car from your Google Home. 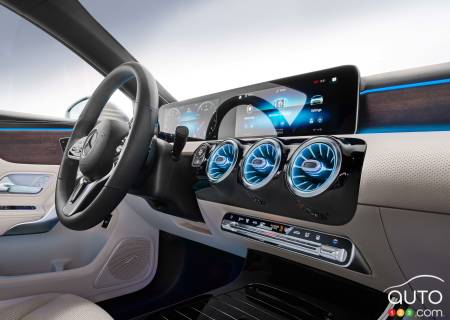 Another innovation: the all-digital dual-display screens in two formats (7 inches each in the base models and 10.25 in the high-end versions). These two flat screens can be used in various ways. The right screen is touch-sensitive and customizable. Also noteworthy is the extreme clarity of the screen, which surpasses what you get in the competition. Even in bright sunlight, the information is clearly legible. The company’s clear focus on including avant-garde features gives a unique atmosphere to this car.

Generally, the A-Class is dressed in sophisticated materials, and doesn’t feel like the poor cousin of its more-expensive stable mates.  You benefit from most of the technological gadgets found on other models in the family.

Familiar mechanics
The base A 250 uses a 2.0L turbo engine making 221 hp and 258 lb-ft of torque via a 7-speed automatic dual-clutch transmission. In the entry-level version, the model comes with two-wheel drive and optional 4Matic AWD system. The new A-Class comes standard with a regular steel suspension; the 250 version offers a 15 mm low-profile comfort-focused undercarriage, which uses special springs and dampers to add sporty performance. You have to choose the 35 AMG version for an adaptive suspension. 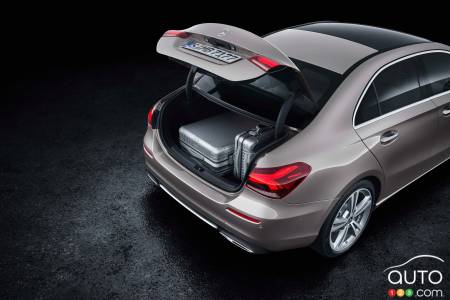 Pleasant for daily driving
The closest comparison when it comes to the driving experience of this car, is what you get from the VW GTI. As in, the suspension is firm without making things uncomfortable. Power and torque are virtually the same as the Golf GTI Golf, and in fact so is the interior space. The only downside is that the steering sensation is somewhat artificial. For its part, the braking is safe and quick. Sound insulation is very good, while the suspension filters the more difficult terrain with a certain ease.

This is a small car that’s easy to live with day in day out, its small format making it ideal for navigating roads small and large. The low driving position, the way the seats hold you in place and the rigidity of the body ensure excellent driving precision.

Conclusion
This is an innovative car, technically advanced and fun to drive, and which has all that today’s trend-conscious motorists want to have.

Even though the A-Class is fun to drive, the 2 Series has a clear advantage in this regard. It’s also available in a convertible configuration, while the A-Class is not.

The prize for technological innovation and sophistication goes to the A-Class; Mercedes- Benzhas been able to integrate a lot of the latest systems in a compact car. The A-Class also offers more space than the 2 Series, in which space for rear passengers is more cramped.

Both vehicles offer a 4-cylinder turbo engine with all-wheel-drive options, long option lists and comparable warranties. You also have the prestige of a German brand in both cases.

While the two vehicles reside in the same category, they don’t address the same customer. You’re more likely to choose the BMW for the feeling of happiness it gives you on the road, while you’ll opt for the A Class for its tech trendiness and greater roominess.