Hyundai and Mazda. Both are interesting cases; they’ve always been known for their compact sedan and hatchback offerings, but there’s a bit of an issue there. Simply put, those are popular vehicle types that are populated by perennial leaders – think Honda and Toyota – that are massive sellers, have a massive following and have enjoyed their spot at the top pretty much uncontested for man years.

Mazda and Hyundai – especially Mazda – don’t have quite the bandwidth those manufacturers do, and so they have to make their entries stand out that much more, whether through sharp looks (think Mazda) or generous feature offerings (think Hyundai).

So, what do the latest compact hatches from Mazda and Hyundai do to separate themselves from the crowd, and which one does the better job of it?

Well, the hot looks trend continues with this latest 3; it appears longer, lower and wider than previous (although it’s not actually wider), projecting the image of a hatchback with real sporting intentions. The flat gray colour of our tester may seem a little tame in photos, but seen in person it actually adds a layer of steampunk style that’s a perfect fit for a small hatchback.

You will pay for those looks in the form of some pretty big over-the-shoulder blind spots, however, so best be sure you set your mirrors properly.

Specifications of the 2019 Mazda3 Sport 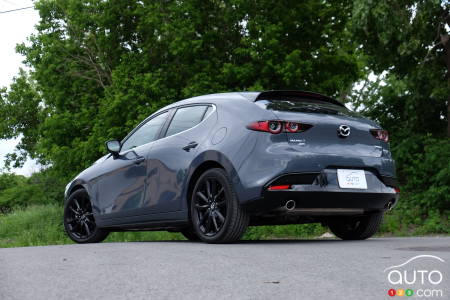 AWD
Yes, that’s right, the latest Mazda3 gets AWD, another feature typically reserved for the various luxury segments. Indeed, many used to think the Mazda CX-3 subcompact CUV was little more than a Mazda3 with AWD – which it kind of is – so it will be interesting to see how these two can co-exist in the same lineup. The configuration does cost $3,000 to add, however, and is not available at base. That’s no surprise, really, and the fact that you can get AWD on two different trims – GS and GT, both as a hatch or sedan – makes for a very interesting proposition; in Canada, AWD is king and its existence here definitely gives the Mazda3 a leg up over the Elantra GT. The only other model in the segment to get the tech, meanwhile, is the Subaru Impreza.

More than just an exterior overhaul
Inside, it’s a whole new world. Gone is the somewhat awkward-looking infotainment screen of old, replaced by a much more streamlined affair that’s larger and more integrated with the dash. The infotainment control wheel has also been changed, as have the Bose speakers whose metal-look grilles look like they belong in a higher price bracket than this.

The screen itself displays a whole new graphic set, though I’m not quite as taken by its classy yet somewhat monotone looks. Seems that Mazda can’t quite tick all the boxes when it comes to infotainment. Apple CarPlay and Android Auto compatibility comes as standard for 2019. It worked mostly smoothly during our test, but as is often the case, Google Play Music caused all sorts of problems. Software issues? Maybe, but it works fine in some cars so... 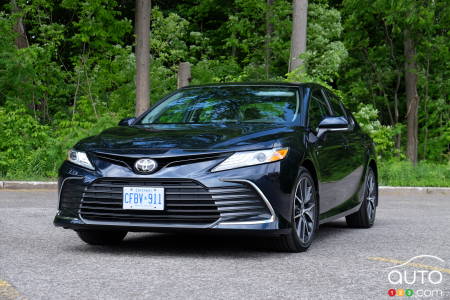 On the road
Power on our top GT trim comes from the same 2.5L naturally-aspirated 4-cylinder we’ve seen previous, good for 186 hp and 186 lb-ft of torque; those figures that are down on the Elantra GT N-Line we used for this comparo, and they’re also eclipsed by the VW Golf GTI and Honda Civic Si.

The only way you can have AWD, meanwhile, is with a six-speed automatic transmission. That’s a bit of a shame as Mazda typically makes some very good manual boxes, but for the first time in a 3 you get paddle shifters with your auto, which I made plenty of use of during my test. The transmission itself is not a dual-clutch example so it’s not the quickest shifter out there, but doing the shifting yourself does make up for this a little.

So while the powertrain is more of an evolution that a revolution, the ride quality is a big step in the right direction. Mostly absent are the creaks, rattles and shudders often found in a compact vehicle, replaced here by a ride that is predictable, quiet and altogether atypical in this segment. The new torsion beam rear suspension deserves some thanks for all of this, as do other subtle tweaks made to the suspension for 2019.

I am a little curious as to why I routinely heard what sounded like some chassis flex at the rear, however. Could be that it was my tester specifically, but it was enough that I found myself making note of it on numerous occasions.

The extra differential does, however, add a little more weight to the Mazda3 and while it’s nice that power can be sent to whichever axle needs it the most – up to 50 per cent front/rear – I did find the steering to be not quite as responsive as past FWD Mazda3s have been. Perhaps it’s the weight, perhaps it has to do with Mazda wanting to make for a more relaxed drive experience overall, but I’d like to see how an FWD model would feel in comparison.

Turbo power is the order of the day with the all-new N-Line model, which marks the first time we’ve seen anything of the sort in North America. Power is rated at 201 hp and 195 lb-ft of torque, channeled to the front wheels through a 7-speed dual-clutch transmission in our tester ($30,699). The N Line comes with a 6-speed manual as standard ($27,199).

Our review of the 2019 Hyundai Elantra GT N-Line

N-Line all mine
While the Elantra’s Veloster N sibling gets a complete overhaul from chassis on up, “N-Line” designation doesn’t do quite as much for the Elantra. It does provide special suspension tuning as well as re-tuned steering and stiffer engine mounts. There’s window dressing too, in the form of special 18-inch wheels, front and rear bumpers and a few interior nips and tucks (namely red seatbelts and matching stitching).

Infotainment
Mazda’s system may be new, but the version in the Elantra is brighter, has larger on-screen graphics and basically replaces the Mazda’s black-tie affair with a pair of parachute pants and a sequined blazer. It also gets Apple CarPlay and Android Auto support as standard and wouldn’t you know it: Google Play Music worked just fine.

On the road
All those tweaks aren’t just marketing fodder, either. The steering rack is a responsive one – more so, it must be said, than what’s offered on the Mazda3 – and the new chassis tuning makes for some enthusiastic dancing through repetitive turns and the like. While there’s no limited-slip differential to speak of, the steering and chassis more than makes up for that.

The extra power the GT has over the Mazda3 can mainly be felt when the car is un-stressed. Passes at speed can be undertaken with relative ease, but getting up and going from stop doesn’t feel quite as zippy, as you have to deal with a little bit of turbo lag. The issue is magnified if the road you’re on happens to be a hilly one, as the engine does tend to feel quite stressed when climbing, not matter how much you flip the left-side paddle to drop a cog (or two). At least it sounds good while doing so; the Abarth 500 may be the leader when it comes to small cars with big exhaust notes, but the GT N-Line makes a fine attempt at the crown, all burbly and authoritative-sounding.

It’s the better looker of the two for sure – may be the best-looking hatch, period, and that includes Europe-only Alfas and Fiats – and its on-road manners are so buttoned down and effective that it has managed to bring itself into the luxury conversation. Which it has to do especially in top spec GT AWD form ($33,220), because Mazda doesn’t have a luxury branch to turn to for a more commanding ride or interior features. Plus, no one can deny how important AWD is to have in Canada, even in compact hatch form.

It’s the more rewarding drive of the two, thanks – surprisingly – to that steering rack, which is something I thought the Mazda would have all sewn up before I set out on this test. The Elantra also provides more interior room than does the Mazda especially in the back seat, which is a tough sell for even slightly taller passengers in the Mazda. That also means a fitting a child’s seat in the 3 is an added challenge.

While the Elantra’s infotainment system may look nicer, both systems offer similar features and are easy to navigate.

When all is said and done, what we have here are two vehicles in the same segment that could be considered top of their class, just for different reasons. With the Mazda, it’s all about those spectacular looks and classy interior, while the Elantra is the sportier of the two and pales in comparison only with the most performance-oriented entrants in the segment such as the VW Golf GTI or Honda Civic Si. Both are similarly priced, but one gives you the power to go with the pricing, the other, the chassis to go with the pricing.

It’s a tough call, but over the long term, I think I’d be happier with the Mazda. It’s the car that I imagine turning my head to look at as I walk away from it throughout my ownership period, and that fantastic ride is something that I could appreciate every day, as opposed to the Elantra’s performance, which I may only be appreciate while tackling my favorite country road.

Doesn’t perform quite as the numbers suggest it should

The next-gen 2019 Mazda3, presented today at the Los Angeles Auto Show, will be available with a four-wheel-drive system. The redesigned and rejuvenated comp...