Since it debuted back in 2004, The Mazda3 has been a strong favourite of motorists in Canada. Its selling points have long been, in no particular order: a pretty face, good value and driving pleasure that rises above the norm.

The model even survived some issues with rust that bedeviled it for a certain number of years. More specifically, the first-generation Mazda3s had a tendency to start falling apart at a rate normally associated with the Yugos and Ladas in our climatically challenging market in the early 1980s.

Last year saw the introduction of the model’s fourth generation, and with it the expectation the strong progress we’ve seen with each new edition would continue.

The big question now involves the introduction of all-wheel drive. Is it a match made in heaven? We’d like to say yes and end it there, but the fact is that while AWD marks a clear progression for the newest 3, all is not exclusively rosy as a result of the latest overhaul.

We drove the AWD Mazda3 hatchback for three weeks, and here’s what we discerned in terms of steps forward… and backward. 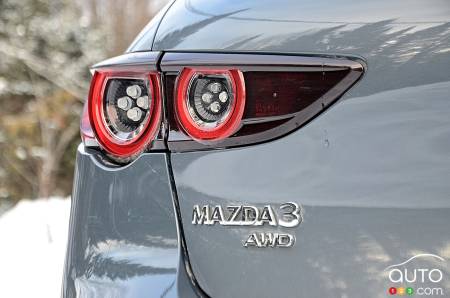 The design
The Mazda3 is, once again, offered in two basic configurations: sedan and hatchback. In the first case, I salute its striking design and sublime lines. Thumbs up. When it comes to the five-door, however, I have some reservations – and I’m not alone. After a year on the market, there are still two camps when it comes to the design of that version’s rear end.

Personally I dislike it, for two reasons. The first is esthetic, which I know is subjective but I can’t help but form an opinion from looking at it. The second, however, concerns the impact the current design has on visibility from within. And that is inarguably the more serious issue, in fact I’d go so far as to call it unacceptable. More on that in a bit.

The result is that consumers who share my thoughts on the new Mazda3 may well go looking elsewhere for a hatchback compact car. I have been told exactly that by more than one of them. 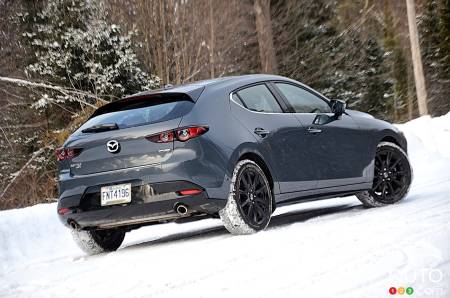 The interior
With the arrival of the new generation last year, it wasn’t just the outside that got reworked. When it comes to the interior environment, the presentation is a success. While there’s little you would call exceptional, there are no false notes either. The instruments are still traditional in appearance, but they’re pleasing enough even when partially digitalized. The head-up display included in our tester added a touch of high-end class, in contrast with the cheapish pop-up screen Mazda formerly used.

Kudos as well for the nearly-full integration of the multimedia screen into the dashboard, as Mazda avoided the temptation to take the easy design route and slap a floating-type screen on the top of the central console. There are altogether too many models currently on the market that deploy that lazy design technique.

The seats, meanwhile, are well-sculpted and sufficiently soft to ensure good comfort even on longer trips. No complaints either regarding the audio system, clear and bold in its sound and pleasingly simple to use. 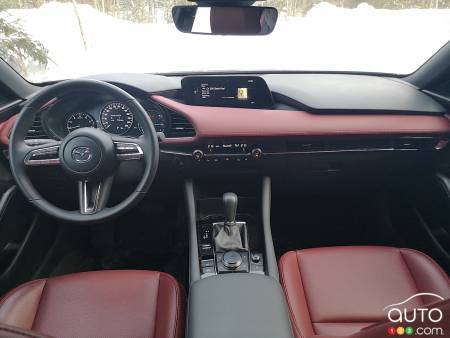 After the bouquets, some brickbats
No way around it: the atrocious visibility out the back of the Mazda3 hatchback is impossible to ignore. In my time in the car, there were numerous times that when changing lanes I doubted whether I had clear passage, this despite looking carefully. This was seriously annoying, because it’s a basic rule of modern-day driving that you should never simply trust in your car’s blind spot monitor. Nothing, still, beats getting a good look for yourself.

At the very least, if you’re going to be driving in a cocoon like this, you should be given a system like Honda’s or Hyundai’s. With those, using the turn signal produces an image showing the entire side of the vehicle, making for a much safer lane change. Mazda will need to address this issue, sooner rather than later.

Here was another winter-specific issue: when backing up, in cases where the backup camera is rendered useless by an accumulation of slush on it, I very nearly backed straight into another vehicle that I absolutely could not see due to the design of the car’s back end. Unacceptable. 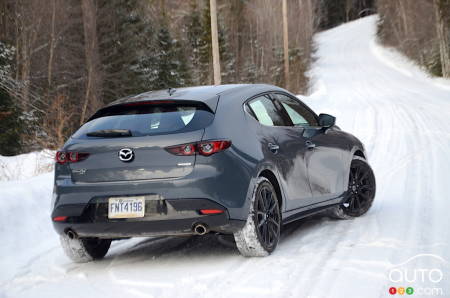 Less seriously, I also felt some irritation with Mazda’s new multimedia system. The old system had become outdated and many were waiting a new generation with impatience. Sure enough, there’s a ton of data available and the functions are cutting-edge, the interface is terrible and it takes forever to make one’s way around from one menu to another.

Remember that I had three weeks to acclimatize myself with it. I found it impossible to switch from one radio station to another in one touch. It took four operations to move up or down one satellite radio station, for example. 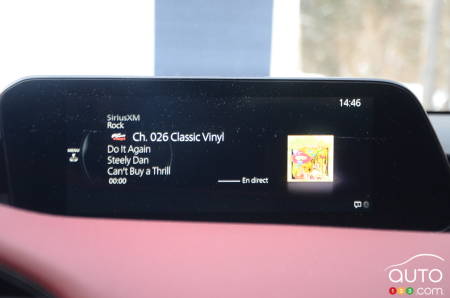 Redemption
While the design (of the hatchback) and the new multimedia system did their part in making my blood boil, the Mazda3 pretty darn nearly redeemed itself in one very important area: its on-road behaviour.

Here the company has clearly progressed with this new generation compared to the last, and quite simply we’re reintroduced here to the essence of driving. On the road, the new Mazda3 is solid from A to Z. The 2.5L 4-cylinder engine doesn’t produce jaw-dropping starts off the line, but its 186 hp and 186 lb-ft of torque do ensure lively and safe driving. The 6-speed automatic transmission in our tester made itself forgotten over the some 1,100 km we covered – which is a compliment. I’ve said it before: A good transmission is one you don’t notice.

The steering is perfectly weighted, transmitting just enough feedback to produce a good connection with the road beneath. Truly, the Mazda 3 stands above the rest in its class when it comes to delivering driving pleasure. 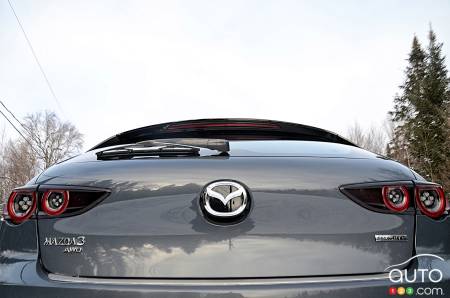 And, of course, there’s the new i-Activ all-wheel-drive system. In brief, it detects loos of road grip and reacts by sending torque where it’s needed. Frankly it works so quickly that you’re largely unaware of anything happening behind the wheel. During my test drive we were hit with a fairly strong winter storm and it was the perfect opportunity to put the system to the test and confirm its effectiveness.

For the rest
Otherwise, la Mazda3 offers everything buyers of a compact car would want. The question is to study the product offering and choose which version is best for you.

We could do without the electronic braking with auto hold, however. It activates constantly and you’re obliged to deactivate it every time you want to get moving again. This type of helicopter parenting can and does get seriously annoying.

In the GS version you get heated side mirrors, as well as the more-powerful 2,5L engine, heated steering wheel and a number of added safety and drive-assist features. All-wheel drive becomes available here as an option. This version lists at around $27,000. 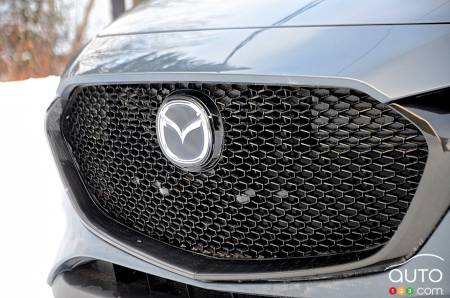 Step up to the GT version and you spoil yourself with 18-inch wheels (instead of 16), paddle shifters, and that premium Bose audio system I lauded earlier. To really go whole hog, add the Premium package that beings with it navigation, a memory function for the driver’s sesat, leather seating and integrated garage-door opener.

The choice is yours. 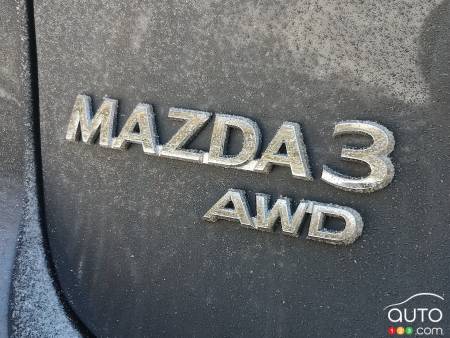 Conclusion
The Mazda3 has improved in several respects over the previous generation, but it also clearly suffers from a few flaws.

If I were buying it, I would probably lean to simplicity in terms of the trims, and you’ve probably guessed I would avoid the hatchback and go for the four-door.

It will be interesting to see how sales go in 2020. A second straight year of declining sales after a major refont could compel the automaker to make additional adjustments. 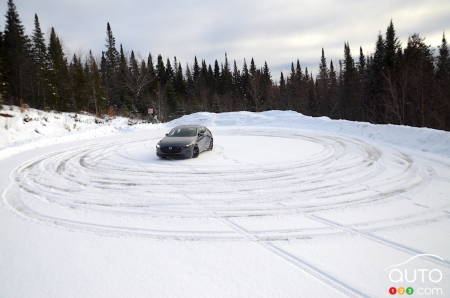 Mazda Canada has announced pricing and trim details for the Mazda3 for 2022. Actual changes are minor and mostly involve more standard equipment further down...