It wasn’t long ago that a comparison between two EVs would invariably involve a Nissan and a Chevrolet. Now, though, the EV world has entered the long-predicted explosive-growth phase. It’s no longer all about small hatchbacks or sedans; we have SUVs, crossovers, pickups… and these two.

Because yes, these two battery-electric vehicles (BEVs) are kind of hard to categorize. Is the Hyundai a small crossover? It’s roughly the size of a Tucson inside, but it doesn’t have a rear wiper and it sits lower, so does that take it out of the crossover category, and put it in the hatchback one?

What about the C40? Is it a crossover? A coupe? Neither? It shares its platform with the XC40 Recharge which is obviously a crossover but then, the C40’s got that strange roofline and no “X” in its name, so…

The BEV world, in other words, has evolved to where it includes vehicles we can’t even traditionally categorize. We decided to pit two of those against one another. This is a vehicle that, already, is full value. It’s selling well and would be doing more so if it weren’t for the ongoing supply issues the industry is dealing with. It has just won three World Car of the Year Awards and has pulled the neat trick of making it to the showroom floor looking almost exactly as it did in concept form.

You want edgy? We’ll give you edgy!
Believe it or not, the Hyundai Ioniq 5 does take some of its inspiration from an older Hyundai, but not the one you might think.

The Ioniq 5 actually takes a lot of its styling from the early 70s Pony concept, right down to the pixelated taillights and even the shape of the rear side window. You could say that even the concept’s colour has made its way here. Which is fine, though I would say that when it comes to colour choice, I wouldn’t say either one of these cars are all-star performers. Yes, the metallic-look off-blues, off-blacks and even off-greens that are available for these look slick in their own way, but only the C40 offers a truly bright colour, Fusion Red.

The Ioniq 5 makes up for it in other ways, though. The head- and taillights are ultra distinctive; they look like a cross between what you’d find in an old pixelated video game and the LED DRLs we commonly see today. And there’s more: the folds and creases on the doors and the rear fascia look like techy origami and even the spiral look given to the fenders work.

It doesn’t seem like it should work, but it does because the rest of the styling package is just so unique. Add the two-tone wheels and you have a winning proposition on the style front. 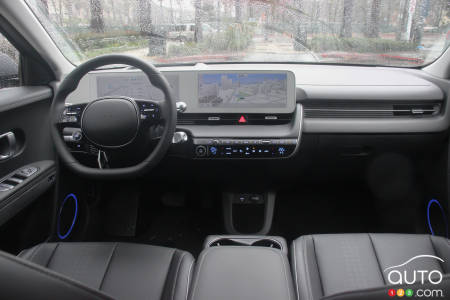 Clear your head
Inside, it’s all about keeping it airy. The interior is awash with broad, flat surfaces, the button bank for the infotainment and climate is a simple, low profile affair (but one that does keep traditional hard buttons and doesn’t have to rely solely on a touch interface), the dual 12-inch displays for your gauges and infotainment have a pleasing Apple-like feel to them and the centre console can be moved fore and aft for more room up front, and more accessible from the rear. You also won’t find a “Hyundai” badge anywhere inside – unless you know braille because those four dots on the steering wheel hub? Yep, those spell out “Hyundai”.

It's really spacious as well inside, which isn’t surprising if you know that the Ioniq 5, not huge when you look at it, actually has the longest wheelbase of any Hyundai, including the Palisade three-row SUV. The wheels are pushed far to the corners, giving plenty of interior space. So much, in fact, that you can actually fold the driver’s seat all the way back and deploy a footrest. This, of course, would bring new meaning to “cruising the boulevard” but obviously it’s meant to be used while stopped, perhaps while charging. 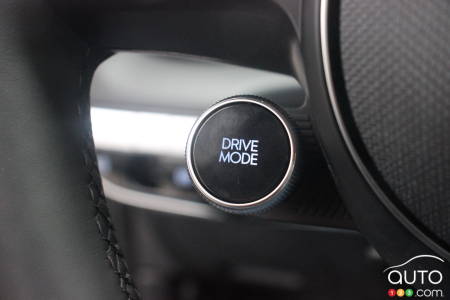 Power to the people
Having said that, you likely won’t have that long of a nap because the Ioniq 5 charges incredibly quickly, up to just 18 minutes from 10 per cent to 80 per cent in a scant 18 minutes when using a 350-kw charger. If you can find one of those, of course. In Canada, only Petro-Canada offers charging at those speeds and even that doesn’t always work as it tends to be weather-dependent. Still, though those are some potentially very impressive figures.

Of course when it comes to EVs, charge power is one thing, but these are cars and we still want to know how capable they are out on the road. So what about that more traditional power – horsepower?

That was my tester, and it’s definitely a fast mover, especially on tip-in. Your throttle is basically a switch and power is sent directly to the wheels, so hold on tight. Even though all that battery makes the Ioniq 5 heavy, that power figure helps negate that.

You aren’t going to get sky-high top speeds, but you can hit the highway in this Hyundai and be well taken care of. The rear-wheel drive bias, meanwhile, means a nice attitude through turns. But the real highlight here is the ride. Surprisingly luxurious, it does well to compliment the cabin’s airy environs. This is a car that feels bigger than it looks, drives more luxuriously than its badge perhaps suggests and is quicker than something with its body style – whatever you decide that is – is expected to be. 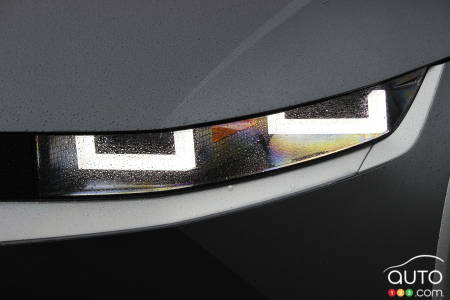