The lack of an “X” in this particular Volvo shouldn’t hide the fact that it shares nearly all of its underpinnings with the electrified version of the XC40 compact crossover, the XC40 Recharge. The C40 makes almost the same range, exactly the same power (402 hp) and even weighs pretty much the same.

So why does it exist?

Chop the top
Well, a wiseguy would say that it exists to deliver less rear headroom. Someone a little more styling-focused, however, would tell you that the C40’s more modern “four-door coupe” look is more befitting of something futuristic like an EV. Although this day and age, EVs are becoming less “in the future” and more “in the now”.

So yes, the C40 makes do with almost 450 mm less headroom than does the XC40 – and also has less cargo space – but the front of the cabin is roughly equal and if you can make do without the extra rear headroom, the C40 is a pretty jazzy-looking thing. The front fascia appears a little more low-profile than that its sibling, while the way they’ve managed to take Volvo’s trademark vertical taillights and make them work here is very cool. 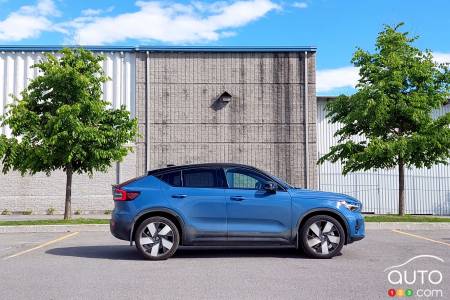 The wheels are also futuristic but even at 20 inches, they look a little small because the C40 is a crossover and gets the ride height that goes with that; there is thus a noticeable gap between the top of the wheels and the fender. It’s visible mostly from the side, but still.

Which is interesting because even though the Ioniq 5’s shape is somewhat more traditional five-door hatch, its ride height gives it the more athletic stance of these two. I do love the C40’s Fjord Blue finish, though (not to mention the contrast black roof), that looks more vibrant in real-time than it does on Volvo’s site. It doesn’t have quite the punch of the Fusion Red, but it manages to out-bright anything Hyundai offers for the 5. 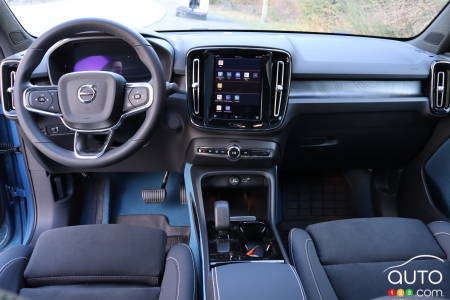 Familiar ground
Past the snugger rear seat, the C40’s interior deviates very little from either the XC40 or even the rest of the Volvo lineup.

You have the vertical 9-inch infotainment display, stubby electronic shifter, ultra-cushy thrones and digital gauge display. I'd say it’s “sleek”, but much more paired-back compared to the Hyundai. Sure, there are some appliques on the dash meant to look like a topographical map and the blue carpet inside gave me a bit of a start when I first glanced at it, but the fact is the Ioniq 5 sends a clear message that it’s a futuristic EV, through and through. The C40, not so much.

Not that it isn’t luxurious. The materials are top notch, the seats are as comfortable as we’ve come to expect from Volvo and the Harman/Kardon speaker grilles – while not quite as jeweled as the Bowers and Wilkins items found on other Volvos – look the part.

The infotainment system makes use of Android Automotive, meaning you can log in to your Google account from the car and have access to many of your most important apps. It’s a good system that works well, it’s just that the rest of Volvo’s interface leaves a little to be desired as its often text-heavy and takes more button presses than I’d like to access certain features, especially when it comes to electronic driver aids such as lane keep assist et cetera.

There was also no CarPlay support at time of writing; word is that’s coming in a future update but I heard that months ago when I sampled the XC40 Recharge so I guess time will tell. If it looks like a coupe, and they call it a coupe…
…then it must drive like one, right?
The C40 certainly has the power, pushing over 400 hp to all four wheels (that’s the only spec available) through a direct-drive transmission, so like in the Ioniq 5, power delivery is instantaneous soon as you hit the throttle. This is a properly fast car that doesn’t feel like it offers less power than the Ioniq 5, even though it does. It’s heavier than the Hyundai by about 100 kg, but it also gets 40 more lb-ft of torque than the Ioniq 5 to compensate.

You don’t have quite the handling you get from the Hyundai, however, and there the Volvo starts to betray its weight a bit. It changes directions obediently enough, but I didn’t sense quite the body control through quick left-right-left transitions as I did in the Ioniq 5.

The ride, however, is on-point and befitting of the luxury designs that Volvo is going for these days. Even with those big wheels, most everyday bumps are handled with panache and the grip is strong. That’s an important point, because when you have 400-plus hp being delivered at the snap of your fingers, you need the grip to handle it and even with the Michelin X-Ice winter rubber I was dealing with during my test, I felt pretty confident.

I would ask for some more precise steering, however. It’s direct enough, but the feel is woollen, to the point where I found myself wondering where my grip levels were at. It’s good that the quick start tests I attempted returned the grip they did because at least I had that knowledge as I started hitting the bends. Without it, I don’t know how much I would have trusted this steering rack to communicate what I needed it to. This is not a C40 problem, however - many of the new Volvos I’ve driven recently have left me feeling the same way. 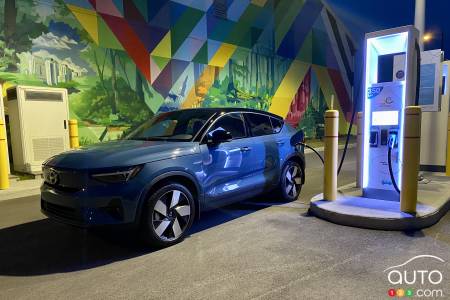 As far as range goes, the C40 is down a little on the Ioniq 5, officially, but during my mileage test of the C40, in which I started with 74-percent battery life and a predicted 239 km of range, I actually ended my 87 km journey having used just 50 km of range, a testament to the Volvo’s regenerative braking and coasting characteristics.

Be forewarned, however: the C40 offers 1-pedal driving but in that mode, the auto braking and regen (that is to say the EV motor running backwards) is so aggressive that small manoeuvres can be a challenge. Parallel parking, for example, is tough because there is no creep from the powertrain, forcing you to actually hit the accelerator pedal in order to move just a few feet. Needless to say, that led to some somewhat scary moments. Be sure to switch off 1-pedal driving for these types of moves.