It might be difficult to find anyone willing to describe the Pacifica minivan as a sexy vehicle. In this age of the SUV, it might even send those looking for a family vehicle running for the hills. Today’s consumers, it is said, want Pilots, Highlanders, Pathfinders, CX-9s and so on.

But it’s worth remembering that the very first Chrysler Pacifica, back in 2003, was a “family crossover”. It didn’t actually sell all that well, in fact that model’s dodgy reliability and mediocre reputation probably served as a drag on the Pacifica minivan when it launched.

No matter. For Chrysler it was a matter of pushing the restart button and starting over from scratch with the nameplate, and daring to swim against the present market current, pulling hard in the direction of utility models. And why not? The strategy is risky, but sometimes risk-taking is what it takes to succeed.

So it was that the Pacifica name returned in 2017, this time as a genuine, dyed-in-the-wool minivan - built on a Fiat platform. That architecture actually makes for a very comfortable vehicle, with a quiet, rattle-free cabin that offers a ton of space for legs, heads, hips, luggage, you name it. Space is not in short supply, in other words. 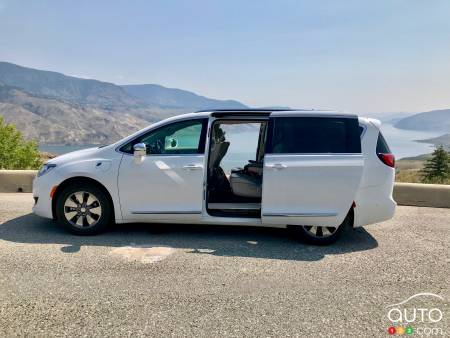 3,500 km and more… in a hybrid
Space was certainly a prime consideration for me as we set out on our summer family road trip, which would take us on a 3,500 km trip through Western Canada aboard this 2018 Chrysler Pacifica…hybrid. Well, that last little word would make me absolutely adore trekking along in this trusty minivan, and feel not a little pride in doing so!

We picked up the Pacifica in Calgary, and headed north and then west to Banff, Jasper, Whistler and Vancouver, before turning back to Calgary. The trip took us through mountain ranges, forests, deserts and flat roads, and along the coast. The Pacifica swallowed up the kilometres, and the route’s considerable climbs and descents, with no apparent effort. Engine, torque and power did exactly what was expected of them.

Overall comfort, in the Limited edition that we had, was outstanding, worthy of a first-class plane trip. The kids (14 and 10 years old) could adjust their seats in several ways, and had access to any number of storage spaces throughout the cabin, including in the third row. 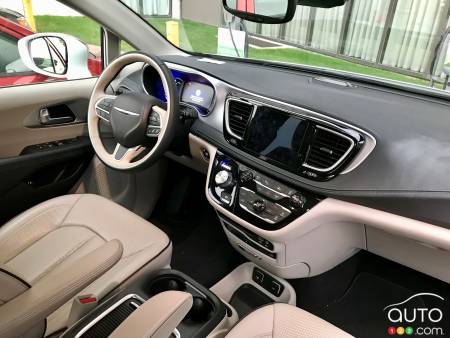 Two power sunroofs
There are actually two power sunroofs on the 2018 Pacifica, the first a large panoramic and the second a smaller one above for the third row of seats. The second-row passengers, meanwhile, get a Uconnect video system, with screens located on the back of the front-seat headrests. Each screen comes with its own remote control and wireless headphones, a 115V auxiliary input and an HDMI port.

That Uconnect system also runs through an 8.4-inch central screen in the front. It’s not easy to use at first, but we mastered it before too long. One nice feature is that you can move the icons around like on a smartphone to have easy access to those you use most often.

The dashboard has a 7-inch central screen that contains all driving-related data. It also houses two big gauges, one for the fuel tank level and the other - this being a hybrid, remember – for electric energy consumption.

Hybrid system
Now, about that hybrid system and its effectiveness. A big reason I chose the vehicle (in addition to all that space) was to be able to measure its highway fuel consumption. We know that, officially, a full charge of the battery pack gives the Pacifica a range of 53 km in “nearly full” electric mode. Keep in mind that in this vehicle, it isn’t possible to toggle back and forth between all-electric, mixed or gasoline-only mode. The system’s computer takes care of that. It’s a bit disconcerting at first, but you quickly get used to it. When you’re driving in urban settings, then, the electric motor powers the vehicle, but the combustion engine remains active and intervenes when deemed beneficial for preserving charge. 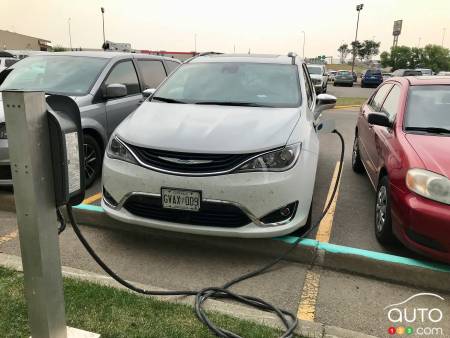 In my case I did little city driving, except in Vancouver, where ironically I wasn’t once able to use a public charging station. Not because there aren’t any, but because electric vehicles are common there and the stations were always in use by people working downtown. My own hotel didn’t have any charging station, which was surprising since, earlier on during our road trip, the most remote lodges tucked away in the Rocky Mountains had their own stations.

Free parking!
By the way, you should know that at several hotels we stayed at, my plug-in hybrid vehicle earned me a free night’s parking. Many places don’t charge for parking (even when indoors) for an electric vehicle, as well as offering up the use of a charging station.

In any event, I did most of my driving in Vancouver solely on gasoline power. Even then, my fuel consumption was not outrageous, given the size of the Pacifica. I used around 10L/100 km while in the city.

Electric range
The biggest revelation this family road trip had in store for me involved the electric range of the vehicle. Now, let’s agree on the basic reality that a full charge gives you a maximum all-electric range of around 50 km, as mentioned. This is what I expected at the outset of our trip. This even led me to ask the question, is it really worth it to use a hybrid system, when in any case the range is only 53 km, at best? But this, I was surprised to learn, is not how it actually works! 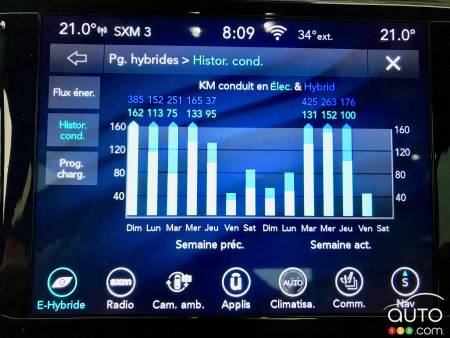 Right from the first days, I saw that about 30% of the highway kilometres I was driving were in electric mode. To illustrate: one day I drove a total of 547 km, and at the end of it the dashboard data showed 385 km driven on gasoline, and 162 km in electric mode. Another day it was 265 km in all, 152 of them on gasoline and 113 km on electricity.

Energy recovery
Essentially, this electric performance over and beyond the actual 50-km per-charge range is thanks to the vehicle’s energy recovery system that adds charge to the battery every time you brake or the vehicle decelerates, etc. 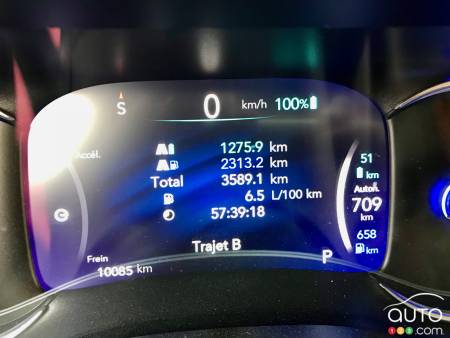 It’s worth remembering that were four people traveling in the Pacifica, plus a suitcase for each. Plus, I was always traveling at the speed limit, sometimes even slightly above (in B.C. some highways have a 110 km/h speed limit, and on a few it’s even 120 km/h), so not at optimal fuel-saving speeds.

Conclusion
I was thoroughly impressed by the Pacifica minivan, and found it to be well-designed and well-built. At $52,000 and up, Chrysler is not giving it away, to be sure, and for the same money I could turn to a Honda Odyssey or Toyota Sienna and get the same capabilities and features. At that price point you’re in your rights to expect the full range of active and passive safety systems, gadgets of all kinds and so forth.

But the killer standout feature of this Pacifica is its hybrid powertrain. I came away totally impressed by the V6 hybrid system. It provides the sound and torque of a V6 (let’s face it, a big step up from a 4-cylinder), with the fuel economy you’d expect from a subcompact.

The plug-in hybrid system helps you in the city or for short distances, as you have that 53-km range to get you where you want to go, without (or barely) touching the gas engine. Then it also helps you on the highway, because you still rack up 30% of your kilometres on electric energy.

Now, the question that remains is to figure out in how long the new hybrid Pacifica, admittedly more expensive at the outset, becomes financially advantageous, taking into account the kilometres driven per year on average. Time to get out the calculator! 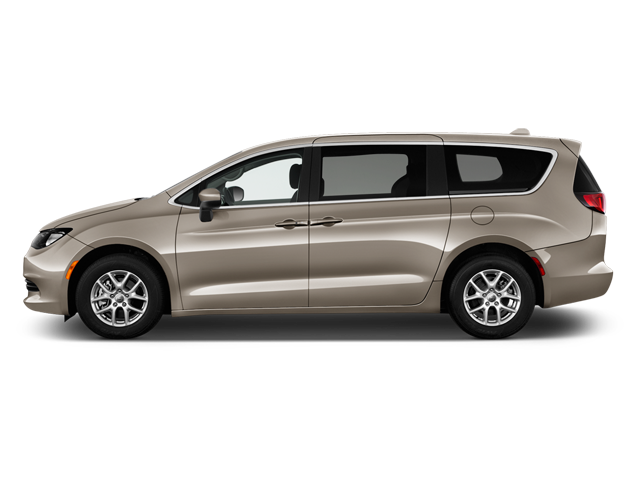 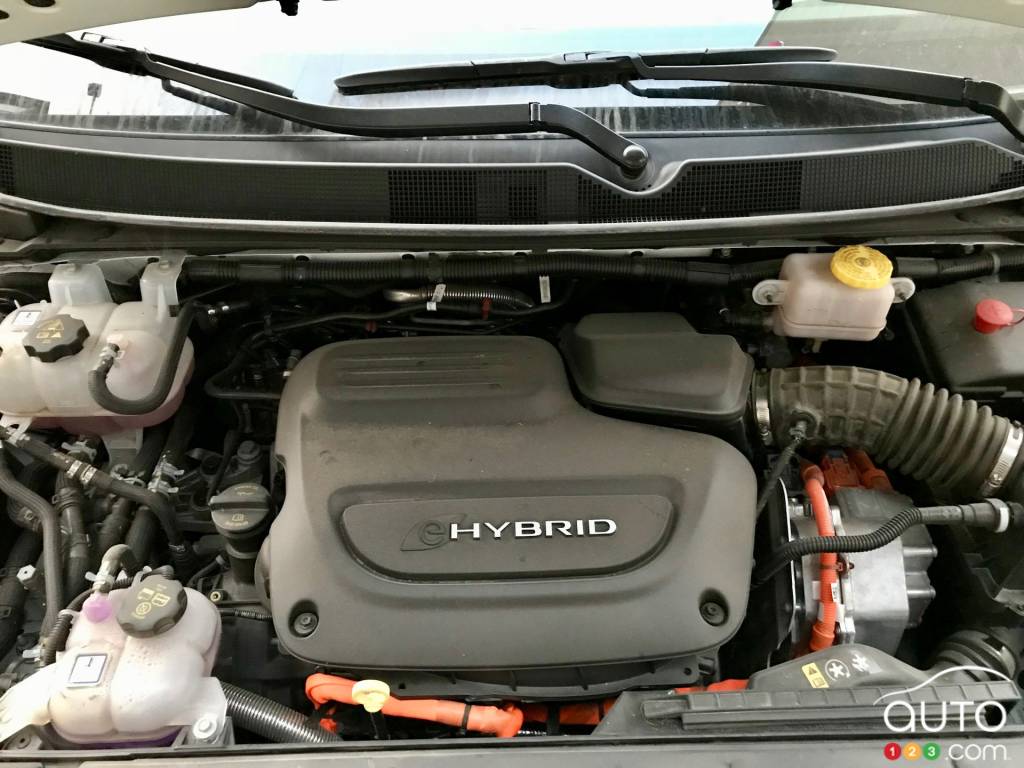 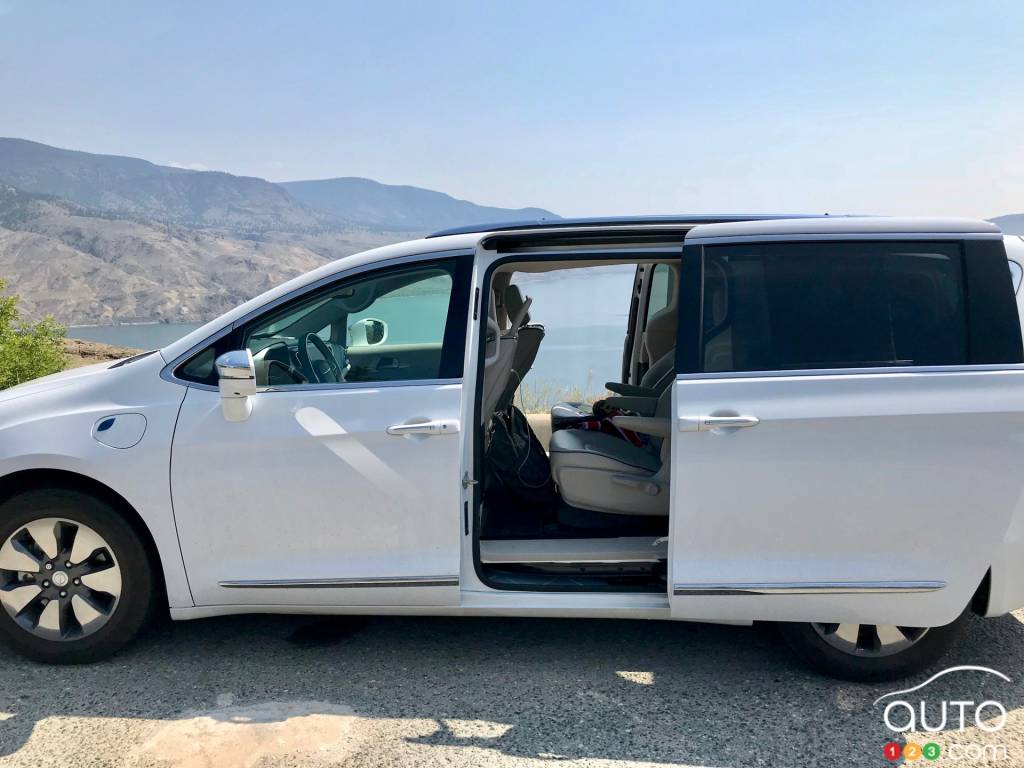 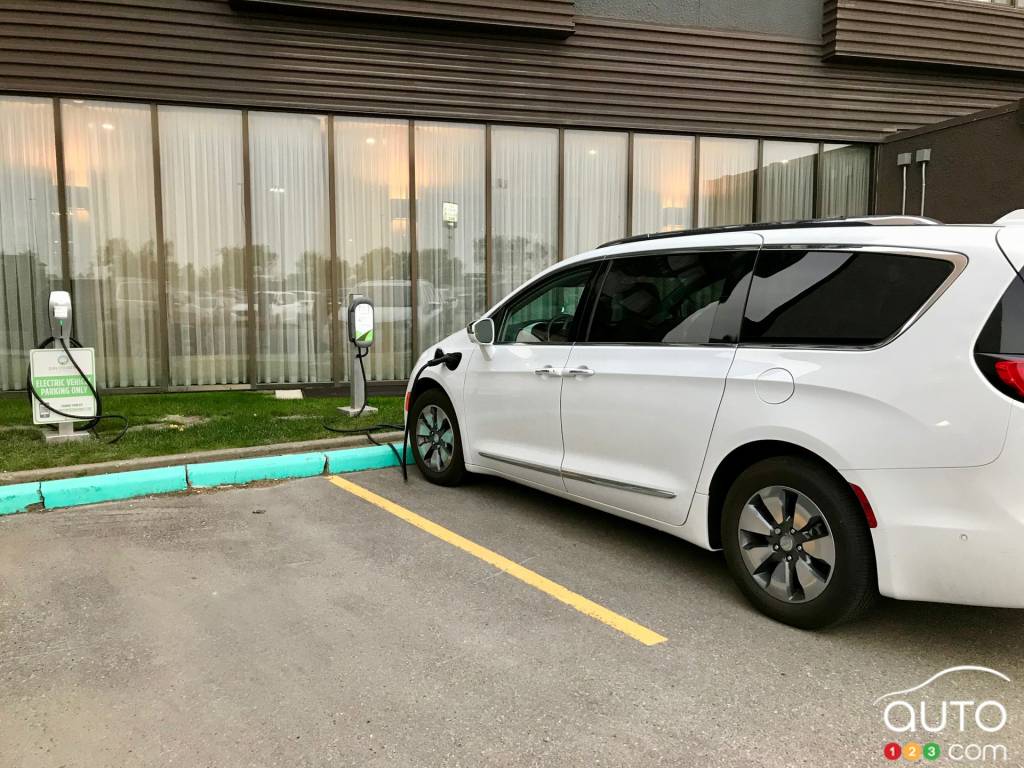 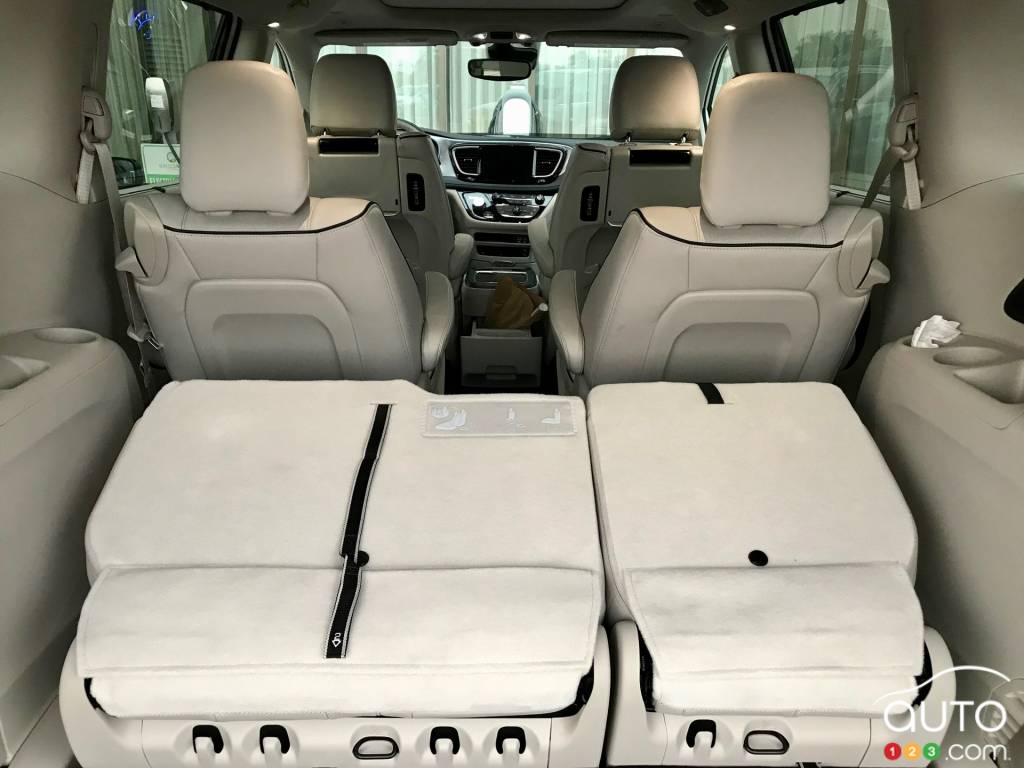