When Volvo, highly reputed Swedish maker of cars, presented its new S90 luxury sedan, fans of the brand were confused. Beautiful as it is, the S90 resembles not at all what Volvo had gotten us used to for all those years. Instead of an elevated chassis with squarish lines, Volvo proposed a long, streamlined sedan with aerodynamic lines that Volvo acolytes could recognize by the massive rectangular front grille with its diagonal band.

We should start by pointing out that Volvo is not, technically, Swedish anymore. It belongs to a Chinese mega-conglomerate. As we all know, a few years back Volvo passed from Ford into the hands of Chinese manufacturer Geely Holdings. It took some time for top brass on the Chinese and Swedish sides of the aisle to see eye to eye, and in a way you could say that the S90 is the signal that harmony has been achieved within the firm. Especially that the car is assembled at the Geely’s Daqing plant. So yes, this Volvo is actually Chinese. And its long wheelbase allows it to more easily accommodate rear-row passengers, which is a particular preference of Chinese consumers.

Otherwise, Volvo last year announced that, as of 2019, every new Volvo will incorporate an electric motor of some sort in its powertrain. The new S90 thus gets one of its very own. This is the version reviewed here in fact; the T8 Twin Engine has, well, two engines. The name does, it’s true, open the door to a certain amount of confusion, some consumers perhaps concluding that the model will be made available with a V8 to power that big chassis. Nothing could be further from the truth. The combustion engine driving the newest and  biggest Volvo remains the 2.0L 4-cylinder turbocharged AND supercharged motor that Volvo introduced a few years ago in a majority of its products.

In the S90 T8, it delivers 313 hp at 6,000 RPM, but as it’s an electric-hybrid model, it combines with a pair of electric motors producing 87 hp at 7,000 RPM; this package is also found under the hood of the XC60 and XC90 hybrid crossovers. The setup places the gasoline engine in front for traction, while a set of 10.4 kWh lithium-ion batteries supply the power to an electric motor that runs the rear wheels. Meanwhile a second electric motor resides in the transmission tunnel and also serves as an integrated starter. According to Volvo, this package delivers 400 hp to the wheels. The car requires drivers to plug it in to an outlet to recharge the batteries, and Volvo says for that they get 35 km of range on all-electric power before the combustion engine has to kick in.

Volvo Canada provided us with a relatively well-equipped S90 T8 to test it out and try to answer that question. Quite magnificent decked out all in white, the sedan certainly attracted its share of attention of car lovers, many of whom were convinced they were looking at a grand German saloon before catching the Volvo name on the back. Slide in behind the wheel, however, and you quickly catch sight of different instruments already found in other models form the brand, namely the XC90. In truth, just about everything is digitized, and it takes a bit of time to tame the touchscreens before you can get rolling. Among the items worth mastering beforehand are the drive modes, such as Pure, which entails using only the electric motor (good for, at best, 20 or so kilometres) and Hybrid, which lets the computer play around with the two power sources and thus call on the combustion engine as needed. This mode allows for maximizing electric range. That said, and this applies to many of the new models coming out with such complicated screens, it takes some studying and futzing around before you finally master it all.

Without pushing things too hard, and by staying exclusively in Hybrid mode, we spent a week driving this beautiful car without once being able to discern when the computer switched us from the electric motor to the gasoline engine, although the latter did make its presence felt when we called on it more aggressively. In other words, all of it happens quite transparently. The maximum range we were able to attain was close to 40 km, by driving very prudently and with a light touch.

As for performance, going from a stop to 100 km/h takes all of five seconds, more or less, and passing capability is impressive. Of course, the trade-off is reduced range. By the way, we only had access to a regular exterior 120-volt outlet to recharge the S90’s batteries, but it took just eight hours or so to get a full charge. The only false note was a seemingly small detail: the electric cable is too short, only about five feet long. On the plus side, if you’re worried about getting that cable stolen, know that it can only be removed from the plug on the car once you unlock the doors. Personally, I did find it annoying to roll up this quickly filthy (especially after a rainfall) cable to store it in the trunk, though Volvo did think to include a bag to place it in when it’s in there.

There are a lot of points to cover with this big Volvo, which weighs over 4,700 lbs. Its on-road behaviour is strongly influenced by this imposing weight, but that’s the price you pay for driving around in such a sumptuous limousine. It is incredibly comfortable and it’s also fast, plus visibility is very good. Once again, the instrumentation requires a period of adaptation, but driving position is impeccable. The S90 T8 comes with a close-to-autonomous driving system called AutoPilot, which is activated by a button on the steering wheel linked to the automatic cruise control. This is combined with a distance-control system that reads where the vehicle in front is and keeps the vehicle between the lines of its lane. The system is highly effective, but if you let go of the steering wheel to watch it in action, a message appears within a few seconds to ask you to re-take the reins.

We previously reviewed the S90 for its 2017 model-year, which is a lightly less-developed version. You can get there a good idea of all the interior elements and accents. For me suffice to say that the model is a shining example for others to follow when it comes to quality and luxury, for example with the superb multi-speaker Bowers & Wilkins audio system. I also appreciated the head-up display, the big panoramic sunroof and the ensemble of safety and drive-assist technologies. Another positive, especially when you compare it with a model like the Ford Fusion Energi, similarly configured with its plug-in hybrid powertrain), is the massive trunk unencumbered by the battery pack. I was less taken with the gear shifter, which requires you to nearly go into Neutral before you can get to Reverse and Drive.

As mentioned, starting price for the S90 is $74,950. But my tester, for example, was fitted with extras like the $1,500 Convenience Package (parking assist, nav, 12V plug in the trunk), the $1,250 Climate Package (heated rear seats, steering wheel and wipers), the $2,000 vision package (varied interior rear-view mirrors, power fold-in side-view mirrors, rear transversal collision warning, 360-degree camera), the $900 metallic paint, the $3,250 Bowers & Wilkins audio system, the $1,000 20-inch alloy wheels, and the $1,150 head-up display. With all that you’re up to $88,350, to which you have to add $2,015 for transport and preparation. As for fuel consumption? Well that’s rather better news. It cost me a mere $16.75 to drive this car for nearly 300 km, and that’s with our skyrocketing gasoline prices in the Montreal area. Translated this worked out to 4.1L/100 km. and isn’t that what we expect, or hope for, from a plug-in hybrid car? 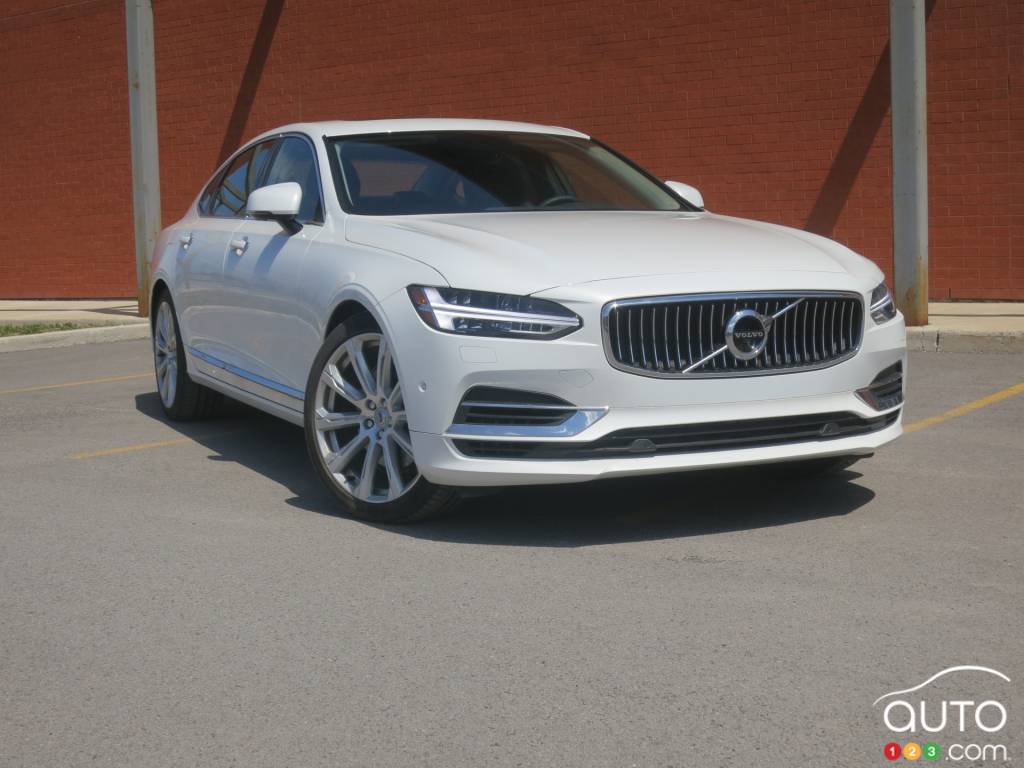 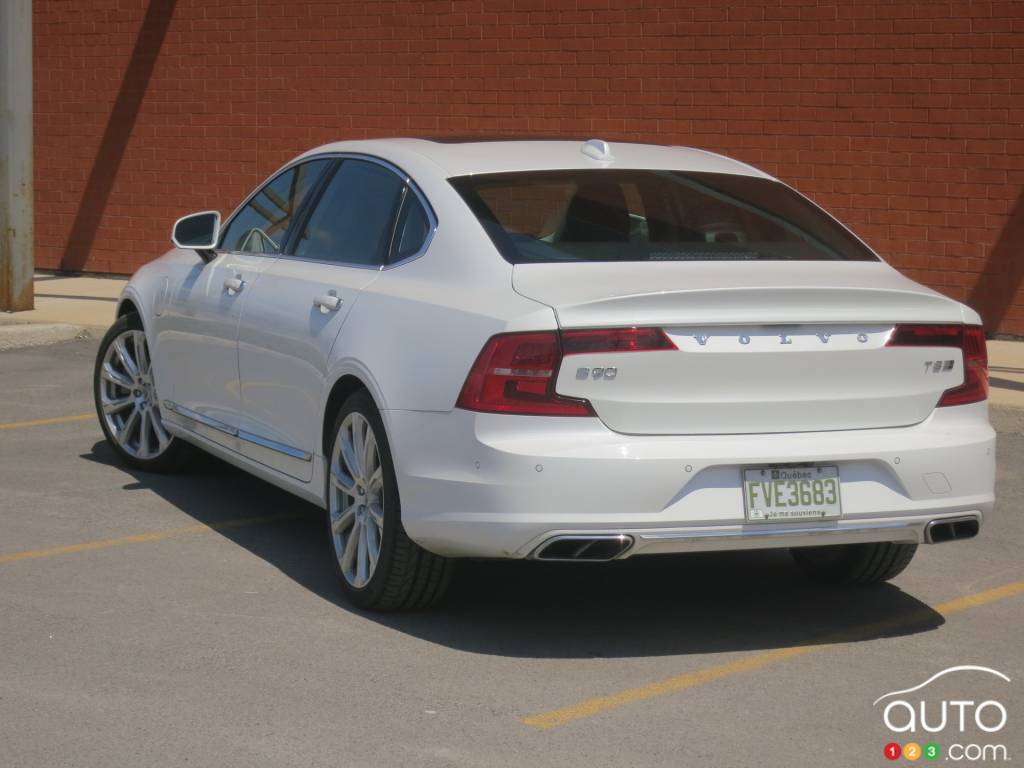 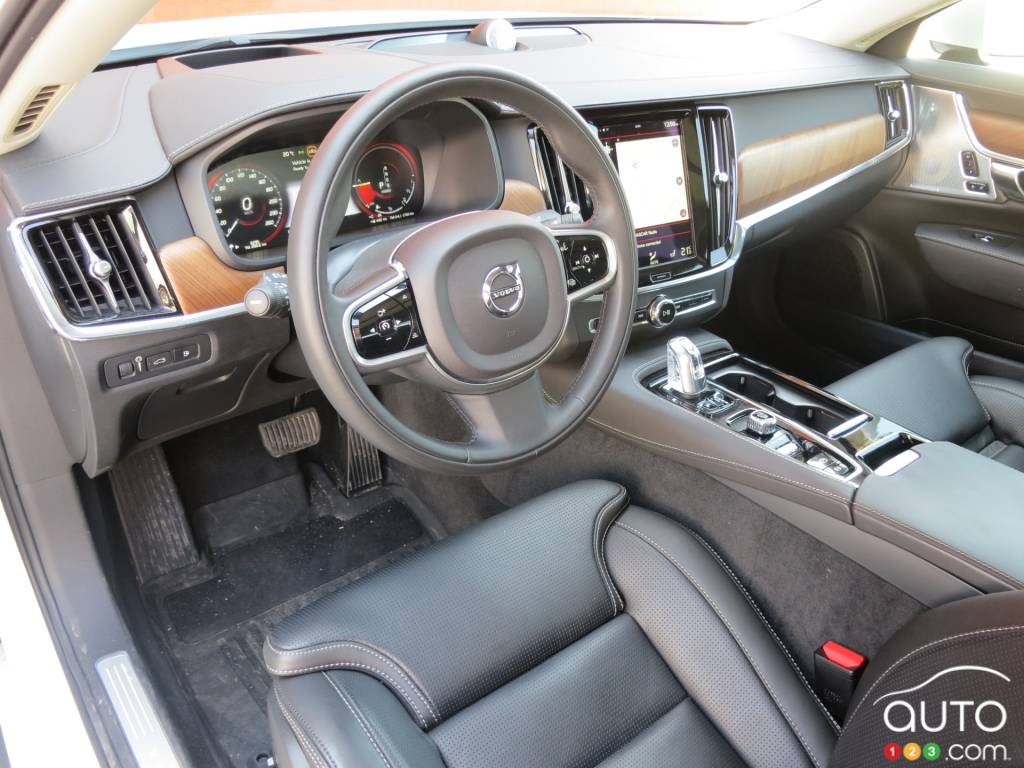 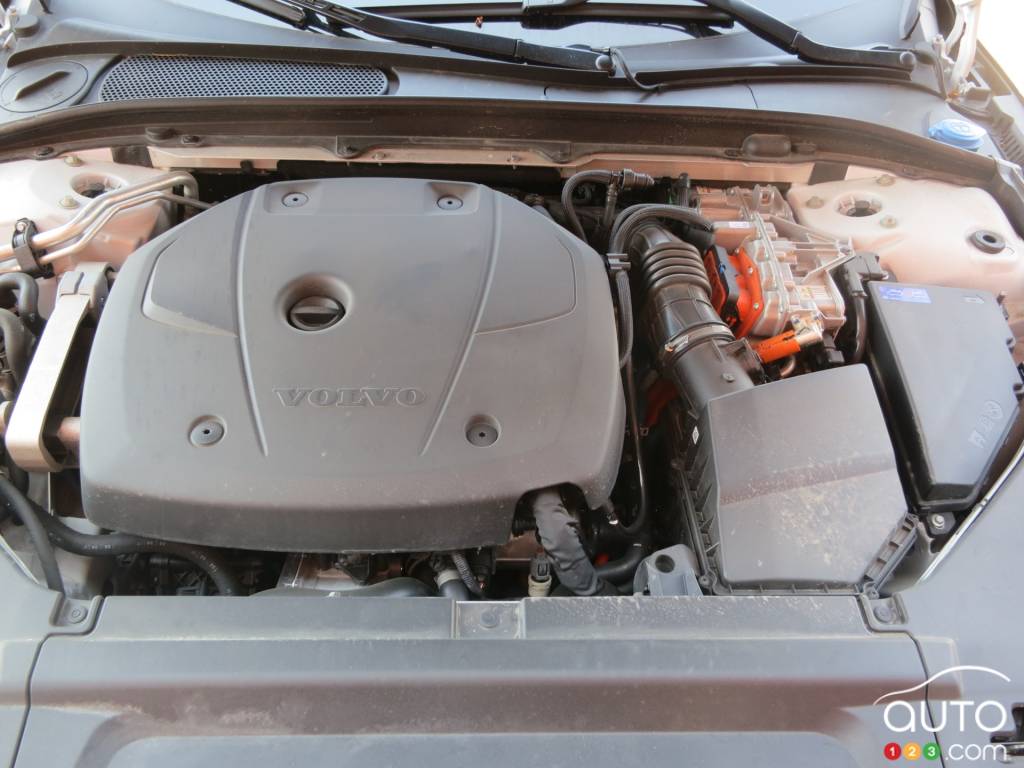