Yes, you read that right.

This past week, FCA’S performance parts manufacturer announced that fans can now place pre-ordered for the HEMI crate engine, if they’re ready to fork over $29,995 USD. The announcement’s timing was anything but haphazard: it’s the fourth month of the year, and the 26th day of that month.

426 Hellephant
As for the name of the engine, it refers to the Hellcat unit that’s been offered for a few years now in various models under the FCA umbrella, as well as to the name given at the time to the famous 426 engine, the Elephant.

Paying the hefty price tag gives buyers the engine bloc (7.0L V8), along with a few other components like the water pump, flywheel, front sump oil pan, fuel injectors, coil packs and supercharger. Pitch in another $2,265, and you get an assembly kit meant for car models older than the 1976 model-year.

And if you need other accessories, for instance an air conditioner unit or a kit for a custom exhaust manifold, Mopar has that for you as well - for modest added sums of course.

During the initial presentation at SEMA, the engine drew intense interest; right then and there over 1,000 people expressed their desire to order a crate engine.

We fully expect stories of cars getting this crate engine fitted under their hoods will start making the rounds online very soon. We really hope none of those stories will be of accidents or fatalities arising from the installation of this engine in cars that are not meant to handle that kind of brute power. 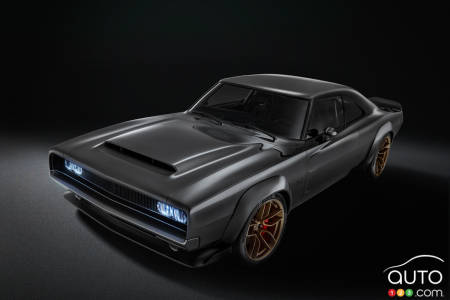 At the 2018 SEMA show in Las Vegas, Mopar revealed its all-new 1,000-hp engine, the Hellaphant, and more. The Hellaphant made its debut under the hood of a r...