An auction house if giving interested buyers the chance to acquire a two-faced Dodge. Meet the two-headed monster…

Auction houses that deal with automobiles generally tend to offer up models that are rare, exceptional or both. Above all, they’re likely to be cars seen as valuable by collectors. The Mecum Group is currently preparing to auction offer a vehicle that is certainly rare and exceptional, but not one you could call a hot commodity on the collectors’ market.

In fact, most folks might not even know it exists, since it is a handcrafted piece. The model in question is a mashup of a 1981 Dodge Colt and a 1981 Plymouth Champ, a two-headed monster set to go to the highest bidder next month.

The description provided by Mecum doesn't give too many details, but the images show us pretty clearly that we're looking at two cars that have been split and then merged. The resulting combination is peculiar, but we doff our hats for a job well-done, with strong attention to detail.

The two-faced car looks very symmetrical, for one thing because the two ends are almost a mirror image of each other. The model has also been repainted in red and covered with a black vinyl roof. 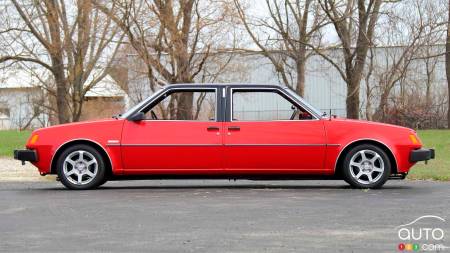 The two-tone theme is carried over into the cabin; one half is black, with black leather seats with a centre strip and red stitching, while the other is the opposite, with a red interior with black stitching and a centre strip in the same colour. 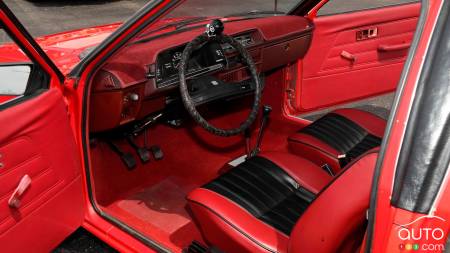 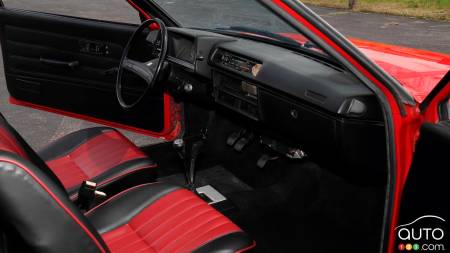 Under the hoods (yes, there are two of them) are matching 1.6L 4-cylinder engines, both mated to a 4-speed manual transmission. And to answer a question – nay, the question – you’re burning to ask, yes, this car can be driven from both sides.

No price is displayed on the auction group’s website, but know the two-faced Dodge/Plymouth is being offered without reserve. The car is part of Dallas Hawkins' extensive collection of American performance cars, which includes several Chevrolet Camaros and Corvettes.

If you want to turn heads (sorry) this summer with a unique classic car, you'll be hard pressed to find a better one. 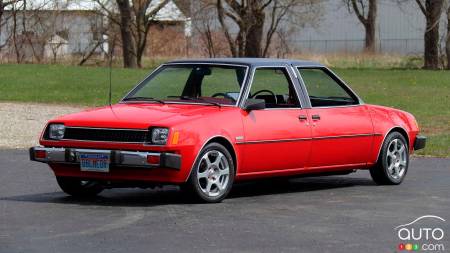 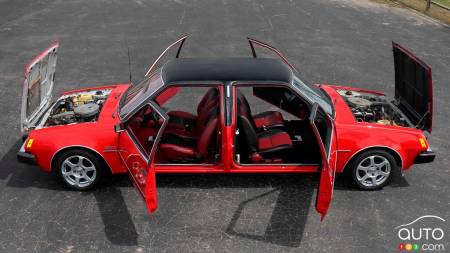 And you should know that although this car is, as mentioned, a unique piece of machinery, it’s not actually, totally unique. During a visit to the Lane Motor Museum in Nashville in 2013, I had the opportunity to discover not one but two two-headed models, a Citroen 2CV and a Honda Civic. The latter was even spotted a second time at a lemon festival in California in 2017.

Just think of it, this could make backup cameras obsolete. 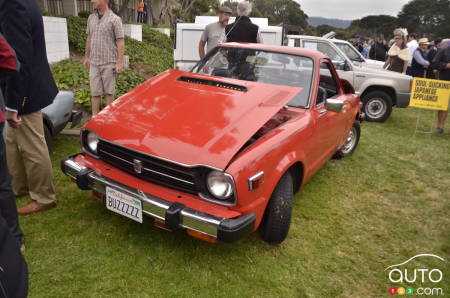 Photo: D.Rufiange
Two-headed Honda, during the lemons contest at Pebble Beach, in 2017 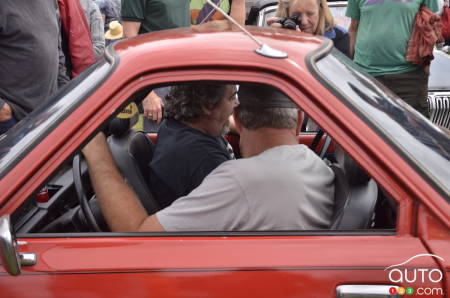 A Massive Collection of Vintage Muscle Cars Is Going to A...

Rick Treworgy's amazing collection of muscle cars goes up for auction at the end of January. The collector’s Muscle Car Museum currently houses over 200 perf...