The Mecum group is holding an auction this coming weekend in Indianapolis, and the star attraction will undoubtedly be a limited-edition 2017 Ford GT. Not because of its good looks and its rarity, but because it may not be legally possible for its owner to sell it.

The imbroglio arose from a dispute regarding the purchase contract for the car. According to Ford, a clause prohibits buyers from turning around and reselling their GT for at least 24 months. The idea is that the automaker retains control over just who buys the super-expensive supercar, but also over its price.

A Ford GT retails for around $450,000 USD. By limiting the number of units produced to 450 in all, and by placing restriction on any resales, Ford hopes to avoid having the price soar on the open market.

And yet, somehow, one of those units is being put up for auction on Saturday. And it’s easy to imagine that some well-heeled buyers, who didn’t make Ford’s cut when the model was first offered for sale, could create a bidding frenzy and send the price skyward.

Ford is watching the situation closely, though it says it won’t make any official statements to do with individual cases involving its clients. They did allow themselves this:

“What we can say is that all Ford GT customers sign contracts, which include an agreement not to sell the car for at least two years.”

It seems, however, that this may not be such a clear-cut fact. A previous case involving John Cena and his 2017 Ford GT resulted in Ford suing the owner for breach of contract, specifically the clause mentioned here. Cena demonstrated that nowhere in the purchase contract did it specify that he could not re-sell his car within 24 months of buying it.

Will this new seller be subject to legal action by Ford? We can be sure that the affair won’t end this weekend. Unless it can be clearly shown that the infamous clause does, in fact, exist… or not. 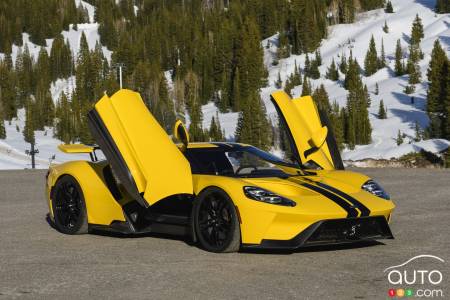