You may have heard of BMW’s ambitious NUMBER ONE>NEXT corporate strategy, which involves introducing no fewer than 40 new or redesigned models in a span of 24 months. This week at the Montreal Auto Show, you can see four of them in their Canadian premiere.

Two of the new models are the X2 and X3, which means the BMW X lineup of utility models is now complete. Well, not counting the upcoming X7 full-size SUV!

2018 BMW X2
Closer to a coupe than an SUV, the new BMW X2 projects a sportier and more stylish demeanour than the X1. Interesting fact: the signature double-kidney grille has been inverted so that it now widens toward the bottom. It’s the first time this design detail has been incorporated in a modern-era BMW.

The 2.0L 4-cylinder TwinPower Turbo engine with direct injection that powers the X2 generates 228 hp and 258 lb-ft of torque, which translates into 0-60 mph (97 km/h) acceleration in 6.3 seconds. The intelligent xDrive all-wheel drive and an 8-speed Steptronic automatic transmission are also part of the package. The trunk, meanwhile, can hold 611 litres worth of luggage, or up to 1,418 litres with the rear seats folded down.

The X2 will be heading for dealerships this coming spring; pricing has not been officially announced, but it’s expected that starting price will come in at just under $45,000.

2018 BMW X3
For its part, the third-generation BMW X3 sports a more dynamic look than before. Designers have upped the chic factor even while they made it more rugged, notably by sharpening its lines, beefing up its grille and wheels and revising the air intakes and lighting elements. BMW is also offering new customization options.

In terms of its handling on the road, systems like the M Sport chassis, variable suspension, M Sport brakes and variable sport steering are available to buyers who want to push driving dynamics and handling to a higher level. Models available to consumers include the 248-hp X3 xDrive30i ($48,000) and a first M Performance version, the 355-hp X3 M40i ($61,500). BMW Canada is taking orders on the model now.

6 Series GT and M5
The automaker’s two other Canadian premieres in Montreal this year are the 6 Series Gran Turismo, a new rival to the Audi A7 and an ideal luxury car for long-distance travel, as well as the sixth-generation BMW M5, which can accelerate from 0-100 km/h in only 3.4 seconds on the strength of its 4.4L TwinPower Turbo V8 engine (600 hp, 553 lb-ft of torque). These numbers make it the top performance dog in the BMW lineup.

Hybrid and electric models
Lastly, five of BMW’s nine plug-in models that will be on the market in 2018 are also on hand at the 2018 Montreal Auto Show. Among them, the i8 Protonic Edition Frozen Black, the 530e, the i3s REX, the X5 xDrive40e and the MINI Cooper S E Countryman ALL4. As for the all-new 2019 i8 Roadster, first unveiled in Los Angeles, it will most likely make its Canadian debut next month in Toronto. Stay tuned! 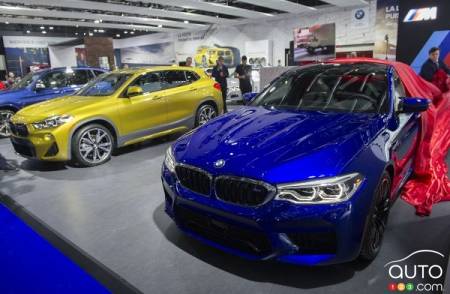 It’s important not to compare the 2018 BMW X3 M40i to just any other SUV on the market. This vehicle sits squarely in the luxury compact SUV segment. The reg...