The redesigned new 2019 Audi A7 Sportback received its world premiere yesterday, revealing another model that incarnates the automaker’s new design philosophy. Audi has ambitions to redefine the Gran Turismo, and has infused its new A7 Sportback with a more versatile interior, advanced technologies and sportier driving dynamics.

What styling!
Inspired like the new A8 sedan by the prologue concept, the new 4-door hatchback has sharper lines and a more athletic silhouette than before. This is particularly evident in the more aggressive styling of the grille and the front headlights, as well as in the larger (up to 21-inch) wheels. The higher-end version even features Matrix laser lights. Also notable are the discreet presence of chrome and 8 new colour choices (for a total of 15).

Now more spacious, the interior of the 2019 Audi A7 Sportback recreates the ambience of a futuristic, minimalist lounge, though it takes care to coddle the driver with easily accessible command dials and displays, which include the new MMI touch response control system with two high-resolution touchscreens – a major change from the previous-generation A7, which used a rotary push-button on the console. The MMI navigation plus system also comes with Audi’s famed virtual cockpit and its 12.3-inch screen behind the steering wheel. Four different audio systems as well as a host of connectivity and infotainment systems are also available.

The power panoramic sunroof was improved to allow even more light into the cabin. In back, cargo capacity is 535 litres, enough to store two golf bags sideways; with the rear seats down that capacity climbs to 1,390 litres. A power liftgate, activated by foot movement, is among the many available options.

Cutting edge
On the technological front, the big change is the inclusion of the new Audi AI remote parking pilot, activated via smartphone. Ticking off all the options boxes can add up to 39 other drive assist systems, spread among different packages, to the new Audi A7 Sportback.

The 3.0L turbo V6 and its 340 hp are back, but torque has been increased to 369 lb-ft, allowing for 0-100 km/h acceleration in 5.3 seconds. Twinned with a 7-speed S tronic transmission and quattro ultra all-wheel drive, the engine will include an optimized stop-start function and be aided by a belt alternator starter (BAS) along with a mild hybrid system in the form of a 48-volt primary electrical module. This technology allows the car to drive in freewheeling mode with the engine off before starting it comfortably via the BAS.

Other elements introduced or upgraded to make the A7 even more agile and comfortable than before include the dynamic-all-wheel steering, the electronic chassis control system and an improved adaptive air suspension (one of four suspension systems offered).

Whence to Canada?
The new 2019 Audi A7 Sportback will be available for purchase in Germany beginning next February. We will provide updates as soon as dates and pricing for the Canadian market become available. 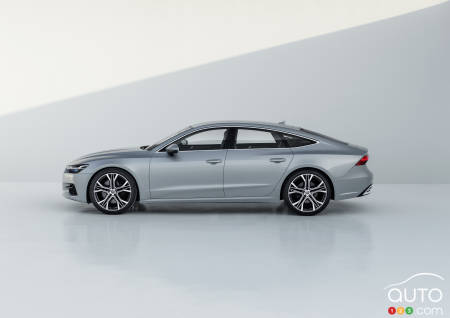 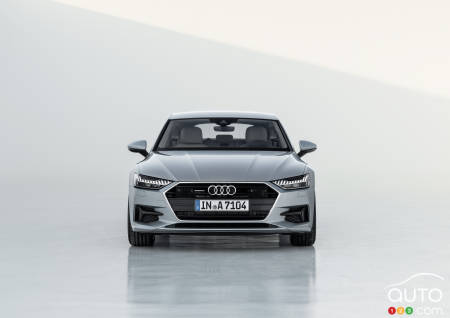 Audi has completely transformed its 2019 A6, a midsize sedan tasked with competing against the BMW 5 Series and the Mercedes-Benz E Class, among others. Here...