Just days after celebrating its world premiere in Detroit, the all-new 2019 Kia Forte makes its Canadian debut at the 2018 Montreal Auto Show. Beyond its refreshed design, it is said to be safer, more fun to drive, stingier on fuel and equipped with a host of innovative and practical technologies.

“With these improvements, paired with the stylish new design and a more fun driving experience, we’re confident that Canadians will see the tremendous value equation that Forte will provide when it joins our lineup this fall.”

Design and technology
In reworking the Forte’s styling, Kia designers opted for an elongated hood and a short trunk for a fastback look. The base of the windshield has been pulled back as well, by 12.5 cm. Kia’s well-known tiger-nose grille has been reworked and is flanked by air curtains for improved aerodynamics. In back, a notable change is a horizontal trim that connects the taillights – as seen previously on the new Sportage compact crossover.

Now longer and wider (4.64m and 1.8m), the 2019 Kia Forte is able to offer increased rear legroom and trunk space. Kia claims, in fact, that interior volume and cargo capacity in the new Forte are superior to virtually all of its rivals. Visibility has also been improved.

As per current industry trends, the new dashboard is streamlined and more horizontally aligned. Only a few buttons adjoin the new 8-inch touchscreen (which features Apple CarPlay and Android Auto compatibility). With certain smartphones the system can voice-read text messages via the Bluetooth function. An available wireless charging pad above the dashboard eliminates the need for input cables. Kia’s UVO Intelligence telematics system will also be made available in the 2019 Kia Forte.

Driving dynamics
Kia has fortified the 2019 Forte with a more-rigid structure, while boosting the comfort level of the seating thanks to increased lumbar support and denser seat foam, making the cabin quieter and the steering more responsive, and revising the geometry of the suspension for a smoother ride.

The engine retains the same output capabilities (147 hp, 132 lb-ft of torque), but buyers will be able to opt for a new continuously variable transmission (CVT) in lieu of the base 6-speed manual gearbox. Kia’s engineers developed the CVT with adaptive-style shift logic with a chain-type belt instead of push belt – a first in the segment. Acceleration should, as a result, be linear and smooth.

The 2019 Kia Forte will make its appearance at Canadian dealerships in fall of 2018. The company has also confirmed that the redesigned five-door hatchback version should follow in the first half of 2019. 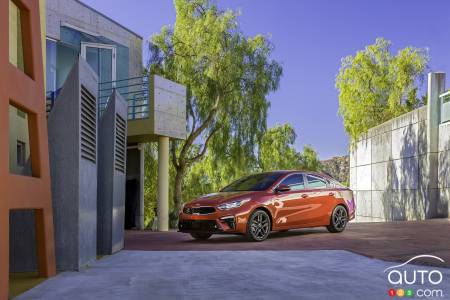 To give it the weapons to emerge victorious from the slugfest that is the compact sedan segment, Kia had to think big, or should we say small, and make of th...

We take a first drive in the next-generation 2019 Kia Forte sedan, still a close cousin of the Hyundai Elantra but sporting a more distinctive robe. The new ...