Ottawa, ON – It’s probably no accident that the setting Kia Canada chose to present its new 2019 Kia Forte sedan to an impressive gathering of automotive journalists sits squarely in the middle of the region of Canada where most small cars are sold.

In Quebec, and to a large extent in Ontario as well, smaller vehicles are still very popular. In this case, even though the new edition of the Korean automaker’s compact sedan has taken on the airs of a mid-size, it still competes in the smaller segment, against the likes of the Honda Civic, Toyota Corolla and Mazda3, and of course the model’s near-cousin, the Hyundai Elantra.

The wave of SUVs taking over the industry has of course impacted the Kia lineup along with just about everyone else's – think of the Soul, the Sportage and Sorento, and the massive Telluride, soon to make its debut – but the manufacturer understands that there is still a significant market for traditional cars.

Unfortunately for the small army of journalists on hand, the majority of our first encounter with the new Forte took place in the rain. At least, these blustery fall conditions allowed us to test out the grip and performance of the car on wet, slippery surfaces. On this day I drove the EX trim of the model, which Kia estimates will be the most popular version of the Forte, accounting for around 50% of sales in Canada.

The same skeleton as the Elantra, but…
For this fifth generation of the model – if you count the first two, sold under the name Spectra – the Kia once agains borrows the platform used to underpin its close cousin, the Hyundai Elantra. The folks at Kia confirmed to us that Forte gets some distinct adjustments to the suspension and to a few other elements; for the rest, it’s basically the same car.

And yet, seen from the outside, that’s not really that apparent. The new Elantra is more streamlined in its appearance than ever, while the Forte is more sober-looking. In my opinion, this more “peaceful” design may not age all that well as the years go by. The profile of the car brings to mind those of the Chevrolet Impala or the Volkswagen Passat, especially with the very straightforward fenestration, but on the other hand the two extremities of the Korean compact do show encouraging signs.

The front fascia, for example, takes its inspiration from the superb Kia Stinger; the front grille is a little more dynamic than in the outgoing Forte. I really like the lower part of the front end, which integrates not only a small spoiler at its base, but also the dark grill pattern with the x-shaped turn signals placed below the optical blocs, which, in this case are LED. Unfortunately, to get the same lighting in the back, you need to fork over another $1,500, the cost of stepping up to the EX+ model.

The same applies to the size of the alloy wheels, by the way. Those on the car provided to us for the day had 16-inch wheels – too small for my taste! On the other hand, these pint-sized wheels do improve comfort and reduce your tire expenses in the long run.

The same mechanics, but…
No surprise, the sharing of components with its Hyundai near-doppelganger continues under the hood. The same 2.0L 4-cylinder Atkinson cycle engine that provided the outgoing Forte – and the Elantra – with 147 hp and 132 lb-ft of torque is back in service for the 2019 edition. Kia still offers a 6-speed manual gearbox to go with the LX base model, but it was easy to read from the expressions on the faces of the Kia PR people on hand that this option is on seriously borrowed time. We weren’t at all surprised that no manual transmission-equipped Forte was made available for our first drive.

The big change for the new-generation Forte – and actually for the brand as a whole – is the arrival of the very first CVT transmission in the history of the brand. Or I should say, the IVT transmission, for Intelligent Variable Transmission. This modified name comes from the manufacturer preferring to use a chain instead of a band for its variable unit. The reasons for this were two-fold: first, it would reduce the elastic effect associated with CVTs, and second, it would improve the Forte’s fuel consumption.

At the wheel
The few hours we got to spend behind the wheel of the 2019 Kia Forte did allow us to confirm that the chassis of the sedan is much stiffer, and that even when riding on 16-inch wheels the car holds the road really well even on tightly winding and pockmarked roads. While the Forte is no firebrand on the performance front, it did display some very nice qualities as we took it around the back-country outside of Ottawa. The Kia sedan even passed the old level-crossing test with panache.

I was surprised by the steering, which is very direct for a car in this segment - a sensation that was amplified by the steering wheel’s shape. Which, by the way, is leather-wrapped in every trim in 2019. Braking is not particularly powerful, but its performance is at worst average for the segment.

And how about that IVT transmission, you ask (maybe). Over the years, all of the manufacturers have managed to improve the performance of CVT transmissions, but in the case of the Forte, it’s a first. And I can honestly say this first drive left a positive impression by and large. In sustained acceleration, the little 4-cylinder makes itself heard, which is to be expected, but the reaction of the powertrain is not as unpleasant as I expected. The eight “fake” gears create the impression you’re at the wheel of car with an automatic transmission. What’s more, the fact that Kia’s engineers made an effort to insulate the transmission tunnel makes for a quieter cabin. At highway speed, the only sounds invading the interior space came from wind flowing through the side-view mirrors.

The last word
The 2019 Kia Forte behaved like a pro during this first drive. The stiffness of the chassis, the sporty-ish steering, the firm-ish suspension and even the performance of the IVT all came down in the plus side of the ledger. Another big plus was the average fuel consumption, which hovered around 7.0L/100 km, which we could have improved on if we hadn’t been driving so "heartily" on those mountainous roads.

The other salient point we took away from our day with the new 2019 Forte is its undeniably excellent initial quality. This doesn’t address the car’s ability to hold up for a number of years – something that Kias haven’t always excelled at in the past. But here in the right now, the materials are well-constructed and of good quality, with the possible exception of the seats that feel a little bargain basement. Beyond that, we’ll allow ourselves a grain of skepticism as to its durability in the long term. This is just a hypothesis, but I do ask myself how this 2019 Forte will behave in five years’ time!

And what about the Forte5?
Kia is evasive regarding the possibility of the Forte5 resurfacing, but with the compact hatchback segment showing strong stability, the five-door version of the Forte could well rejoin the fray in the next year. 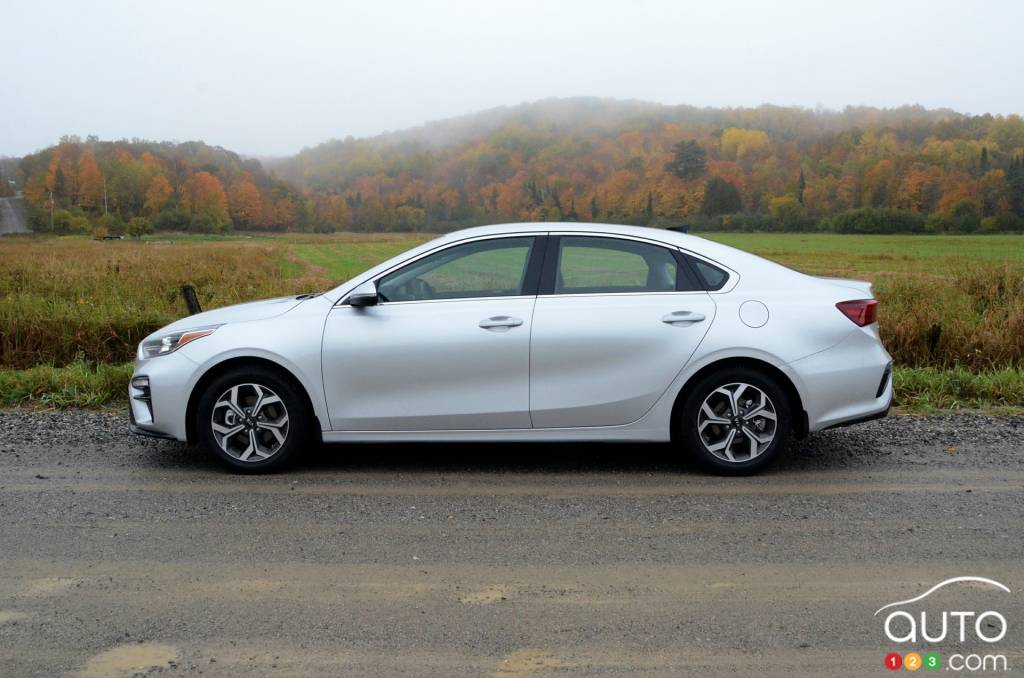 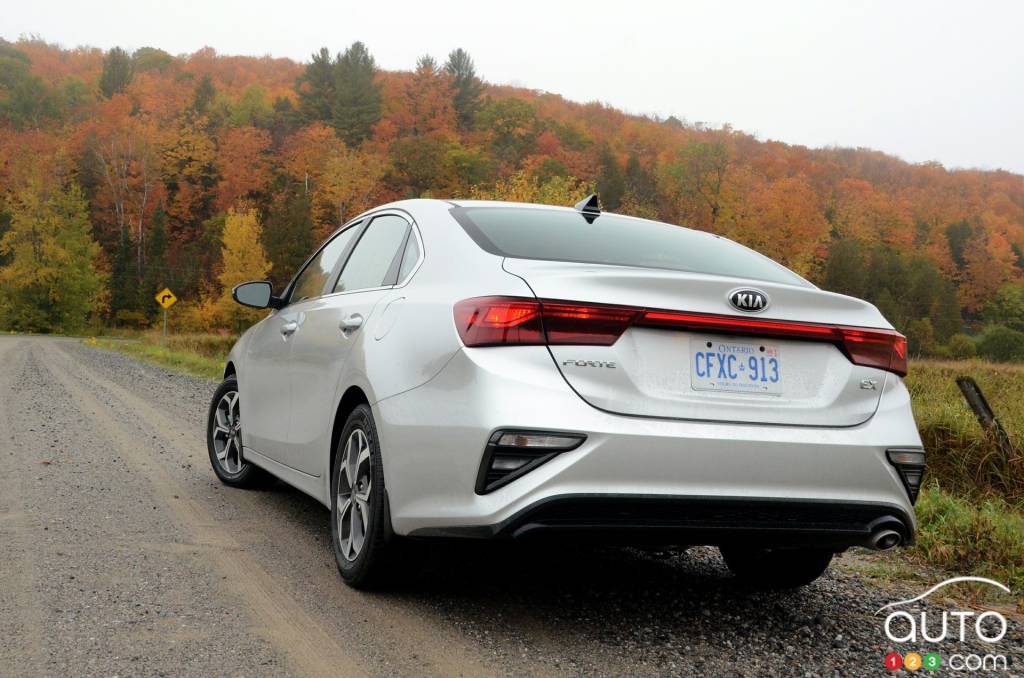 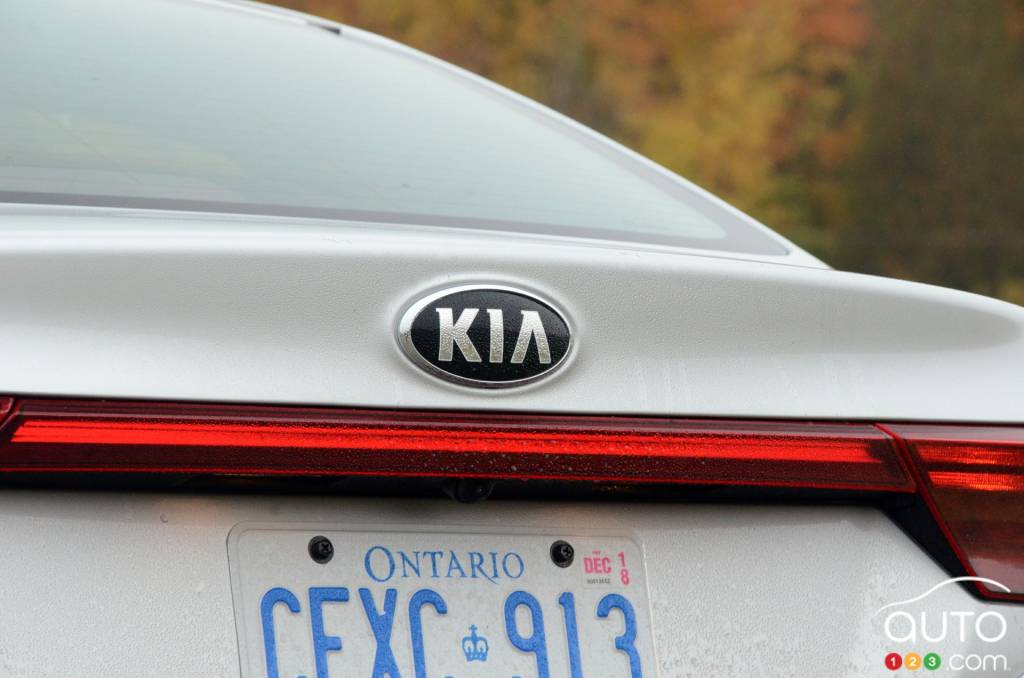 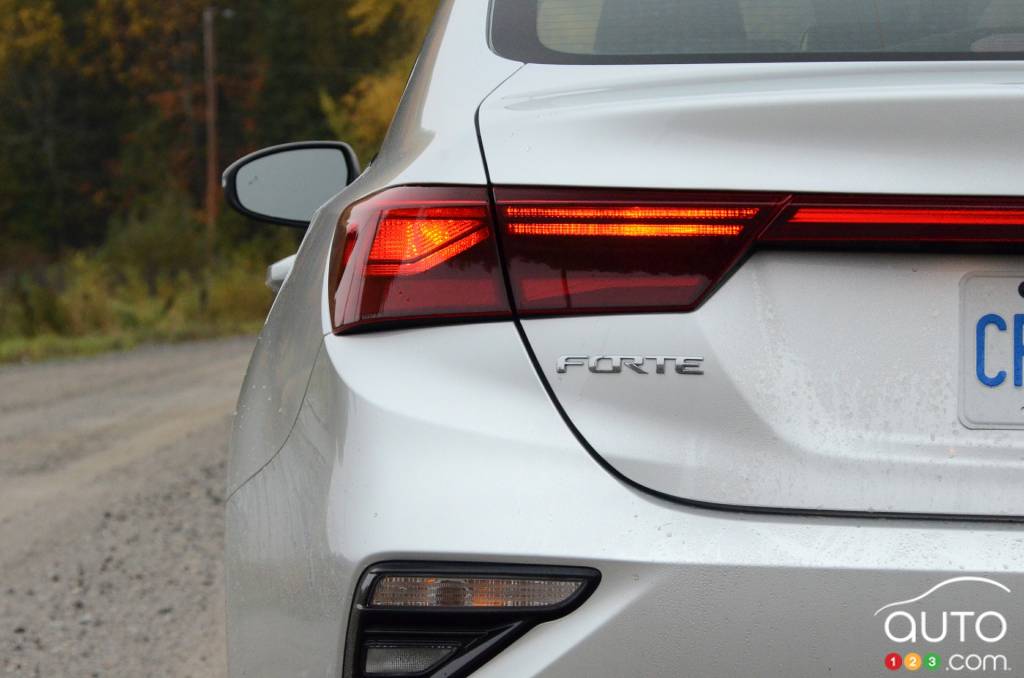 To give it the weapons to emerge victorious from the slugfest that is the compact sedan segment, Kia had to think big, or should we say small, and make of th...