The automaker is clear about its intentions: it wants to quickly ramp up the number of hybrid vehicles in its lineup. The immense popularity of the RAV4 makes it an ideal candidate to convert people to the joys of hybrid technology. It was important for Toyota to make the model’s hybrid version as accessible and attractive as possible, for example by including all-wheel-drive as standard equipment in all the hybrid-engine trims.

And just how many hybrid versions are there to choose from? Toyota Canada is offering four of them in all. The most affordable of them, the LE, starts at $32,090. With a bunch of added features and its still-reasonable $35,090 price point, the XLE edition could prove to be the most popular choice for consumers.

Next up the ladder is the RAV4 XSE starting at $38,390, which gets a distinctive design and is sportier in its road handling. As for the Hybrid Limited, the best-equipped and most expensive of the bunch, it starts at $42,090.

Also worth noting, since we’re talking about the hybrid RAV4, are the official fuel-consumption figures provided by Toyota Canada. And they’re pretty good: combined city/highway figure is 6.0L/100 km, which is a notable improvement over the 7.3L/100 km average posted by the outgoing RAV4.

So the RAV4 is accessible with its pricing and stingy with its fuel use. It’s also actually more dynamic in terms of the drive. All of that adds up to big sales numbers for the greener RAV4!

Our photo gallery of the 2019 RAV4 hybrid 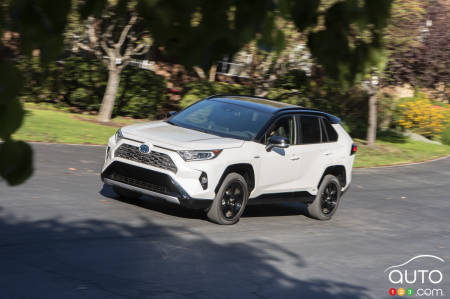