Subaru’s Canadian division has announced it will introduce its very first plug-in hybrid vehicle in our market by the end of next year. The Crosstrek PHEV will be possible because the Japanese automaker switched the model to its new Subaru Global Platform last year. This new architecture can accommodate hybrid and all-electric powertrains.

As a plug-in model, the Crosstrek PHEV will be able to be driven in purely electric mode. The downside is that the range in that mode will be just 27 km. Better than nothing, you might say, but doubling that capacity would have made it more practical.

For the rest, the vehicle will drive like a typical hybrid, in other words it will rely mainly on a combustion engine (in this case, a 2.0L 4-cylinder), working in conjunction with an electric motor (here a 8.8 kWh unit). This being a Subaru, the powertrain will also get a symmetrical all-wheel-drive system, which will instantly make the new plug-in hybrid the most winter-friendly vehicle of its type on the market. The powertrain will also include a CVT transmission. 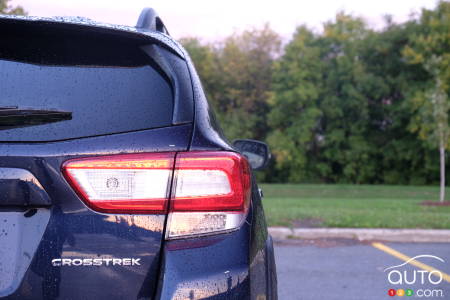 It will be interesting to compare this new Crosstrek with the all-wheel-drive Prius that Toyota is preparing to introduce. Incidentally, the Crosstrek’s system that uses two electric motors (one for startup and to regenerate the battery, the other to send power to the wheels) is borrowed from the Prime version of the Prius. The shorter all-electric range of the Crosstrek PHEV in comparison with that Toyota model is due, it seems, to its heavier weight.

The backdrop to all this, of course, is that we’re seeing the result of a second major collaboration between Toyota and Subaru, after the creation of the Toyota 86 and Subaru BRZ twin models.

“Our dealers and customers have asked for a vehicle like this and we listened. We’re excited to expand our well-rounded lineup with an alternative powertrain vehicle that offers the benefits of electrification without the hassle of range anxiety.”

The Crosstrek PHEV will make its debut at Canadian dealerships toward the end of 2019. We’ll have to wait for more details regarding the versions that will be offered to consumers in our market. In the U.S., the model will get a starting price of $34,995.

2020 Lincoln Corsair Powertrain to Come in a Third Flavour

The 2020 Lincoln Corsair that will replace the current MKC crossover will get a third powertrain in its product offering. Rumours have it that it will be of ...