As the 2020 Toronto International Auto Show kicked off today in the Queen City, the Automobile Journalists Association of Canada (AJAC) named the Mazda3 and the Jaguar I-Pace its Canadian Car and Utility Vehicle of the Year for 2020.

The win is the second-straight for Jaguar’s all-electric performance SUV, which last year became the first vehicle powered only by electricity to win an overall AJAC award. It beat out the Volvo XC40, Subaru Outback, Porsche Cayenne and Kia Telluride for the top honour. 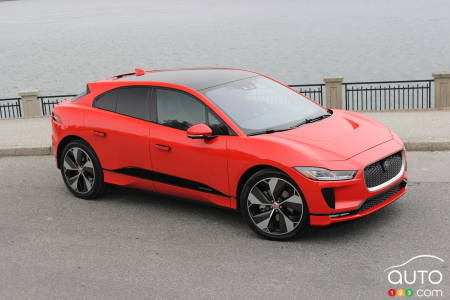 Cars that finished behind the Mazda3 this year include the Subaru Legacy, Mercedes-Benz A-Class, Toyota Supra and Porsche 911 Carrera.

You’ll recall that last month the AJAC named its category winners on opening day of the Montreal Auto Show. Today’s announcement marks the finish line (or almost) of a process that began several months back with an initial list of 51 vehicles, and that involved tabulating votes submitted by over 1,200 members of the association.

"These awards are AJAC's highest honour, and it's with the backing of our members' real-world assessment and depth of expertise that we declare the Mazda3 2020 Canadian Car of the Year and the Jaguar I-PACE 2020 Canadian Utility Vehicle of the Year."

Next month the AJAC will name its final two award winners for the year at the Vancouver International Auto Show. We’ll learn on March 25th the identities of the 2020 Canadian Green Car of the Year and Canadian Green Utility Vehicle of the Year.

The Automobile Journalists Association of Canada today announced the winners of its 2021 Canadian Car and Canadian Utility Vehicle of the Year awards. Congra...