The new C8-generation 2020 Chevrolet Corvette has been showered with praise since its official reveal in Jul of this year. Many have marveled at its spectacular shape, its bold and unique mid-engine layout and a level of performance that includes acceleration from 0-97 km/h in just 3 seconds. But there’s more to the car than that of course. We figured a closer look at its inner workings was worth the time.

Read our first drive review of the 2020 Chevrolet Corvette

Chevy’s engineers didn’t settle for modifying the outgoing C7 model by moving back the engine bringing a few additional tweaks. They went a heck of lot further than that. The new Corvette really is fully new, from its platform to the mechanics to the suspension elements.

Despite the C8’s impressive-looking spec sheet and the promise of exceptional performance, many purists took to the barricades on discovering that the engine Chevy had settled was the “small block” 6.2L overhead valve V8 engine. To these folks, the better choice would have been the inclusion of a DOHC engine with four valves per cylinder and even the presence of a turbocharger or compressor.

Tradition
Despite the clamouring from some corners, Chevrolet decided to stick to tradition. Unless my memory fails me, every Corvette ever produced has been powered by an overhead-valve V8. There was that engine developed by Lotus and built by Mercury Marine, which never really attained success, but for the rest, the focus has always been on having on board a V8 made in the purest North American tradition.

Incidentally, there have been some raised eyebrows, especially among Europeans, on hearing talk of a 6.2L small-block engine – this seems to them a contradiction. In fact, this denomination is used due to the relatively compact dimensions of the engine given the number of cylinders.

Now, respecting tradition doesn’t mean Chevrolet didn’t install in the C8 a highly evolved powertrain. The company’s engineers reviewed and modified every component of the engine. The bloc is stiffer and lighter and uses direct injection, and the electronic management system means cylinders can be deactivated in certain situations.

By the by, know that it’s possible to option in an Appearance version of the engine, in which carbon fibre applications are used. This can seem trivial, but since the engine is on display of a sort thanks to a window on the back, showing it off properly probably matters to some buyers. Besides, all of the exterior components of the engine, down to the exhaust manifold, were designed with in mind not just function but form. 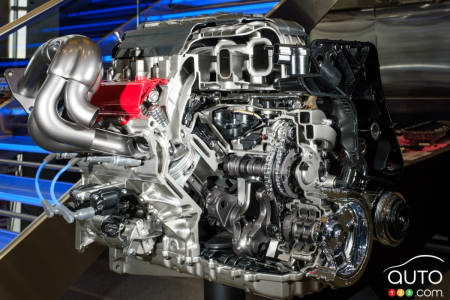 The engine is kept lubricated via a dry sump and the lubrication system was designed to oil flow, even when driving a high speeds on a track. And for those interested in the finer details, the lubricant used is Dexos 0W40 synthetic oil.

Speed changes are done automatically or by using the paddles shifters on the 8-speed dual-clutch transmission. The Tremec automatic unit was specifically developed to manage the power and torque of this engine and ensure super-quick shifting. Unfortunately for some (those purists again), there’s no longer a manual gearbox in the product offering.

Stiffness in the middle
The C7 version of the Corvette has a frame offering excellent rigidity, but it’s necessarily well-suited to a mid-engine configuration. Chief engineer Tadge Juechter and his team opted therefore for a very stiff longitudinal central beam that allows for the suspension elements to be anchored rigidly all while creating a welcoming cradle for the engine, which here sits very low. The result, a very low centre of gravity.

I should mention that his name notwithstanding, Tadge Juechter is no German engineering wiz poached from Porsche, as some have claimed; he was born in the U.S., studied in Michigan and spent his entire career developing Corvettes of the last few generations.

One of the advantages of the C8’s configuration, and will surely be appreciated by owners, is the ease with which drivers can get into and out of it. In fact the body frame elements don’t have to be very big since stiffness is assured by the central beam. As a result the new Corvette is actually very pleasant to use on a daily basis.

A good look at the sturdy character of the chassis and aluminum-suspension elements tells you that this is clearly a very stiff vehicle body. In addition, the parts are built to be at once rigid and lightweight. This configuration is so efficient, moreover, that very few modifications of the chassis were needed to produce a convertible version – it will hit the market shortly after the coupe. The latter, meanwhile, features a removable roof panel that a simple and effective system slides back into the back storage space.

Braking is entrusted to Brembo 4-piston units. Since the discs are of steel, there’s no need to warm them up before you get proper braking power like you do with ceramic discs.

Balance and performance
Chevrolet may well introduce a much more powerful version fitted with a turbo or compressed engine, but for the moment, the 495 hp of this V8 are largely sufficient to deliver exalting performance; it takes but 3 seconds, for example, to speed from a stop to 97 km/h.

But the key element for those who will drive it regularly is not brute acceleration, but rather the general balance of the cars and the comfort it offers, no matter which drive mode you choose. To achieve this, the front and rear suspensions are double wishbone and linked to mono tube shocks or to an optional magnetic management system.

From having driven the car, I can attest to its impressive on-road behaviour. The car can generate over 1G on corners, while the Michelin Pilot Sport AS 245/35 ZR19 tires in front and 305/30ZR20 tires in back help deliver excellent grip when cornering, without sacrificing comfort.

What’s more, for a mid-engined vehicle, sound insulation is remarkable.

A car for the ages?
The new-generation Corvette is not without its faults. It’s gotten some criticism for its shape, for the layout of certain commands, for the overhead valve engine, for the absence of a manual gearbox. But the C8 is yet so new that these first impressions are just that, first impressions. Over time and as people get to drive the production version, it will be easier to come to a general consensus regarding its merits.

Despite the quibbles, the mechanical configuration of the new ‘Vette, its traditional but very effective engine and its impressive comportment on the road, not to mention the surprisingly livable and comfortable interior, combine together to make of the 2020 Chevrolet Corvette a car for the ages.

The wait is finally over. The life of the Corvette as a mid-engine speedster starts now, as Chevrolet officially unveils the C8 generation of the model at a ...