Las Vegas, NV - The word “revolutionary” and its derivatives should not be used lightly, though it does get tossed around quite regularly – the “revolutionary” hair growth product on late-nite TV, for example. “The Revolution” wrestling group? Please. The “Dance Dance Revolution” arcade game? Fun, but not revolutionary.

Revolutions should change things, make you think, upend existing norms - see The Industrial Revolution. They should change the way we think about the keystones we’d always taken for granted.

Like the idea an American sports car should always have the engine mounted up front, with the motive force coming from the back. So when the makers of one of the world’s most popular sports cars kick that assumption straight to the curb, people tend to stand up and take notice. Enter the mid-engined, 2020 Chevrolet Corvette Stingray, and it is revolutionary. 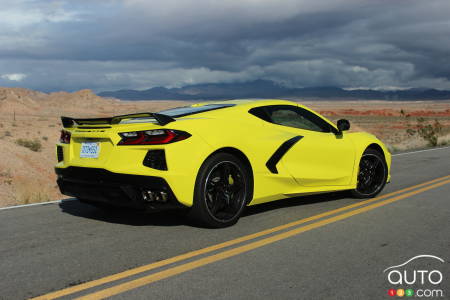 Of course, the idea of a mid-engined ‘Vette has been bandied about for quite some time - after all, a mid-engine layout that delivers 50-50 weight distribution front-to-back is a good way to ensure you get the most out of your chassis. It’s why most major racing disciplines use mid-engined cars, and it’s why pretty much every supercar/ hypercar that comes out these days gets that alignment. It just works. It just never happened with the Corvette, though. Until now.

Maybe that’s because the Corvette has always kind of been a bit of a blue-collar sportster. While the lightweight body and powerful V8 motors have helped it be successful both on the road and track, it still had that workaday feel about it. The interiors were long a little rough around the edges and while the last few generations have borrowed infotainment tech from the rest of the Chevrolet lineup, it never seemed the proper fit for the Corvette.

All that has changed in 2020 as Chevrolet has decided the Corvette is more than a car for the gold-chained, leather-jacketed crowd. The C8 is here to do win over the Balenciaga sneaker- and Louis Vuitton fanny pack-wearers of the Porsche 911 crowd. It’s got younger buyers in mind, so it’s taken a dip in the fountain of youth. 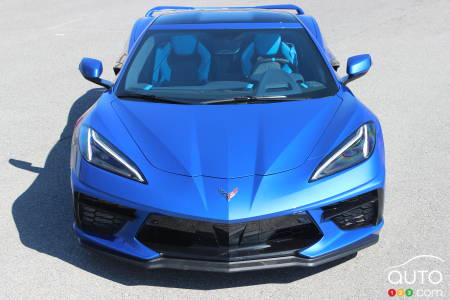 It still has that pushrod V8, though. It measures 6.2L and is good for 495 hp and 465 lb-ft, fed through an 8-speed paddle-operated dual-clutch transmission with paddles wired directly to the transmission for even faster shift response. More on this in a minute.

The look
To start, though, just look at it. Seen dead on and low from the front, there are allusions to the previous-generation C7, namely in the shape of the headlights and angle of the nose. But raise your line of sight a little and you see that the leading edge of the trunk cover (a trunk – one of two - now fills the void left by the engine) is not a straight line, but a jagged one à la Lamborghini Aventador or Lockheed F-117 jet fighter.

It just gets crazier from there. Slashes and cuts appear all over the bodywork, and the contrast-colour sideblades behind the rear cooling ducts flow well with their surroundings. 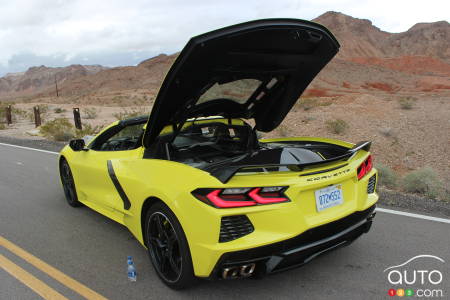 Of course the rear is where things have really changed. For one, it’s four inches wider in order to accommodate the engine and keep proper airflow around the body. The spoiler that comes as standard on cars equipped with the Z51 package (which includes electronic limited slip, enlarged brakes, track-tuned suspension, better cooling, Michelin Pilot Sport 4S tires) combines with raised segments either side of the engine cover to keep that air moving and provide downforce.

Little of what you see is there just for styling’s sake. Rather it’s functional, there to make this the best-handling Corvette we’ve ever seen. It is spectacular in every way, once you accept that the long hood and cab-rearward profile are a thing of the past for the Corvette.

The interior
Inside, the Corvette has reached another level when it comes to interior fit and finish. The materials are mostly high grade and bereft of cheap plastic. Everything you see is real, like the aluminum plating around the transmission buttons (yes; the transmission has become button-activated), carbon fibre on the seatbacks and leather on the seats. Same goes for the spectacular metallic Bose speaker grilles. 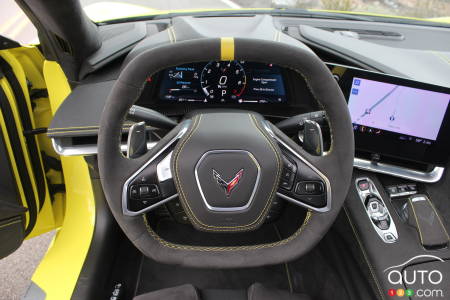 Speaking of which, the audio is controlled almost completely through a touchscreen now. There’s a volume knob, but that’s it. That will ruffle a few feathers, but the 8-inch infotainment display is responsive and crisp. It’s matched with a 12-inch digital gauge cluster that looks modern and reduces clutter.

Of course, clutter reduction has its limits, as evidenced by the centre console and its band of 14 traditional buttons and three toggle switches. All climate controls sit here, and while I like traditional buttons most of the time, this is a busy way of doing it, compounded by the fact that errant elbows turned on seat cooling and warming systems more than once during our drive.

There’s a reason for it, however. The goal of these climate controls is to lower the dash as much as possible, which works in concert with the short hood and thin A pillars to provide the best view out. The flat top of the oddly-shaped wheel doesn’t cut into your line of sight, while the partially squared-off opening between the rim and spokes means a better view of the gauge cluster. 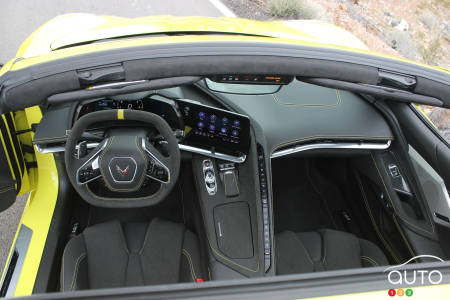 You really get the sense there’s very little car ahead of you, like you’re in a sports prototype racer from the ‘70s and the pedals actually sit ahead of the front axle. They don’t, of course, but they sure feel like they do. Turn-in is quicker for it, too.

The seating position is right on and very cockpit-like in its snugness, and lets you focus more at the task at hand, while the lack of a traditional centre stack means no sharp corners at its base to smack your knee on.

On the road
The snug environs fit well with the way the Stingray acts on the road. It should come as little surprise that acceleration – especially when using launch control (activate track mode, hold the brake, mash the throttle, go) is properly brisk. You don’t want to be moving all around the cockpit as you put the car through its paces, the chunky, Alcantara suede-covered wheel firmly gripped. There are two levels of seats, and the more aggressive GT2 versions will not only squeeze your hips, they will suffocate them. Both my drive partner and myself – two very different body types – found the bolstering to be too much, kind of like the fixed-back carbon seats offered on Porsches. You can adjust the rib bolsters on the seatback but not on the bottom cushion. I would stick with the GT1 base seat, though it’s a shame that if you want the top-spec 3LT trim, the GT2s are standard kit. Both seat types, meanwhile, get more travel than previous so it should be easier to find a comfortable seating position.

While acceleration is brisk, don’t expect it to launch like a rocket. There are fewer than 500 horses here along with rear-wheel drive (not to mention a 200-lb surplus over the last gen, depending on spec), so I wouldn’t say that the Stingray’s off-the-line roar is its defining quality.

Everything that happens after that, however, is worth the extra 200 lb and then some. As you sit low in that cockpit, you expect the Stingray to respond instantaneously to your steering, throttle and shift inputs and it does all that. In fact, you’re looking at the same shift speeds of a Porsche PDK transmission, which is what Chevrolet and Tremec used to benchmark the car’s 8-speed. It is incredibly fast, and while I’ll always have a soft sport for a proper stick-shift, I’m OK with its absence here. 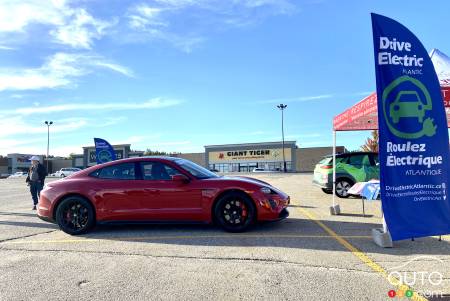 My guess is most buyers will be more than OK with the way the C8 handles. Cliché alert: this is a car that will make average drivers feel like proper stars - even more so with the optional magnetic dampers. Those run an additional $2,180, though, and they’re only available with the $5,600 Z51 package.

There is so much turn-in and grip here (especially if you’re running the extra-sticky tires that come with the Z51 package) that you have to work hard to get it un-stuck. There are various levels of traction control intervention, of course, and the more aggressive settings leave a nice amount of slip to the rear end, only stepping in when you’re really about to go butt-over-teakettle.

Fully disengaging TCS proved a task beyond my tech skill set, however. I suggest just leaving it in Track mode, which worked fine for me both on the autocross course and open road course at Spring Mountain Motorsports Ranch. If it’s OK on the track, it’s more than fine for the open road. The Corvette also features a Z-Mode that, like BMW’s M cars, stores your powertrain settings and can access them with a press of a button (it reverts to standard every time you turn off the engine).

As much as I liked the car on the track and on the flowing roads of the Valley of Fire state park outside Las Vegas, I was impressed by how well it acted in town. At one point, while stuck in traffic on the strip, I kind of forgot I was in a low-slung sports car. The view out was good, the climate controls were working a treat and the video rear-view mirror, helpful because the engine now blocks much of the rear view, provided a nearly-360-degree view out. I had also switched to a car with more-relaxed GT1 seats at this point. 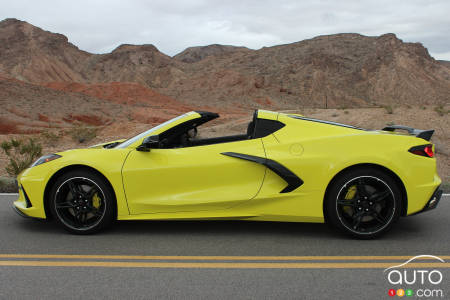 This brings me to the Corvette’s greatest strength, but also potentially its greatest weakness. As mentioned, the mid-engined format has traditionally been the purview of race cars and supercars. But the 2020 Corvette road car is not a supercar. It is a sports car, as denoted by the power it makes and its mannerisms when not pushed to the limit; but it doesn’t feel quite as fast as it looks and the powertrain isn’t able to perform to the level of what the chassis hints at.

Now, when the inevitable Z06 and ZR1 versions show up that could very well change, but for now the C8 is not quite there yet in the power sense. 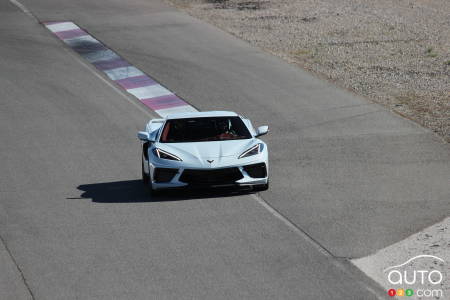 The pricing
Of course, when you have a base MSRP of $67,898 before taxes, it really is a performance bargain. The 911, which Chevrolet spent so much time benchmarking for the C8, starts at over $110,000. The Audi R8 and Mercedes-AMG GT? Forget about it. They aren’t even close in the pricing sense, yet aren’t that far ahead performance-wise.

The new Corvette is not perfect – no car is – but it rates a 9/10, and a less-stingy hack might add .5 to that. The C8 has brought mid-engine motoring to the masses like few cars before it. This is quite a car. 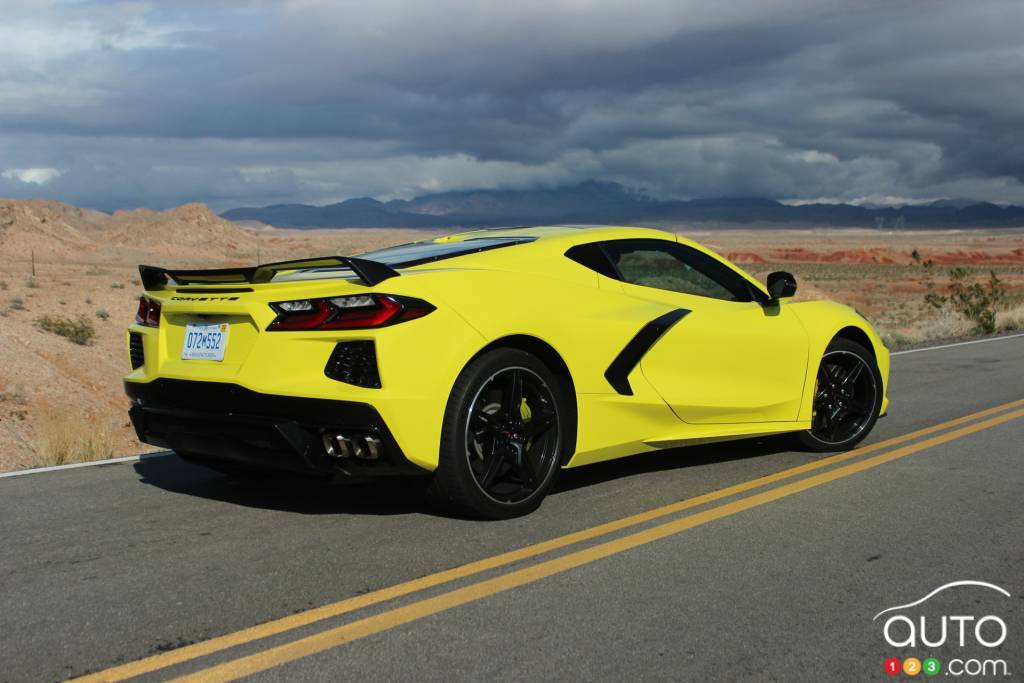 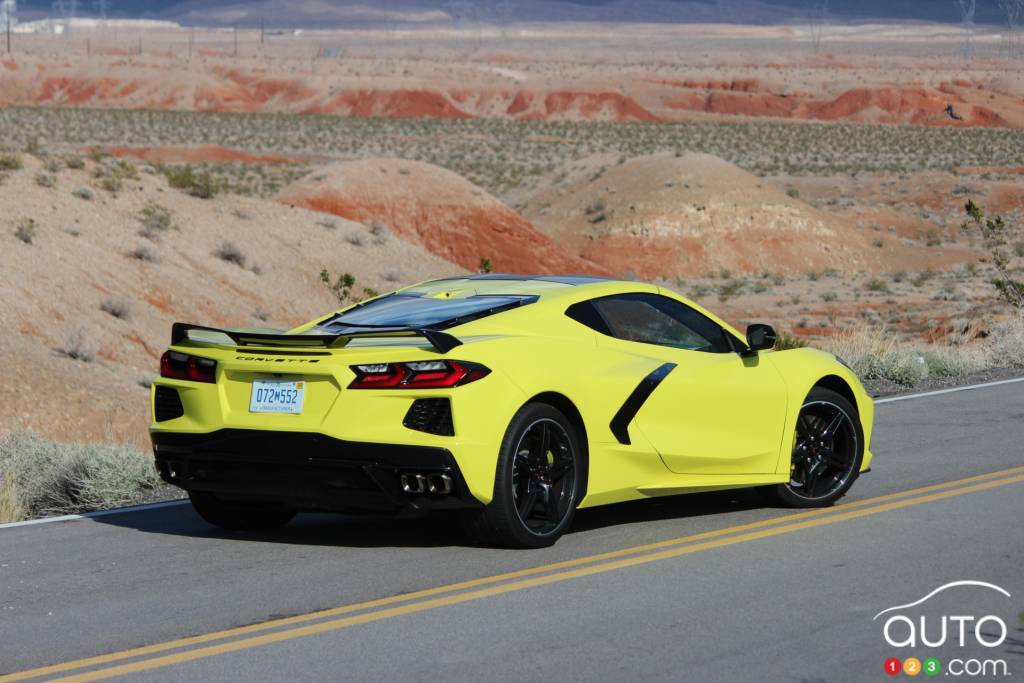 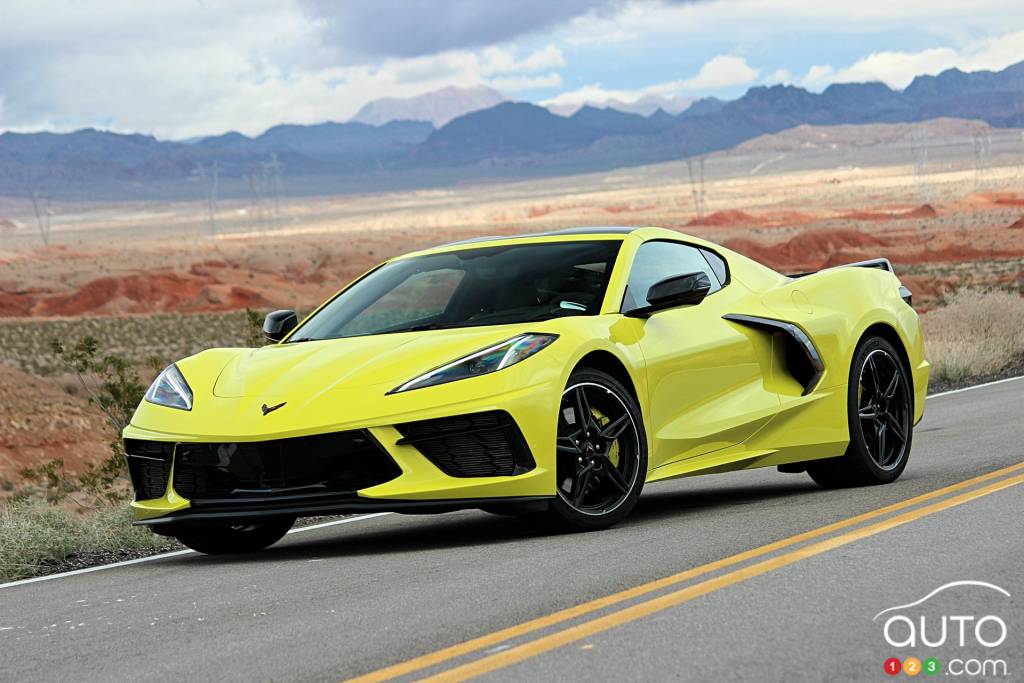 The unveiling presentation for the 2020 Chevrolet Corvette at the Montreal Auto Show was one of the highlights of media day, as the jostling to get in close ...