Los Angeles, CA – Porsche chose the Los Angeles International Auto Show as the stage for the world debut of the 2020 Porsche 911 (992). While you’d think the Frankfurt or Geneva shows would be the more appropriate choices considering their proximity to Porsche HQ in Stuttgart, North America makes up one-third of all 911 sales, and a big chunk of that figure is done right here in California. So, the LA show it was.

“Porsche is famous for its timeless design, and the new 911 proves it again. It has clear links to the original but at the same time, it hits the spirit of the time.”

Just in case we’d forgotten what the old 911 looked like, Porsche brought along an example of every generation, including the oldest 911 model currently held in Porsche’s collection, a red 1964 coupe.

The most notable feature of this mantra is seen on the hood, which gets a pair of none-too-subtle creases that recall items used on the original 911. The wheels – 21-inch at the back, 20-inch at the front - are also designed as a modern take on the famous Fuchs alloys that have graced 911s for decades. 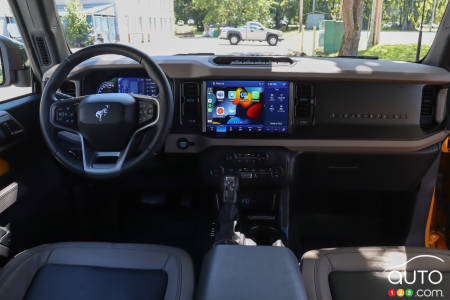 Overall, while the car is technically bigger, I have to say that in person, what Porsche says rings true; somehow, this car looks more compact and a little more classic than it has in previous years, years it’s spent getting bigger, bigger and bigger still.

It’s an impressive feat, designing a new 911 to look like a classic – but not too classic – especially when the same basic design has changed little for over 50 years. Indeed, that fact prompted presenter and race driver Mark Webber to ask designer Michael Mauer “How the hell do you redesign a 911?”

It was a question designer Mauer was only too happy to answer. “This is really one of the hardest jobs you can have in the car industry,” he said. “Designing an icon – the icon – of the car industry is a pretty hard job but looking at the car so far, I’m pretty happy.”

“We cleaned the surfaces and straightened the lines,” said Mauer. It’s all in the name of making the 911 both more muscular and more compact. 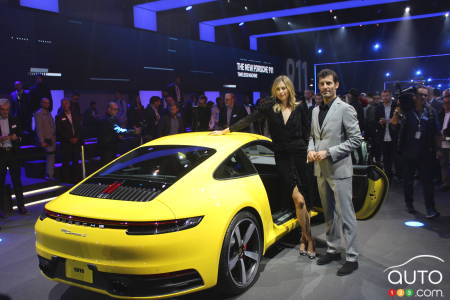 The interior
One of the big changes on the inside of the car is a new-to-the-911 infotainment system complete with 10.9-inch touchscreen display – part of a new “Porsche Advanced Cockpit” -- that Porsche hopes will appeal to a younger demographic that likes its cars connected as well as quick. That’s the newfangled stuff.

As far as more classic interior bits are concerned, one need look no further than the gauge cluster. It maintains the horizontal alignment – bigger gauges in the middle, smaller gauges on the outside – that it always has, but kicks it up a notch in the retro department by styling the main tach to recall the item originally seen on the 911.

The way it’s surrounded either side by digital gauges may have it looking out of place at first, but once you take more time to study it, you can see what Porsche was going for. The dash, meanwhile, is more upright with straighter lines, just like 911s of old.

That’s really where the nods to Porsches of old end, however, as the centre console is rife with modern piano black paint (oh, I can only imagine the dust and fingerprint accumulation), and a stubby gear selector that makes the t-bar item on the old Ferrari F355 look almost manly. It’s finished in a pretty neat-o black aluminum on the show car but I’m sure that can be switched for a more traditional, silver finish if need be.

Oh, and eagle-eyed Porschephiles will note the existence of an actual cupholder mounted below the shift lever, meaning we no longer have to put up with the spindly, ugly and pretty much useless items that used to telescope out of the dash ahead of the front passenger. 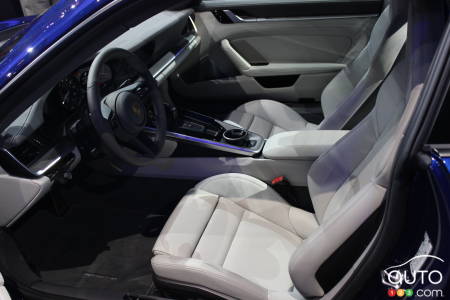 On-board entertainment tech is all well and good, but these days, even at this elite sport car level, cars need to be safe, too. In that light, Porsche has developed a system that can actually detect a wet road beneath the wheels, and adjust traction control intervention to suit the situation. That’s some pretty smart stuff, and while the tech is available on both RWD 2S and AWD 4S models, you’d have to think that the 2S is really where you’re going to feel the difference.

More horses
Of course, this being a Porsche model quickness is still the order of the day; the first models to arrive in showroom in fall of next year will be the Carrera 2S and 4S, both making 443 hp, a 23 hp increase on last year’s model, and as powerful as last gen’s GTS model.

Also helping in the speed department is the use of aluminum for every body panel except the front and rear bumpers. Combined with a new 8-speed PDK dual-clutch transmission, Porsche is claiming a 0-100 km/h sprint of 3.5 seconds for the 2S, 3.4 for the 4S and 3.3 and 3.2 seconds, respectively, when equipped with the optional Sport Chrono Package, on to a top speed of 191 mph. That’s getting darn close to the territory inhabited by the current 911 Turbo.

Do not fear, manual lovers; a proper three-pedal set-up will arrive just after this one, likely once Porsche releases the non-S models of the Carrera 4 and 2. New injection technology, meanwhile, helps cut down on emissions and increase fuel economy. According to Porsche, its new 911 is 70% more powerful than it was in the ‘80s, and 30% more economical.

Both muscular and compact, new and classic; the 2020 911 may wear many hats, but you know it’s going to wear them with style and panache. 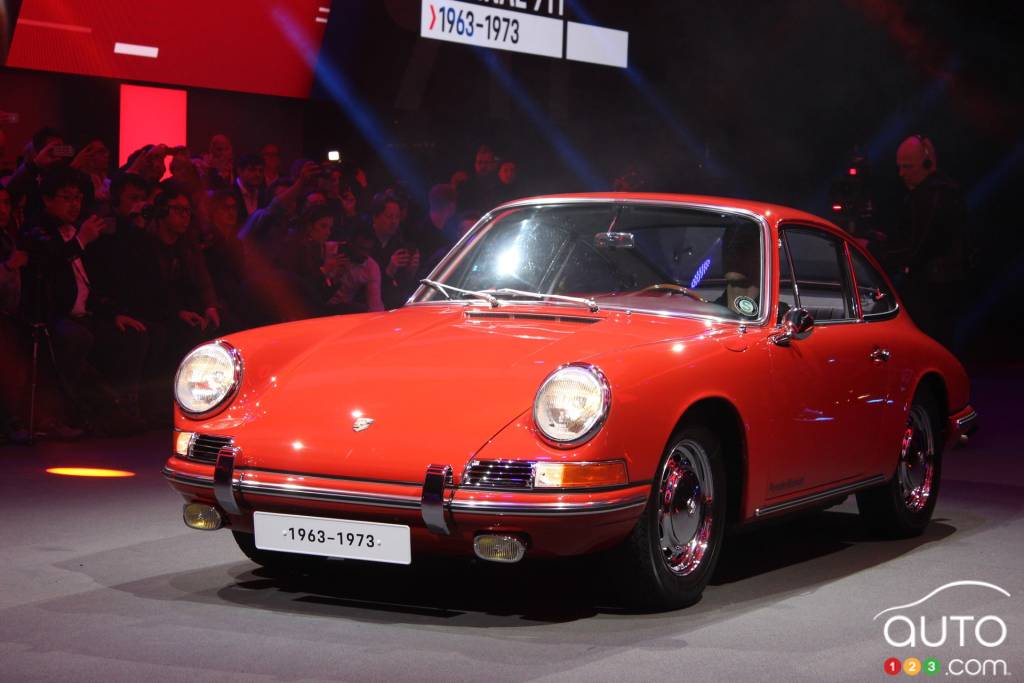 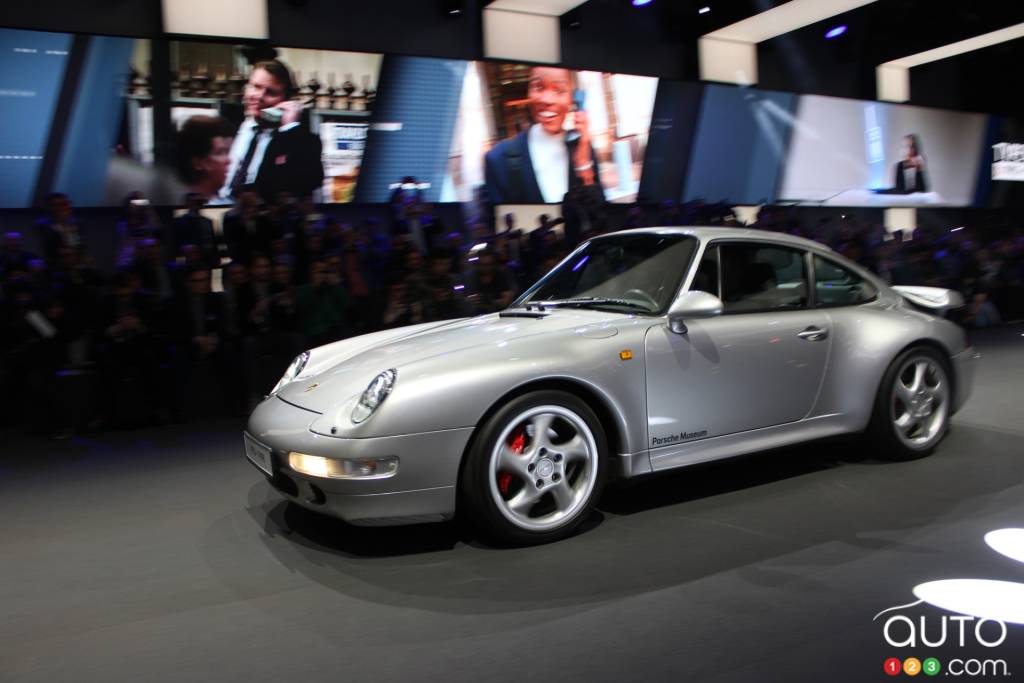 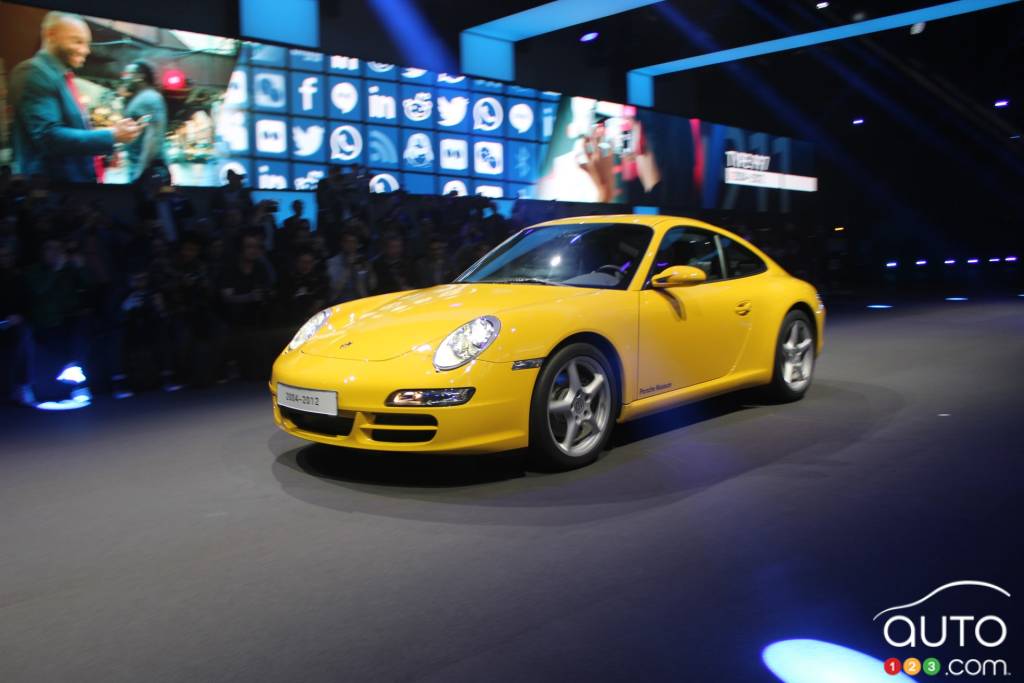 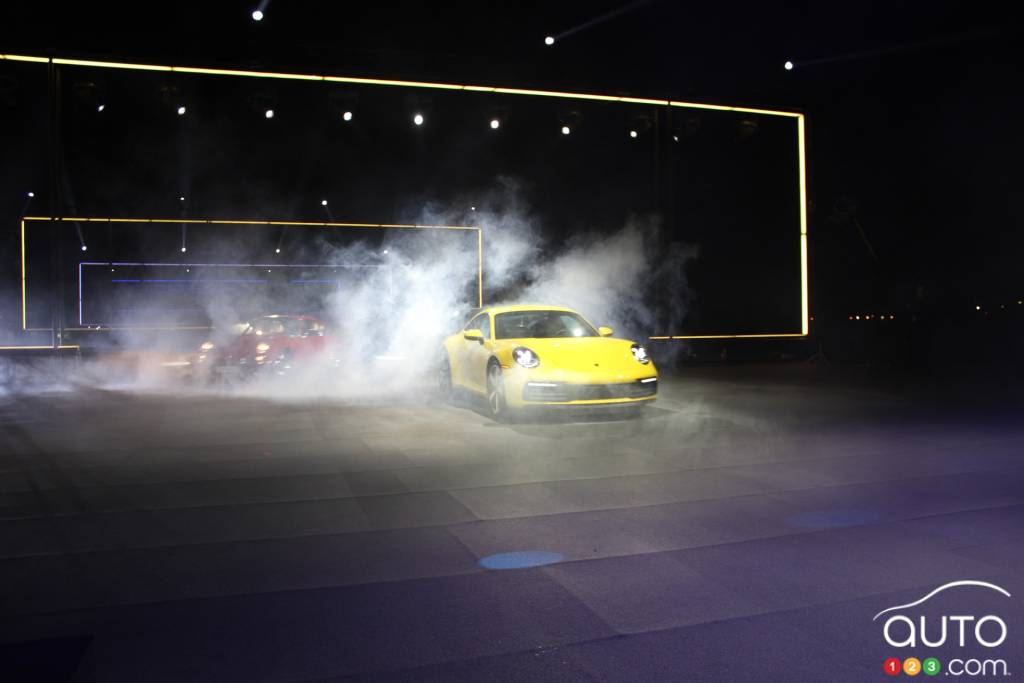 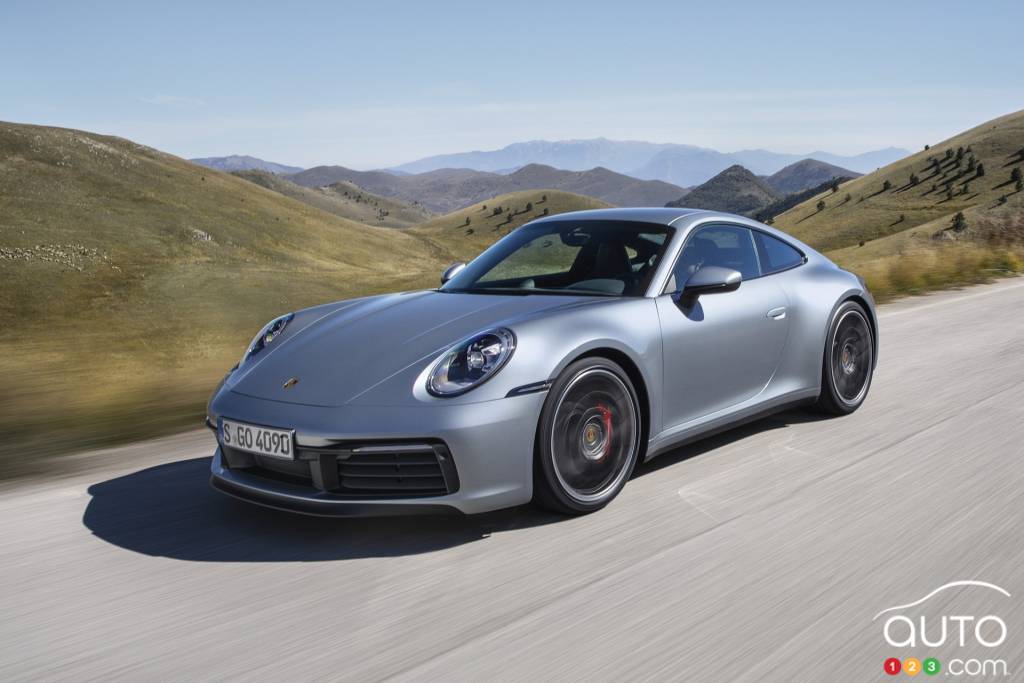 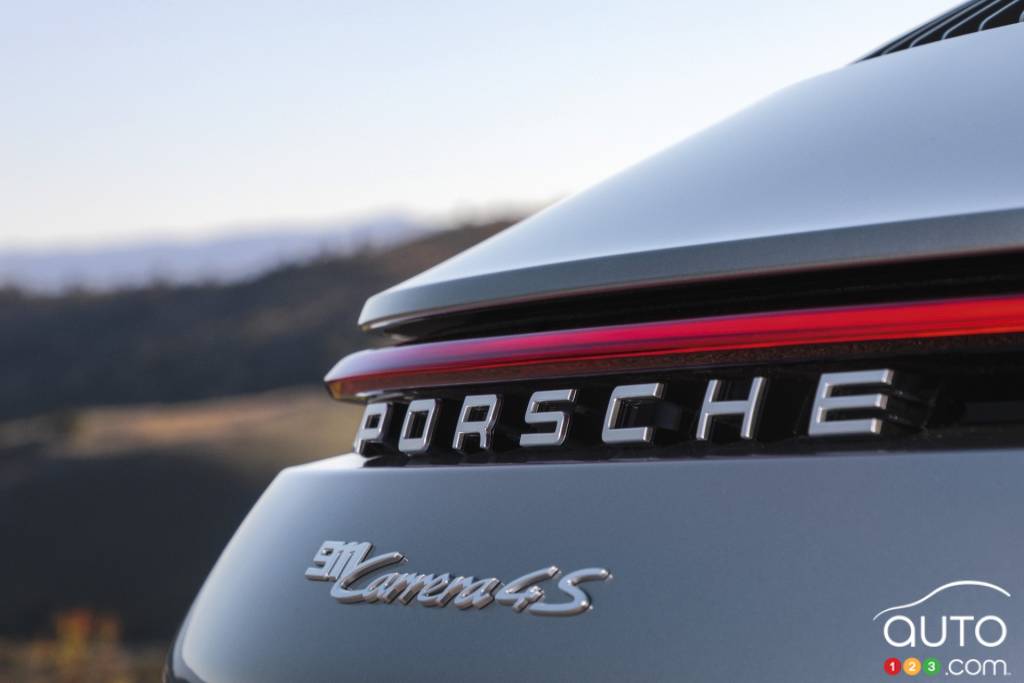 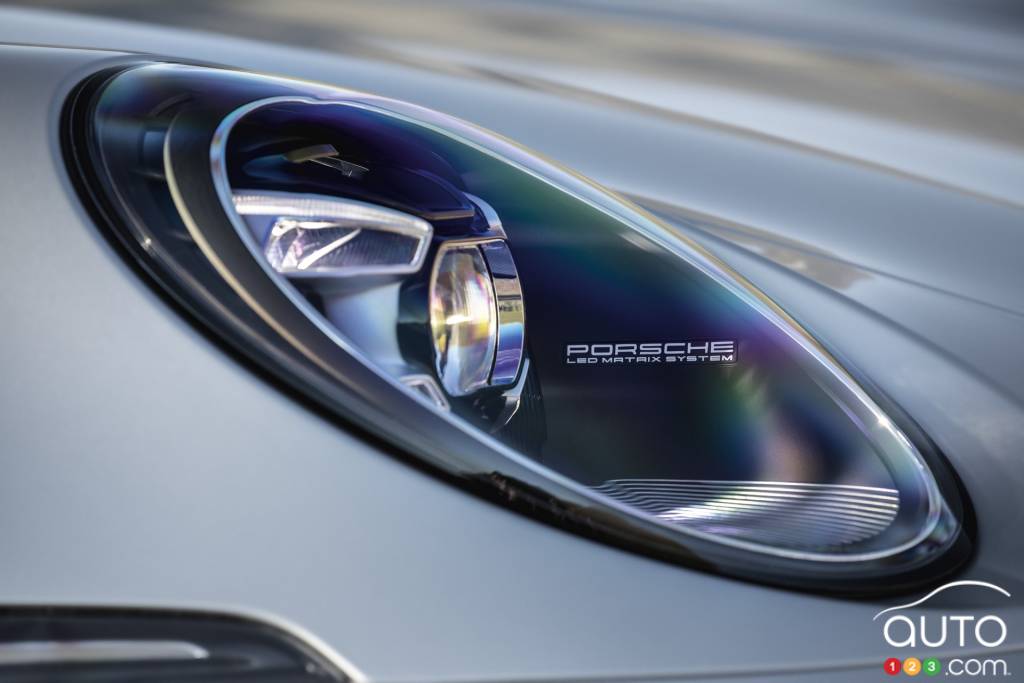 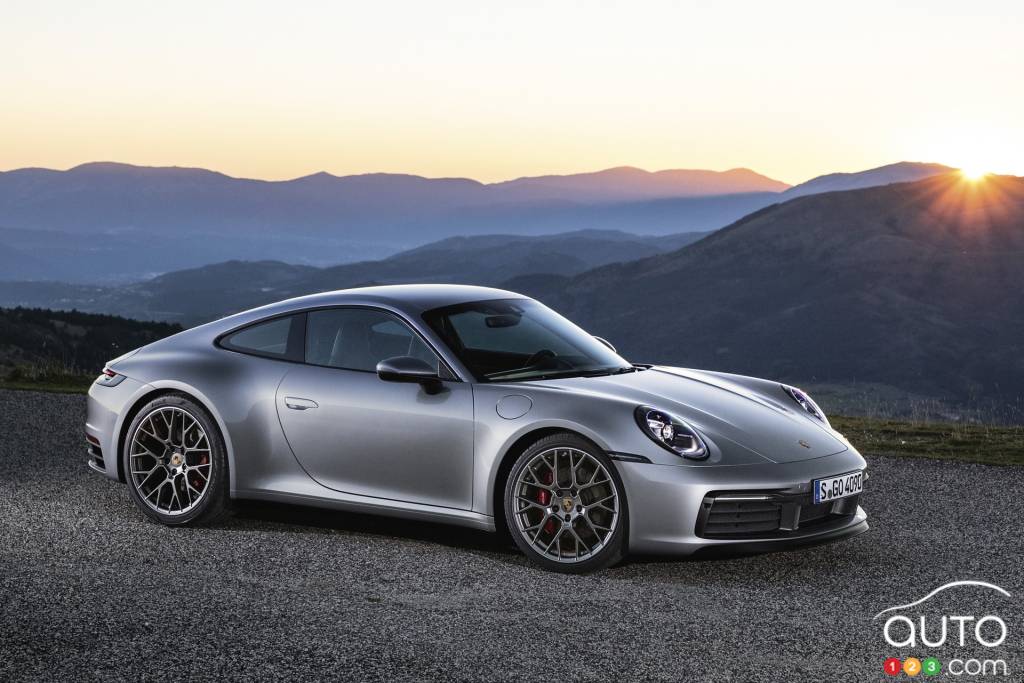 Porsche has confirmed that the new 8th-generation 911 will be unveiled next week at the Los Angeles Auto Show. While the model represents more of an evolutio...