The first 2020 Toyota Supra to come off the assembly line had a specific destination: the Barrett-Jackson Auction. The event, held in Scottsdale, Arizona, serves as the kick-off for January sales by the auction house.

Once again this year, a number of exceptional vehicles were put up for bidding; one of them was the new Supra, and it fetched a winning bid of $2.1 million USD.

Sounds crazy for a car that will retail for between $60,000 and $65,000 CAD when it’s made available. However, it should be noted that the proceeds from the sale of this “first edition” will be handed over to two charities: the American Heart Association and the Bob Woodruff foundation. The latter was established to provide aid to veterans and their families. As it happens, no one involved expected the bidding to climb anywhere near as high as it ultimately did. The car, which debuted at the Detroit auto show and has just made its Canadian debut at the Montreal show, is certainly attractive, but it will never be worth that price. The exclusive first Supra was decked for the occasion in a matte grey paint finish and a red interior, along with red side-mirrors and matte black alloy wheels. The car’s engine cover also features Toyota boss Akio Toyoda’s signature.

That’s not all the winning bidder will get for his trouble. Toyota is throwing in a VIP on-track experience and two tickets to the Toyota Owners 400, a NASCAR series race held in Richmond, Virginia. The buyer will also have the chance to drive the pace car at that event, and do a few hot laps of the circuit with former driver Michael Waltrip. 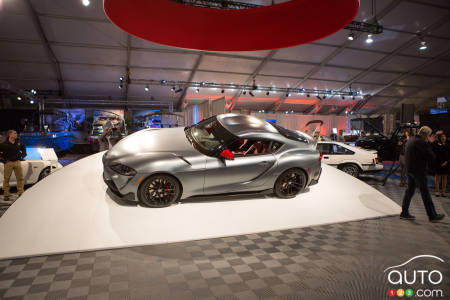 Barrett-Jackson has put up such items for sale in the past. In 2016, for example, the first 2017 Acura NSX to be produced was auctioned off, with the winning bid being $1.2 million. This year, at the same event as the Supra sale, the first Shelby Mustang GT500 was sold for a bid of $1.1 million.

All of it for a good cause.