The redesigned Fiat 500 was presented yesterday at an event in Milan, Italy. Production of the electric-powered next-gen 500 will begin at the FCA (Fiat Chrysler Automobiles) Mirafiori plant in Turin later this year. Deliveries for the European market are scheduled for early 2021. At the moment, it’s not known whether the vehicle will make its way to the North American market. Recall that the previous generation was pulled from our market at the end of 2019.

The new 500 is similar to the one that left us, but it has a new, slightly larger platform. The new model is 2.4 inches longer and 2.4 inches wider than before, and the wheelbase has also been lengthened by 0.8 inches. So far, the new 500 has only been shown in a convertible configuration.

A 42-kWh lithium-ion battery sits in the floor and offers a range of about 320 km based on the more-generous European cycle. This should translate roughly into a range of about 250 km according to North American measurement standards - which would put the model at a competitive disadvantage in our market.

The battery can be charged with a capacity of 85 kW, which will allow 80% of the charge to be recovered in around 35 minutes, according to Fiat. The company didn’t specify the total output of its new 500, but did mention it can do the 0-100 km/h trick in 9 seconds. More realistically, given this is an urban car through and through, owners can expect 0-50 km/h acceleration in 3.1 seconds.

Inside, the interior is sleeker and roomier than before, helped by the fact that the transmission and exhaust system are no longer present. For example, the new 500 has a large dashboard underneath which is a storage area where the gear selector used to be located. The instrument cluster features a 7-inch screen while a 10.25-inch touchscreen serves as an information and entertainment centre in the middle of the dashboard. 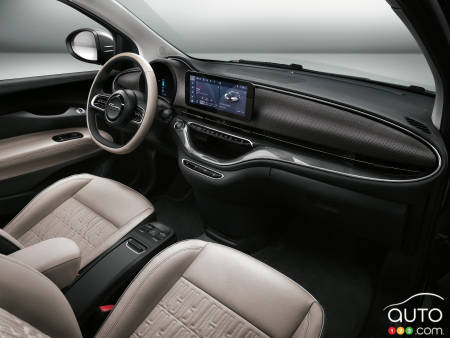 For the rest, the question that remains is whether the model will ever reach us. The Fiat name is, if not mud, at least muddied in North America, but with an electric model, who knows, the lustre could be restored.