Maybe we should just declare February Official Month of the Rumour. The latest in a long line of unconfirmed bits of news comes courtesy of Japanese website Best Cars, and it’s a rumour that’s spreading quickly across the internet.

The website reports, based on unnamed sources, that Lexus will make use of a BMW engine in its next IS, scheduled for the 2012 model-year.

At first glance this seems pretty far-fetched, given that the engine in question is in use in the BMW 3 Series, a direct rival of the IS. On the other hand, the association between the German and Japanese automakers does make this a credible possibility.

Just one of several engines
We should clarify that the BMW unit wouldn’t be the only engine to be available with the next IS.
Three other units would be part of the product offering.

The BMW engine in question is a 3.0L inline-6 that delivers 382 hp to the 3 Series M340i model as well as to the M40i version of the new BMW Z4. The same unit sits under the hood of the Toyota Supra, to which it delivers 335 hp.

As for those other engines that will power the IS, Best Cars mentions 2.0L and 2.4L 4-cylinder turbos. In some markets a hybrid version will also be offered; that powertrain will include a 2.5L 4-cylinder engine. At the top of the pecking order, the Lexus IS F variant will run on the twin-turbo V6 that currently powers the LS model. That unit will have an output of around 415 hp working with a 10-speed automatic transmission. 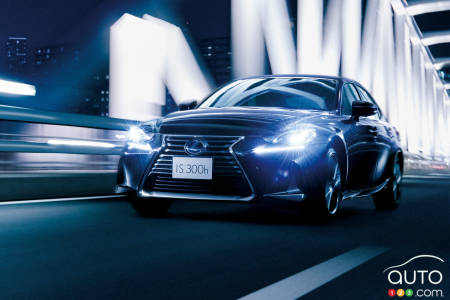 More lightweight
The reports about the next IS also make mention of a format that will stay largely unchanged but will be substantially lighter. There’s no precise data about this and several different figures have been bandied about, possibly to do with different versions of the model. An IS 250 with rear-wheel drive, for example, is lighter than an IS 350 operating with an all-wheel drive system. The takeaway, though, is that the next IS will be lighter and nimbler than before.

The new IS will sit on the manufacturer’s TNGA (Toyota New Global Architecture) platform, which has already proven itself underpinning the Prius, Corolla and Camry from Toyota.

The next Lexus IS is expected in the second half of 2020 as a 2021 model. If the automaker follows its usual pattern, the IS F will follow a year later. We’ll have to wait and see if the RC coupe gets a makeover at the same time.

Consult our listing of pre-owned Lexus IS cars available in your region of Canada.

A V8 Engine for the Regular Version of the Lexus IS in 2021?

Rumour has it that a V8 engine will be offered with the regular version of the Lexus IS in 2021. The offer could be short-lived, however, as still other spec...