As we mentioned in introducing the 2021 Nissan Kicks, many changes were expected at Nissan in 2021, including the arrival of new models and the revisions of other existing ones. But here’s one that wasn’t on a lot of people’s radar: the Armada SUV.

Although maybe it should have been; the current generation of the biggest SUV in the lineup is halfway through its cycle, so it's only natural it should undergo a few changes. However, considering that the model we're being offered is actually a modernized version of the Nissan Patrol introduced in 2010 elsewhere in the world, we didn't have many expectations. Let's see what was done for the biggest player on the Nissan team for 2021.

Outside
First of all, while its proportions remain totally recognizable, there are notable aesthetic changes. The front end, for example, gets new grille, hood, front fenders, bumper, and LED headlights and fog lights. All of those changes serve to give the Armada a more muscular and masculine look.

Interestingly, the 2021 Armada will be the first Nissan product to feature the reworked Nissan logo.

In back, Nissan also focused on giving the model a more masculine look. Bumpers, tailgate, lights - everything has been redesigned. And as we saw on the 2021 Kicks, a strip connects the lights for a more upscale effect.

Inside
Where the changes are more surprising, and very welcome, is onboard, where the centre console has been completely redesigned. A good thing, because its presentation was literally a trip back in time to 2010. Most obvious is the huge multimedia screen at the top of the console. At 12.3 inches, it's the widest in the class, according to Nissan. And to give you an idea of the evolution here, the old unit was 8 inches and had a resolution of 800x480. The new one has a resolution of 1920x720.

Another 7-inch screen sits in the centre of the instrument cluster and informs the driver about a host of vehicle features.

The Armada is still available in an 8-passenger configuration, but captain's seats are available for the second row, reducing the capacity to seven people. Leather is standard on the SL model, and in the Platinum trim, the leather is padded. And, a rarer, but highly appreciated fact: four colours are available for the interior: charcoal, almond, brown and black.

Finally, a look at the product offering reveals the extent of the changes. With the SL version, for example, the following elements are new: control and braking systems for the trailer, LED headlights, lights and fog lights, the Nissan Safety Shield 360 safety suite, wireless connection for the Apple CarPlay application, a driver attention alert system, Internet access, wireless recharging for electronic devices and two USB-C ports.

That's where most of the add-ons are clustered. The Platinum model does benefit from new 22-inch wheels, padded leather on board and traffic sign recognition.

And as with the Kicks, where things doesn't change is under the hood, where the brand's 5.6L V8 is still the choice, offering a maximum of 400 hp and 413 lb-ft of torque and a towing capacity of 8,500 lb.

The redesigned Armada will hit dealerships in January 2021. 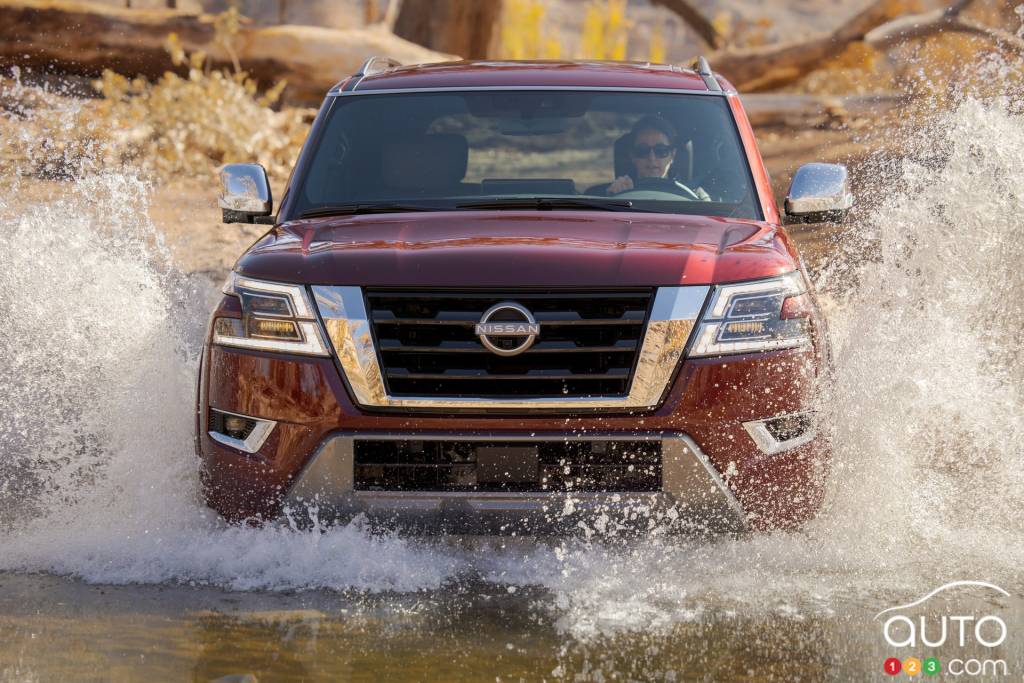 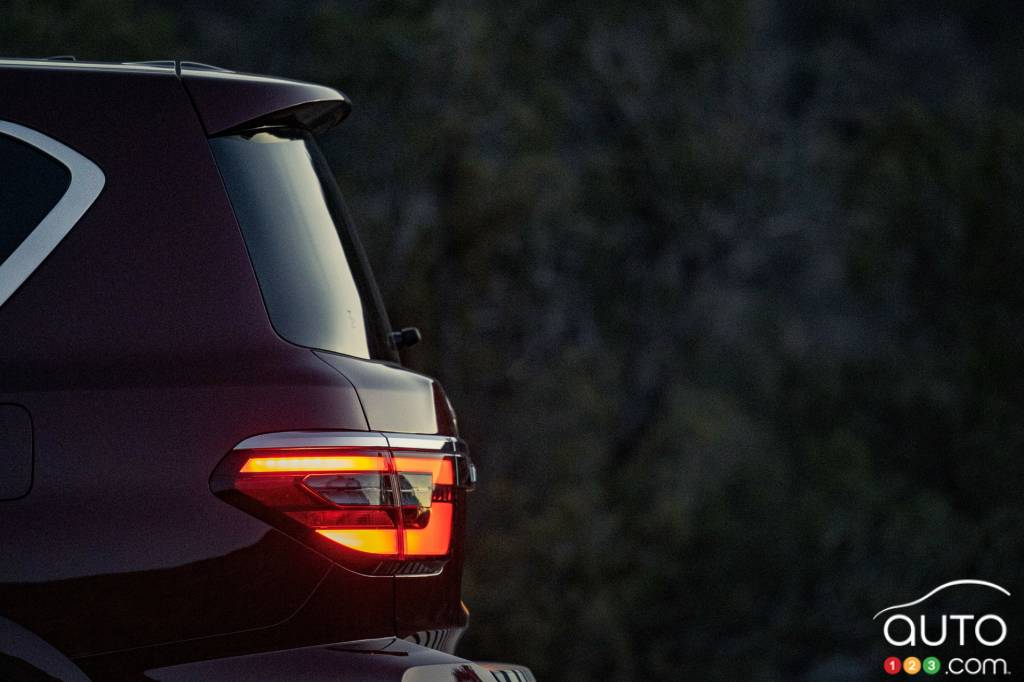 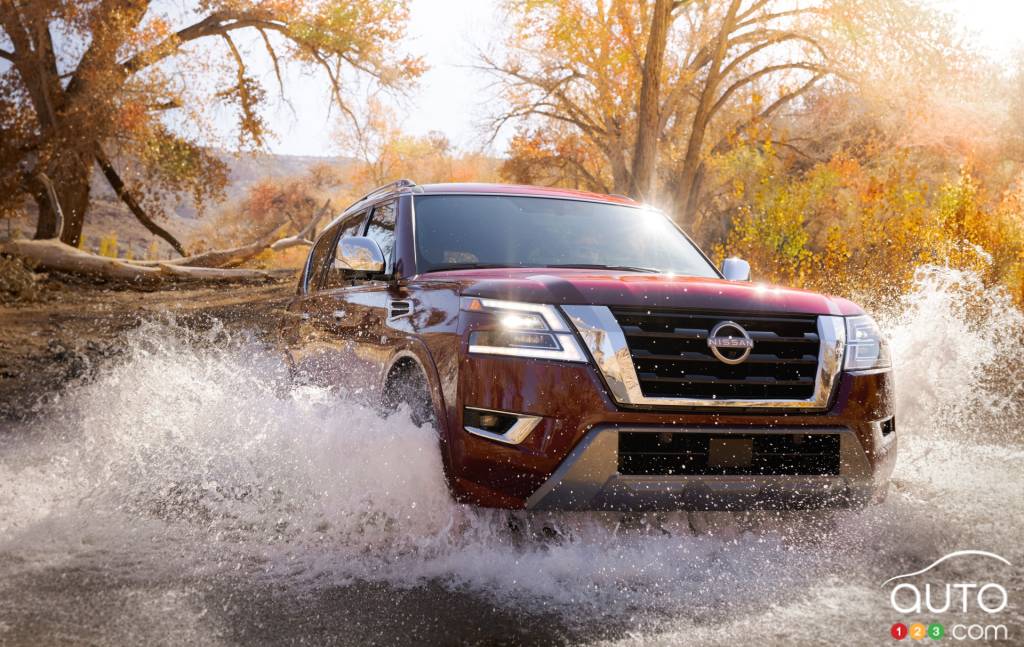 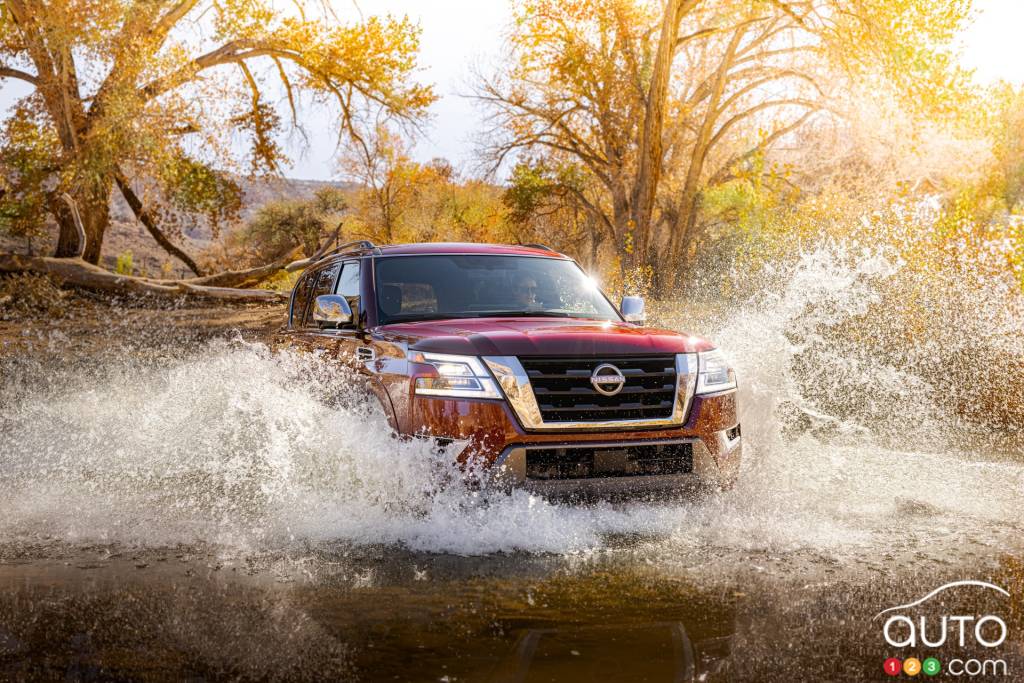 Could We Get a New, V6-Powered Nissan Armada as Early as ...

Nissan is reportedly working on the next generation of its Armada SUV and a major change is in the works. According to leaked information, the big SUV’s 5.6L...

The 2021 Nissan Kicks, a very serviceable weekend adventurer… within limits. The small crossover’s good looks also make it an appealing choice for those who ...