Subaru will include more standard safety tech in its 2021 Legacy and Outback.

In September 2019, just under a year ago, Auto123 traveled to first British Columbia and then to the Northwest Territories and Alaska to try out the overhauled new 2020 Subaru Legacy and Outback models.

The reason for the big fuss was that the Japanese automaker was unveiling substantially overhauled models, made more modern and offering more technologies.

Normally, a big revision like that is followed by few changes for the next two or three model-years. Normally. But for its two near-twins, Subaru has just announced a few additions to the roster of standard safety features for 2021.

For one, buyers of either model will now get LED headlights with a rotating function. The headlights follow the direction of the steering wheel, so they aim the beam of light in the direction of a left or right curve or turn. For two, the automaker is adding a rear-seat warning system, which will help avoid any users inadvertently leaving behind children or pets when leaving the vehicle. For three, a seatbelt warning system will now be included for each of the seats. 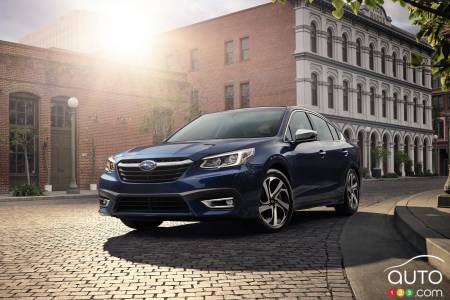 Subaru has also announced a slight price increase, at least for the U.S. American buyers will be charged $125 USD more for a 2021 Legacy than for the outgoing model; in the case of the Outback, the increase is $190.

We have contacted Subaru Canada to find out if the versions offered here will be any different than the models announced for the U.S., although that is unlikely, and if the price increases will follow in Canada. We will update this report as soon as we hear more.

Subaru Canada announces pricing for its 2021 Legacy and Outback models. The company also announced minor changes to one of the Outback versions.