We may be losing the Volkswagen Golf starting next year, but at least the GTI and R variants will continue on. In the case of the latter, the unveiling of the next-generation model will take place on November 4.

The news was confirmed by Tanner Foust, driver and former host of Top Gear America. Foust shared a video on his Twitter account announcing the date of the Golf R's unveiling. The short teaser video reveals very little about the car save for the headlights, which are the same as seen on the GTI and other 8th-generation Golf models. Curiously, the majority of the video is devoted to the presentation of the European T-Roc R.

Models spied in testing while in camouflage garb have provided a glimpse of a more-aggressively dressed model compared with the base Golf. It’s worth noting moreover that the R version seems to stand apart more from the GTI than the previous generation. The grille of the new GTI features hexagonal mesh and fog lights all over the bottom of the bumper, but the Golf R’s grille forsakes the mesh for simple slats and has two solid sections dividing the bumper's air intakes. 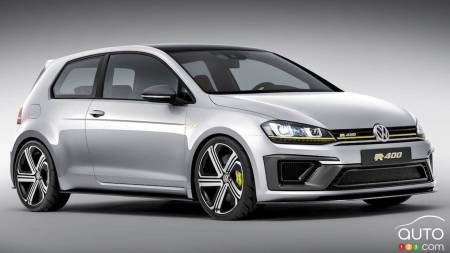 As far as power goes, speculation is that there will be two versions of the R. The base model would deliver an output of 328 hp, or 40 more than the current U.S. version. The lineup could also offer a Golf R Plus with nearly 400 hp on tap. You might recall that back in April 2014, Volkswagen presented the R400 concept at the Beijing Auto Show. At the time, that model was said to deliver a power output of 395 hp and a 0-100 km/h time of about 4 seconds. We expect something like that from a beefed-up R.

The relevant question for us now is whether Volkswagen Canada will bring both of these variants to our market, if of course there are two. We hope to learn more about VW’s plans on November 4th.

Volkswagen Teases First Image of the Next Golf R

Volkswagen has teased the next Golf R with a first image showing the rear end of the model. The next-generation VW Golf R will be fully revealed this Wednesd...

We put the 2022 Volkswagen Golf R to the test in less-than-ideal winter conditions. Is the little performance Golf up to the task? Here's our review of a mor...

All told, I had the opportunity to test drive about 75 models in 2021. Here are 10 that caught my eye, mostly though not always for good reasons. Auto123 loo...