Back in June, Subaru introduced the new Onyx variant that’s joining the Ascent lineup for 2022, part of a mild mid-cycle upgrade for the SUV. Yesterday, the automaker released pricing for this and the entire lineup for 2022.

The idea behind the Onyx is pretty simple: based on the Touring version, it gives the three-row midsize SUV black colours, accents and hues inside and out, to create a more sophisticated and slightly meaner effect. The 20-inch alloy wheels are black, as are the side mirrors, front grille and various other exterior elements.

The interior also gets touches of black, whether on the dashboard or the instrument cluster, as well as a new seat cover called StarTex, which has a water-repellent material designed to be easier to clean. 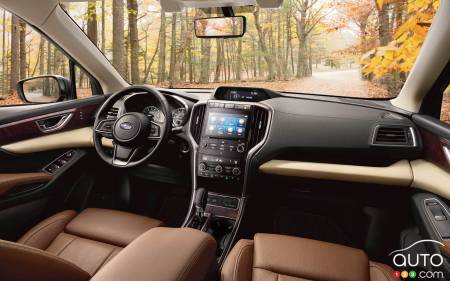 As it reaches the halfway point of its first generation, the Ascent is getting only minor changes for 2022 aside from the new Onyx trim. That means buyers won't find a Wilderness Edition of the Ascent at their Subaru dealer.

The model retains its current engine, a 2.4L flat-4 with 260 hp and 277 lb-ft of torque. It's mated to a continuously variable transmission (CVT) calibrated to mimic the shifting action of an 8-speed automatic. Official fuel consumption ratings for the model with this powertrain are 10.4L/100 km combined. The SUV has a towing capacity of 5,000 lb.

The 2022 Subaru Ascent and its new Onyx variant are expected to hit dealerships this fall. Subaru unveils two images that announce the imminent arrival of a second Wilderness version within the range. The general consensus is that the Forester is t...