Cavan, ON – Our visit to a remote barn in Peterborough County in Ontario had a specific purpose: Toyota's Canadian division had parked there two "pre-production" examples of the all-new 2022 Tundra for us to check out up close. The full-size pickup, in case you didn't know, was in dire need of a makeover after 14 years of loyal service without major changes.

In fact, the new model had already been shown on the Web via a few teaser images, but also a leaked photo showing the front three-quarters of the TRD Pro model. Toyota had no choice but to publish a high-resolution version of the same image to assuage impatient fans of the model.

Let’s be clear: the new edition of the truck represents no threat to the hegemony of the U.S. Big Three. But the 2022 Tundra could catch the attention of consumers who aren't really attached to those Ford, Chevy and Ram trucks, and even of some buyers who want to buy a pickup that’s of high quality and is more reliable and durable.

Quality, reliable, durable: those three words were employed a few times during our meet-and-greet by Toyota USA's chief engineer, Mike Sweers, who had a hard time hiding his enthusiasm for pickups. You can feel his love for the genre, even through a computer screen via a live online presentation. At the time of writing, we have no driving impressions to share with you, but it shouldn't be long before Toyota Canada puts together a day of testing before the model arrives at the end of the year. On this day, however, these two versions of the Tundra did allow us to see just how promising the new generation is.

Renewed design
Introduced in 2007, the Tundra was heavily revised in 2014, but as the years went by – during which time all the other full-size pickups were redesigned - the Toyota pickup had increasing trouble hiding its age.

For 2022, the Tacoma's big brother gets a pretty drastic change of approach. Not only is the TNGA (Toyota New Global Architecture) platform underpinning the truck new, but so is the sheet metal!

At the front, the bumper gets a large grille – large being an understatement here - flanked by two headlight clusters perched on fake black grilles. The TRD Pro edition is more aggressive with its T-O-Y-O-T-A lettering and LED auxiliary lights. As well, this off-road specialist has two black plastic panels on the hood and exclusive fender flares. The black and red rims from the BBS catalog are also unique to the flagship model.

The same is true of the rear, where the tailgate has a T-R-D P-r-o embossed signature and a finish identical to that of the fender flares. From the side, the new Tundra stands out with its blackened A-pillar and the window that rises up from the second-row door. In general, the new model exudes robustness.

Two fewer cylinders, two more turbos and even a little electricity!
As is becoming increasingly common in the world of full-size pickup trucks, the engine displacement is decreasing with each passing season. The trusty old 5.7L V8 has been thanked for its years of hard work. Its replacement, a 3.5L V6 powered by a pair of turbochargers, delivers 389 hp and 479 lb-ft of torque. While the extra 8 hp is a modest gain, torque is much improved with 78 more lb-ft. But that's not all - Toyota wants its new pickup to focus on power and performance. So there's a hybrid option based on the same turbocharged 6-cylinder engine. The machine, named i-FORCE MAX, develops 437 hp and 583 lb-ft of torque thanks to a motor-generator inserted between the gas engine and the automatic transmission. This small electric motor is powered by a 1.8-kWh battery pack hidden under the rear seat.

The hybrid version loses this natural storage space in the back, but no one will complain, because this version should consume less fuel.

This engine will be the only choice for the TRD Pro trim, while it will be available as an option on the Limited, Platinum and 1794 versions.

Also new is an all-new 10-speed automatic transmission; it’s a unit we're told has nothing to do with the other transmission offered by Lexus. This transmission should also help lower the Tundra's average fuel consumption. However, we'll have to wait for the official ratings coming in a few weeks to be sure. An interior up to expectations
Consumers used to Toyota models will feel at home when they see the new Tundra's dashboard. There are big buttons, a bunch of storage spaces here and there and even a good old-fashioned lever for the 10-speed automatic transmission. In less expensive models, only a small 4-inch screen is mounted behind the steering wheel, while a second touchscreen is located in the middle of the massive dashboard with its integrated air vents.

In the more-expensive models, a 12.3-inch information screen adds some life to a cabin that's mostly clad in dark colours, while a large 14-inch touchscreen is so wide that it affects the width of the centre vents. Even though these were pre-production versions, assembly quality already seemed to be on point, despite the presence of materials that don't meet the manufacturer's standards.

A wider choice
In addition to the more luxurious Limited, Platinum, 1794 and TRD Pro variants, Toyota will also bring back the more accessible SR and SR5 liveries. Two cabs will be available: Double Cab or CrewMax with four full-size doors. The latter can be paired with a 5.5' or 6.5' long bed. The Double Cab models will leave the Texas factory with a 6.5' or 8.0' cargo bed. An optional TRD Off-Road package (not as advanced as the one installed on the TRD Pro) includes 18-inch TRD wheels (or 20-inch wheels on Limited and 1794 models), a TRD grille, off-road calibrated suspension, skid plates, fenders, a leather-covered shift knob and TRD badging. The 4x4 versions also get an electronic limited slip differential, multi-terrain system and Crawl Control.

The TRD Sport package can be added to the SR5 4x4 version with any of the available cabs. The package includes 20-inch TRD wheels, TRD grille, TRD lowered suspension and TRD leather knob.

TSS 2.5 for all
As we've seen over the past few seasons, Toyota has been increasing its focus on its Toyota Safety Sense suite of safety features, and on its new pickup, version 2.5 of the system is standard on all models. The list of systems is too long to list. Suffice to say, there’s a lot there. A new suspension, a new chassis and a smoother driving experience?
Toyota gave us a ton of information on this day about its new Tundra, but what's missing from this first encounter with the truck is our driving impressions. That’s for another day, but for now, we can hazard a guess that the new boxy chassis and widened rear end for added stability will make the Tundra truck more fun to drive and more comfortable in the end.

The retirement of the leaf springs in the rear in favour of a multi-link arrangement that can also be combined with an air suspension for the rear axle is also very good news for those who spend a lot of hours behind the wheel of their pickup.

We'll be able to judge all these new improvements as soon as the vehicle is made available to us to drive. 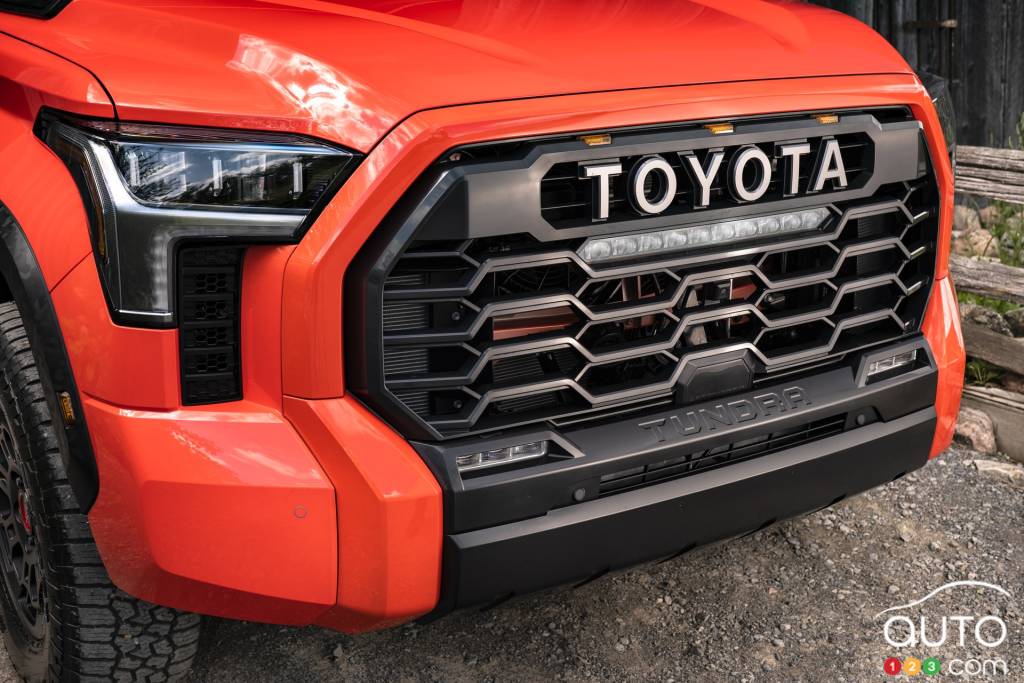 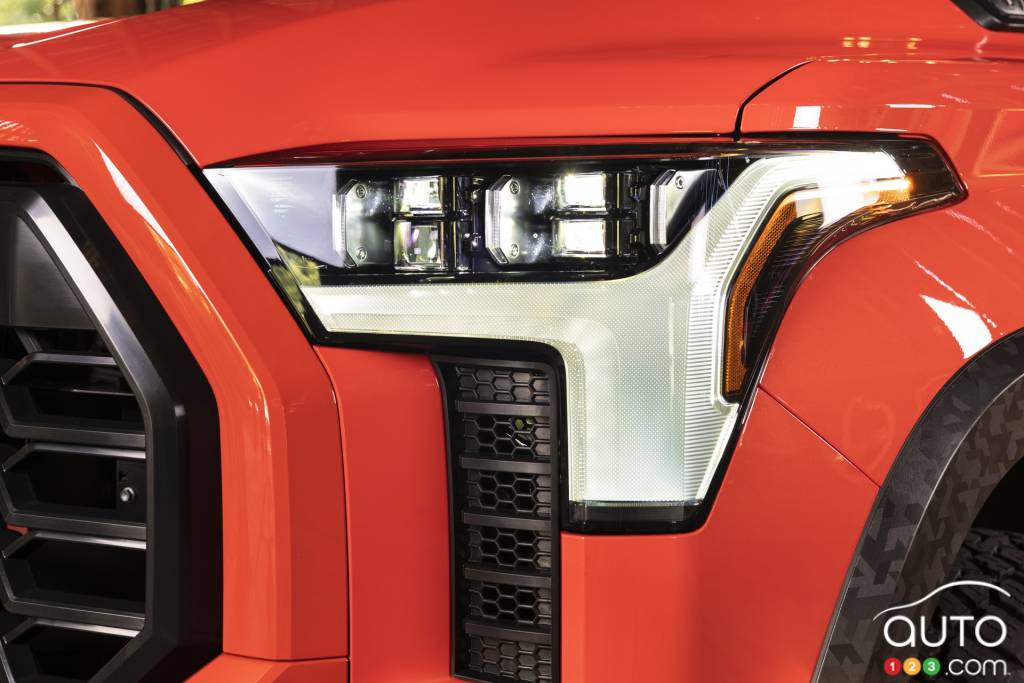 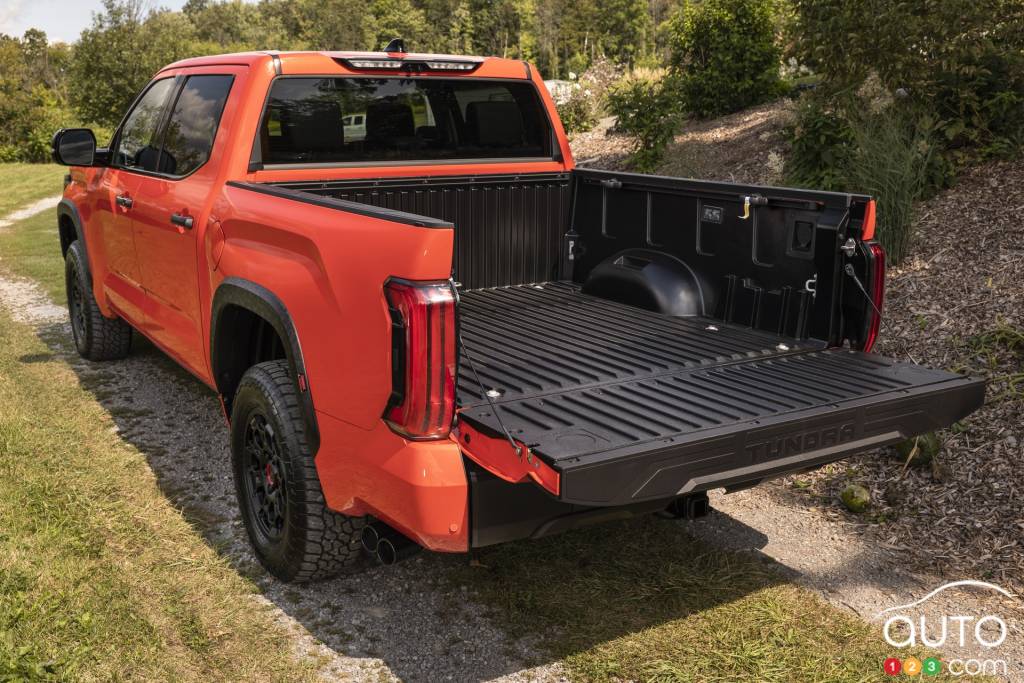