Honda yesterday released a couple of teaser images of its 2023 Civic Type R, in camouflaged pre-production form. The images were taken as the revised performance edition was about to take on the famed Nürburgring track as part of its testing phase.

The images reveal that the pre-production Type R is fitted with bigger air intakes than the outgoing model, as well as black alloy wheels and red Brembo brakes. We can also make out Michelin Pilot Sport 4S performance tires. Hard to miss as well is the outsized spoiler resting on the trunk.

Beyond that, we’ll have to wait for more details from Honda, notably regarding performance specs and what sits under the hood. It’s widely expected the model will once again run on the current 2.0L 4-cylinder turbo engine, though probably with a bit more power than the 306 hp and 295 lb-ft of torque generated at present. Honda previously reassured fans of the model that a 6-speed manual transmission will once again be the only choice for the Type R in 2023.

Honda says the model will be ready for a full unveiling early in 2022, but is declining to get more specific than that for now. From then, expect the 2023 Civic Type R to go on sale later next year, probably with at least a modest price increase. 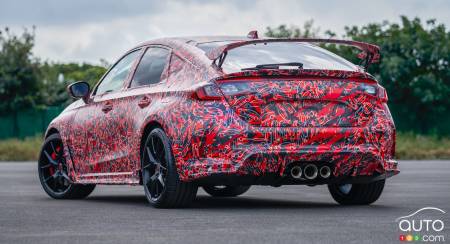