The XM is the first model developed exclusively by the M performance division since the M1 in 1978 Automotive columnist: Daniel Rufiange , Updated: 2022-10-25

•    The XM is the first model produced specifically by the M performance division since the M1 in 1978.

First introduced a few weeks ago, the BMW XM is the first M-only vehicle produced by the performance division since the famed M1 in 1978. It is not, thus, a regular BMW model that gets the M treatment.

The XM also becomes the most powerful vehicle in the lineup with its 644 hp. But now the company is going a step further with the Label Red variant, announced last month and previewed today. This variant has an output of 738 hp.

The company gave a glimpse of this singular SUV by posting an official image and several preliminary specifications on social media. Intriguingly, BMW's Instagram post claims 750 hp, but you can see 550 kW in parentheses, a figure that translates to 738 hp. Whichever figure is correct, drivers are unlikely to notice the difference when driving.

That horsepower will come from a plug-in hybrid powertrain that should provide around 50 km of range (we're talking 55 miles or just over 80 km on the European WLTP cycle). The plug-in hybrid system in the regular XM model takes the form of a twin-turbocharged 4.4L V8, which provides the ‘base’ 644 hp. An electric motor is integrated into the transmission and connected to a 25.7-kWh lithium-ion battery. 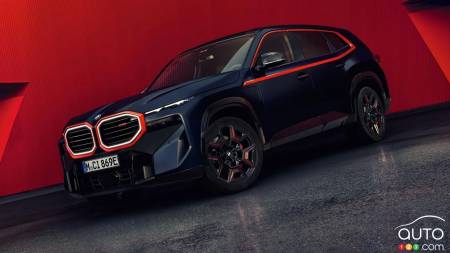 Aesthetically, red accents mark the exterior of the model; subtlety is not the point here. Those accents encircle the front end’s nostrils, but they’re also on the rims and around the windows. A red logo is also placed on the grille and we can be sure there will be red accents inside.

Assembly of the model gets underway in the fall of 2023, which means we can expect the variant to show up in dealerships in 2024. We'll have the opportunity to come back with more details on the exact timing. The same goes for Canadian pricing. With the anticipated pricing in the U.S. believed to be over $180,000, we can expect a bill of over $200,000 CAD here.

The 2023 BMW X7 offers more power from its inline 6-cylinder engine this year, in addition to receiving a few other improvements and updates. Here's our revi...

Mopar will showcase electrified concepts at the upcoming SEMA show in Las Vegas. In the process, the parts, accessories and performance division will give us...