Eagle River, WI - Does the name Eagle River ring a bell? If you were following snowmobile racing a few years back, you know the place. That’s where Jacques Villeneuve, brother of legendary F1 driver Gilles, won quite a few events in the past.

Nowadays, it’s Subaru of America’s chosen location for offering advanced driving lessons on ice and snow. Subaru recently invited a few North America journalists to see firsthand how its team of rally and ice racing specialists teach some of its guests (winners of contests at Subaru dealerships or else people who sign up for the program) at an event called the Subaru Winter Experience.

Of course, February and March are the ideal (as in, only) months to do so. The instructors of the Sweden-based FlatOut racing school, aided by their counterparts at the DirtFish rally school in Washington State, have created test courses on the frozen surface of Dollar Lake in the small village of Eagle River in order to introduce participants to the many capabilities of the all-wheel drive Subaru WRX and WRX STI and of the rear-wheel drive BRZ. 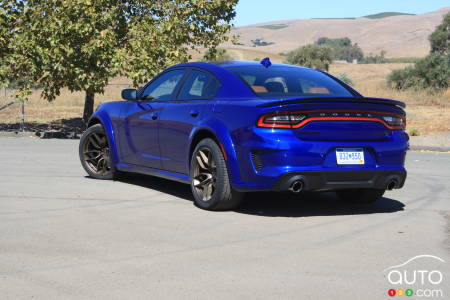 All the cars used by FlatOut are factory-spec, non-modified Subarus. The only additions are racing stickers and special Lappi multi-studded performance winter tires imported from Sweden. Some of the cars are equipped with automatic transmissions, others with manual gearboxes.

The most powerful car of the bunch is the WRX STI with its 2.5L turbocharged flat-4 that pumps out 310 hp, while the tamer WRX also has a 2.0L flat-4 that delivers 268 hp.

The humbler BRZ also uses Subaru’s 2.0L flat-4, but as it’s not turbocharged it yields only 205 hp. The bigger challenge for the BRZ is that it’s a rear-wheel-drive model – so no AWD help here.

The driving school runs for a very short period (in 2019, from February 12 to March 1), and it’s currently in its second year of operation (the school is already taking reservations for next year). Granted, it’s not cheap, costing some $1,500 USD for a single-day experience, but everything is provided including the cars. 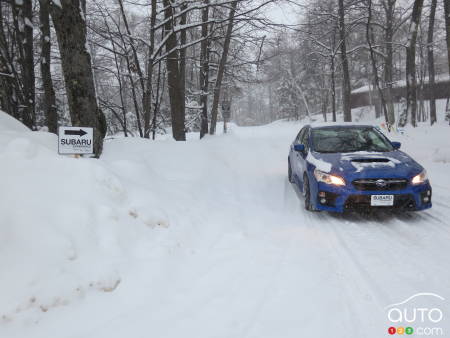 The Subaru Winter Experience was inspired by much costlier winter driving schools put on by premium car manufacturers like Porsche. Its greatest advantage in relation to those? It uses affordable vehicles. The Subaru cars we drove all have drive-mode configurations including fully automatic aid systems and an even more exciting Track mode in some cases that limits the traction control but still keep the stability control on. In the case of the BRZ, it made the car much more exciting to drive.

The Experience
Though we spent only one day out on Dollar Lake, the course is available as a two-day program for people who want to improve their winter performance driving techniques. Still, no special skill is required to take part!

The session starts with a short reconnaissance course where participants get better acquainted with all the cars, including both manual-gearbox and automatic-transmission versions.  Note that the instructors do not ride as passengers but stay outside to observe, keeping radio contact with each driver.

The short course includes a short manoeuvre that requires use of the very efficient ABS braking system of the Subaru cars. In some cases, an instructor might accompany the “student” driver to show them the correct technique of braking hard while steering the vehicle to avoid things like moose (disguised here as orange cones). 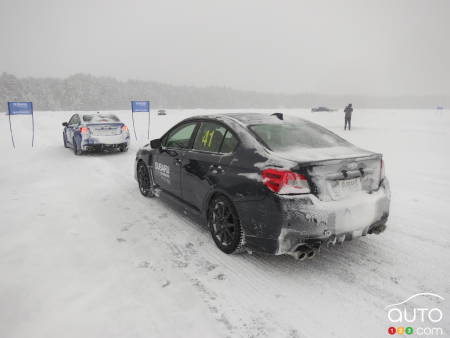 Drivers are asked to try out each of the cars’ drive modes, which may vary from fully automatic electronic help to no assistance at all, all while getting the most out of the all-wheel drive system on the WRXs or exploiting the drifting capabilities of the rear-wheel-drive BRZs. During our stay at the driving school, it began to snow heavily, to the great pleasure of the instructors. Obviously, this made the driving a little trickier as the tires tried to dig around in the big layer of snow in order to get the studs to grip on the firmer ice surface.

Once participants’ lesson in basic driving techniques is completed, the program continues with a faster and more-elaborate course that involves a lot of input from the Subaru’s drive-assist technology, before it all culminates with a spin in the exciting Track mode. No surprise, the BRZs were more difficult to tame, while the all-wheel drive WRXs seemed the most exciting to drive - until we tried the STIs.

Speeds were kept between 35 to 45 mph (55 to 70 km/h) making each experience relatively safe even as the snow storm continued to intensify. Early in the afternoon, we were directed onto a faster (with speeds now approaching 60 mph (100 km/h)) and more-elaborate circuit where I ascertained that I liked the base WRX more. It’s an easily tameable vehicle that, with a little practice and some time spent cycling through the driveg modes (done via a control knob on the console), becomes a practical tool at the service of the sport-minded driver.

Finally, we got to drive on a full-fledged rally course. In this case, the drivers’ ability was put to a greater test, and in fact there were some “unplanned off-road excursions”, though none that resulted in any damage or injury. This last was the course that proved the adage that sometimes “Slow is fast”. We did well to remember the valuable bits of advice given by the instructors and putting them to good use. 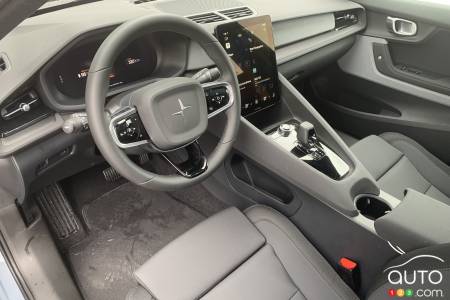 A lesson from the Pros
Fun as that was, the best was yet to come. Indeed, we were invited to ride as passengers in the cars now driven by professional drivers such as Patrick Sandell from the Subaru Rally Team USA. After less than a lap with one of these professionals at the wheel, we understood that we still had a lot to learn and a lot of laps to get under our belts before we would really grasp all of the capabilities of these three Subaru products. Hence that second day of driving offered to the participants who mean business!

Think of the Experience as an adventure trip where cars can be driven to their maximum potential in a safe and entirely legal situation. I may be a seasoned Quebec driver used to drive on snow and ice, there was much to be learned or perfected at this event.

By the way, you don’t have to own a Subaru to partake in the company’s Winter Experience. Of course if you do sign up and take the course, you may find yourself tempted to buy one! 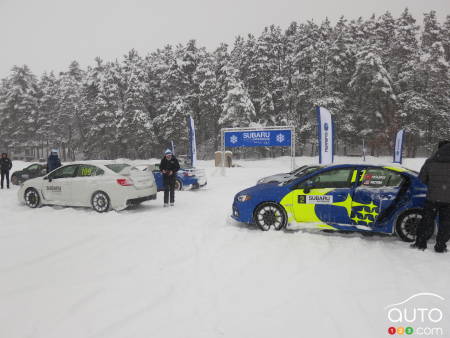 Subarus used at the Winter Experience:

Subaru WRX: Four-door compact sedan with Symmetrical all-wheel drive powered by a 2.0L turbocharged flat-4  that develops 268 hp, manual or CVT transmission. Price in Canada from $29,995 to $ 40,995 (for the RAIU Edition). 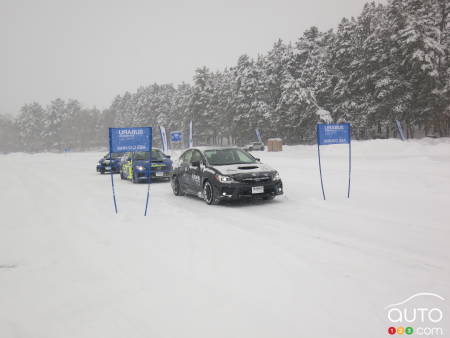 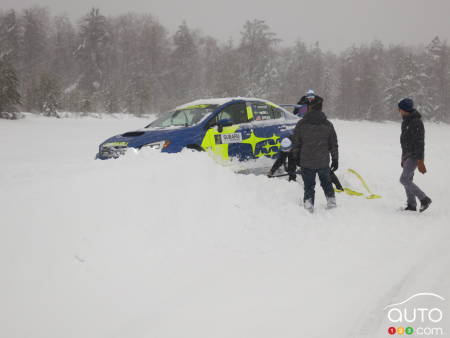 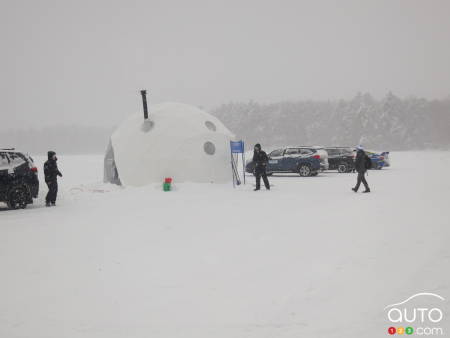 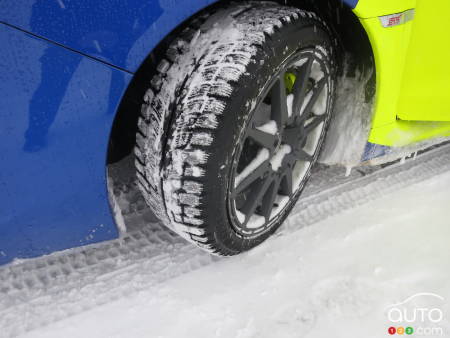 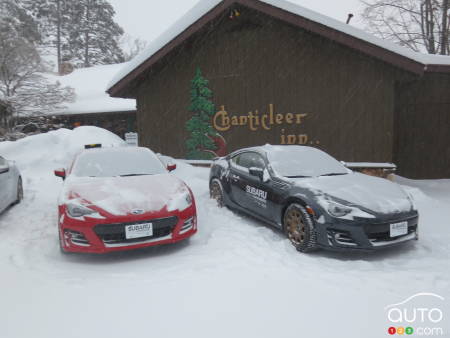 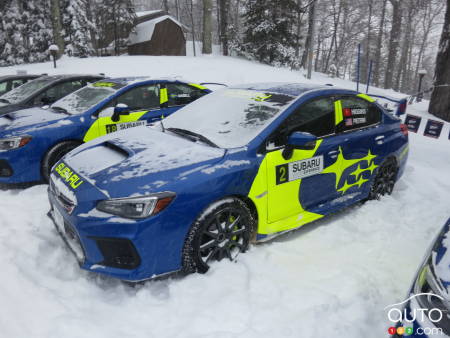 Subaru Winter Experience 2020: The Art of Waltzing on a F...

At the invitation of Subaru Canada, we returned to Wisconsin this winter to drive Subaru cars at high speed on a frozen lake, because why wouldn’t we?

A Two-Door Subaru WRX/STI on the Horizon From Subaru/Toyo...

Subaru and Toyota have collaborated on the 86/BRZ duo but the common ground might not end there. The two automakers are said to be looking at producing a nex...

Subaru Canada today officially presented – virtually - the 2022 BRZ, fortified by a more-powerful engine and improved chassis. The model is expected to arriv...