Eagle River, WI - It takes a certain amount of fortitude - or lack of common sense - to fly in the middle of winter, especially after a snowstorm like the one that trounced us the Monday this month we headed for the state of Wisconsin, United States.

A trip that normally takes about 12 hours with breaks at two airports ended up costing more than 22 hours of our non-valuable time in the end, all because of mechanical problems with the aircraft parked in Montreal. This is a good example of the unpleasant surprises of this profession, which consists in traipsing across the continent and the globe in chase of whatever’s happening in the automotive world.

Fortunately, after three flights and a 45-minute taxi ride in a van of rather dodgy provenance, the rustic Chanticleer Inn in Wisconsin, our home for the next two days away from home, was waiting for us peacefully at a late hour of the night. The next morning, a day of ice driving awaited us just a few steps from the hotel.

Dubbed the Subaru Winter Experience, the ice driving event is already in its third year of existence; the program was put together by Team FlatOut, a Swedish company specializing in organizing racing-related events, with the participation of the Seattle-based DirtFish American Driving School.

The event sponsored by the Japanese manufacturer is, of course, an excuse for participants to work on perfecting their driving technique on very slippery surfaces, but it also serves to illustrate the surprising capabilities of the brand's vehicles.

The Subaru Winter Experience's other avowed mission is to keep consumers enthralled by Subaru's sportier offerings, which include not only the BRZ coupe but also the WRX and WRX STi sedans. The latter has marked the modern history of international rallying with its large rear spoiler and blue and yellow colouring.

One, two or three days
Before getting into the main events of our driving day, it’s worth noting that the program can be spread over several days (up to three), depending on the ambitions of the participant. In other words, it’s possible to register for a much more in-depth (and more expensive) three-day training course, which is a longer option that allows the driver to push the envelope a little more on the frozen circuit.

A day on the lake
After a good lunch, participants are invited to take a seat in one of the two cars used for the course. As fate would have it, I started this experience behind the wheel of the BRZ coupe, a sports car that’s clearly not going to be the first choice of consumers to drive in winter because of its rear-wheel drive.

Fortunately, the BRZ comes with a limited-slip differential, a component that makes winter driving much easier because of the increased traction provided by these two rear wheels working in tandem.

However, the cars present at this driver training day were equipped with studded winter tires from the catalogue of Swedish company Lappi. Please note that these winter tires are not authorized for on North American roads; the DOT badge is conspicuous by its absence on the side of the tires.

In addition, these tires’ 3-mm-long studs undoubtedly improved the traction of the vehicles used for this driving day.

Basic exercises
Drivers need to be a little more adept when driving the coupe on the lake, what with the rear end constantly trying to pass in front. In fact, a slalom exercise showed that the BRZ can easily be controlled with or without the safety nets (stability control and traction control). After a few passes, we felt in full control. In the second exercise, it was the Subaru WRX STi's turn to act as a guinea pig for an evasive braking manoeuvre. Drivers were instructed to accelerate to 40 mph (64 km/h) and then brake hard while avoiding an obstacle, marked by a series of sticks embedded in the ice.

Though the exercise only lasts a few seconds, you can see that the sedan is a very different creature from the BRZ coupe, not only because of its all-wheel drive, but also because of its turbocharged powertrain and even the huskier sound of its flat-4-cylinder engine. Even the steering column is heavier, which also applies to the handling of its shifter.

On the track
After the morning break, we moved on to serious business, with the participants once again divided into two sub-groups. In group A, the BRZs were let loose on a portion of the prepared track, while in group B, the WRX STi sedans took over the many curves of a prepared track. This time, it was behind the wheel of the sedan that I got to experience the virtues of the Subaru lineup’s flagship car. Unlike the BRZ, the WRX STi is a monster of four-wheel grip, the constant-grip all-wheel-drive system greatly facilitating the driver's steering-wheel movements. In fact, a later test of a Subaru WRX with CVT transmission on the same track revealed this STi trim is noticeably advantaged in comparison with its more-sober counterpart: when skidding, I didn't have to work as hard to maintain the desired skid angle and trajectory.

In addition to its very precise steering, the WRX STi brakes pretty well, even on the icy surface. (Note: the claws on the tires help a lot here). As for the power of its 2.5L (310 hp) turbocharged flat-4-cylinder engine, it's perfectly calibrated for the chassis of this Japanese sedan. We saw further proof of that when driver-organizer Patrik Sandell, official member of the SRTUSA team (for Subaru Rally Team USA), showed the full extent of his talent with some high-speed - and high-precision - laps!

A word about the WRX: the two WRX sedans present on this day on the lake were reserved for instructors, but we could also test-drive the more docile sedan. Aside from the reduction in power and slightly less-convincing electric steering in tight corners, the continuously variable transmission stood out here, and not necessarily for the right reasons. Let's just say that it behaved like a switch. Every touch of the right foot resulted in a vertiginous rise in engine speed. The WRX STi may force the driver to drive with three pedals, but the rises and falls of the RPM were much more gradual. The other test car, the BRZ coupe, once again demonstrated that it's possible to drive a sporty rear-wheel-drive vehicle at high speeds on a low-traction surface. Even at the end of the day, my colleague and I had put to bed all the driving aids to perfect our skills at controlled skidding without the intervention of electronics. The BRZ is less indulgent than 4WD sedans, but that's what makes it so appealing! The atmospheric powertrain also behaves differently than the turbocharged units.

The last word
At $1,295 USD, this program is obviously not accessible for all budgets. For this price, participants of course have access to the lake, but also get a gourmet lunch. As you expect, the rates are higher for two- or three-day programs, which also include accommodation and a few more meals served by Daniel the in-house chef. 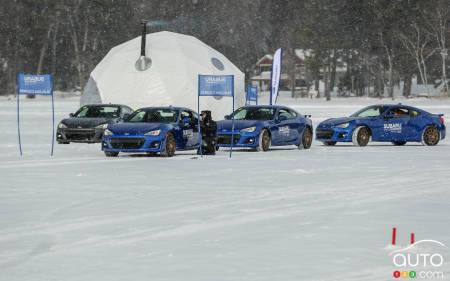 Steep it may be, but it’s a relative bargain when compared to what other manufacturers offer in North America. Subaru is after all a mass-market brand, unlike the premium German automakers that sell this type of experience in the United States and Canada.

The rub, at least for Canadian consumers, is that this price doesn't include transportation to the location. And for now, there’s no plan to bring the Subaru Winter Experience across the border to Canada - although the man ultimately in charge, Patrik Sandell, hasn't closed the door on this possibility. 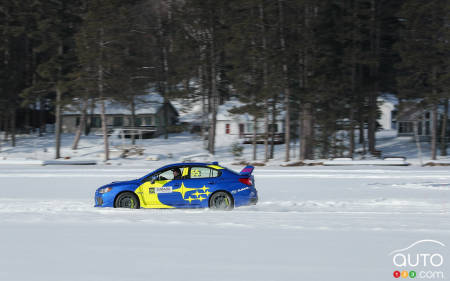 Subaru is recalling around 165,000 vehicles due to a fuel pump problem. In Canada, 12,601 vehicles are affected by the campaign, which targets a number of th...

A First Look at the Next Subaru WRX

Subaru has shared an image showing the next-generation WRX, or at least a blurry top half of it. The model is due to be unveiled "soon", as is the other spor...