No one can accuse the German automakers of not being organized in their strategies. Earlier this month, BMW announced it would produce 12 electric models by 2025. Now, Audi confirms that by the same year it will introduce… 12 electric models.

We previously reported that Audi wants to hit 800,000 units of electrified vehicles sold by that 2025 marker, half of them fully electric. Now we know that the path to get there will go through a dozen models.

The ball is already rolling, in fact, with the official presentation a couple of weeks back of the e-tron, an electric SUV that will go head-to-head with Jaguar’s I-Pace and, eventually, Mercedes-Benz’ EQC.

The second model coming up behind the e-tron is in fact a variant of it, more specifically a sportier version of the SUV, notably in terms of its appearance as clearly indicated by the name: e-tron Sportback.

By next year, consumers visiting Audi showrooms will thus have two electric models to choose from.

As for what comes next, we’re in pure speculation mode at this point, though the Carscoop website did learn that it will span the length and breadth of the Audi lineup – meaning we can expect to see electric wagons, hatchbacks and, of course, SUVs. Audi’s strategy is clearly to cover nearly all automotive segments.

We’ll be looking to see which platforms are chosen for these upcoming models. Even the most versatile modular platform couldn’t possibly accommodate all 12 of the planned vehicles, so we’ll have to see which direction Audi goes in.

Audi could well make even further use of the MLB architecture already in use on models like the A4, A7 and new Q8, as well as the new e-tron. Other models may get the PPE platform, currently in development conjointly with Porsche. It’s likely as well that the smallest future Audis will borrow at least some elements from the Volkswagen catalogue.

By that 2025 marker, Audi wants one-third of its global sales to be comprised of vehicles that are electrified in one form or other. 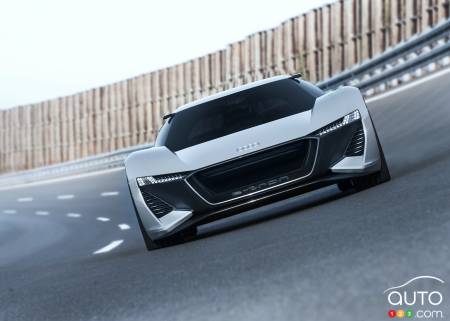 During its annual shareholders’ meeting today, Audi stated that it intends to sell 800,000 electrified vehicles annually by the year 2025. Its ambitious goal...

Audi is reportedly looking at producing a smaller all-electric crossover by 2021 as part of its drive to market 12 electric models by 2025. According to Brit...