It was an inauguration for Audi at Monterey Car Week as the German automaker unveiled a concept car for the first time at Pebble Beach. The highly aerodynamic Audi PB 18 e-tron was developed in the company’s new design studio in Malibu, California.

The concept’s name, PB 18 e-tron, refers both to the Pebble Beach venue for the premiere and to the technological origins it shares with the LMP1 racing car Audi R18 e-tron.

The new concept is somewhat similar in appearance to the Audi Aicon concept unveiled in 2017, in regards to design elements like the side windows that angle inwards and the extremely extended wheel arches, as well as the electric powertrain with solid-state battery as energy storage that they share.

It’s in their respective vocations that the two models differ, and significantly so. While the Aicon was designed as a fully automated, long-distance luxury vehicle, the PB 18 e-tron is conceived as a performance-minded driving machine, at home on the racetrack and on the road.

Level Zero
This was the name given internally at Audi to the prototype, mainly to set it apart from the Levels 3, 4 and 5 of autonomous driving currently in use at the company. So that in the new concept, the driver is still at the controls, steering and applying force on the pedals.

The vehicle is stripped of complex drive assist systems and extraneous comfort features, helping reduce overall weight. The driver’s seat and cockpit are integrated into an inner monocoque shell that can be slid laterally. When driven solo, the shell can be positioned in the centre of the interior as in a monoposto – the perfect location for the racetrack. This is made possible in good part by the by-wire design of the steering and pedals; a mechanical connection of the control elements is not needed.

“We want to offer the driver an experience that is otherwise available only in a racing car like the Audi R18. That’s why we developed the interior around the ideal driver’s position in the center. Nevertheless, our aim was to also give the PB 18 e-tron a high degree of everyday usability, not just for the driver, but also for a potential passenger.”

- Gael Buzyn, Head of the Audi Design Loft in Malibu

That potential passenger can be accommodated when the driver’s shell is placed in the side position. 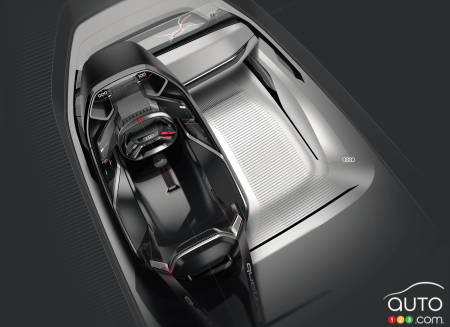 Made of aluminum, carbon and multi-material composites to lighten it as much as possible, the body follows the traditional architecture of a mid-engine sports car with a cab that is positioned far forward. The car’s centre of gravity is located behind the seats and in front of the rear axle – which benefits the driving dynamics. This does not involve the engine-transmission unit, as in a car with a conventional drive system, but rather the battery pack.

Three electric motors and quattro drive
The Audi PB 18 e-tron uses three electric motors. One sits up front and two others in the rear, centrally located between the steering knuckles, each directly driving one wheel via half-shafts. They deliver power output of up to 150 kW to the front axle and 450 kW to the rear. Thrr powertrain incorporates Audi’s Quattro all-wheel drive system.

Maximum output is 500 kW, with boosting, the driver can temporarily mobilize up to 570 kW. The combined torque of up to 612.2 lb-ft allows acceleration from 0 to 100 km/h in a little over two seconds –only marginally different than that of a current LMP1 prototype.

The Audi PB 18 e-tron is designed to recover large amounts of energy while being driven: up to moderate braking, the electric motors are solely responsible for decelerating the vehicle. The hydraulic brakes are only used in heavy braking situations.

Charging
The liquid-cooled solid-state battery has an energy capacity of 95 kWh. A full charge provides for a range of over 500 km. The Audi PB 18 e-tron is designed for charging with a voltage of 800 volts, in which case the battery can be fully recharged in about 15 minutes.

The Audi PB 18 e-tron can also be charged cordlessly via induction with Audi Wireless Charging (AWC), similarly to what BMW has done – see our report here. A charging pad with integral coil is placed on the floor where the car is to be parked and connected to the power supply. The alternating magnetic field induces an alternating voltage in the secondary coil fitted in the floor of the car, across the air gap. Audi will be at this year’s Pebble Beach Concours d'Elegance to unveil its new PB 18 e-tron Concept. The manufacturer see the model as a design template for ...