Bentley caused quite a shock five years ago when it launched its first proper SUV. The opulent Bentayga, considered a heretical gesture on the part of the company by some, has proven a huge success for the luxury automaker. This week, the company announced that it has now sold more than 20,000 units of the Bentayga, which is assembled at the Bentley plant in Crewe, in the United Kingdom.

The model has become of the brand’s most popular products, even if it has but a fraction of the history of the Continental GT and the Flying Spur. And sales continue to climb, the model having increased its sales in 2019 by 18% over the year prior.

The Bentley lists at nearly $300,000m and if you’re wondering how that’s justified, consider that each vehicle takes over 100 hours to be assembled on a production line manned by a team of 230 craftsmen, each one assembling his or her portion by hand. That doesn’t explain all of that exorbitant asking price, but it helps.

Without doubt, the arrival of the Bentayga has spurred the company into strong growth. Bentley has posted sales growth every year for the past seven, in fact; last year it sold 11,006 units around the world, compared to 10,494 in 2018.

In order, the four largest markets for the luxury brand are the Americas, Europe, China and the U.K. 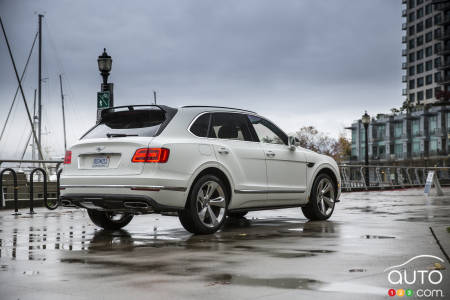 We Could See an Electric Version of the Lincoln Corsair.....

Lincoln will develop an electric version of its Corsair SUV for 2026, and build it at the automaker’s plant in Oakville, according to Automotive News. Ford h...

Mercedes-Benz presented the latest addition to its electric range, the EQA 250. For the moment, the model is destined specifically for the European market, b...