Over the past year BMW has introduced new vehicles and concepts featuring bigger front grilles. The iconic double-kidney grilles that have been a trademark of the brand for decades have continually evolved over the years, but the response to the recent growth spurt has been far from unanimously positive.

Two current vehicles in the BMW lineup sport the bigger front grille, the new X7 SUV and the revised 7 Series. The company has also endowed its Concept 4 prototype with a larger grille, and spy shots of the upcoming M3 and M4 suggest they will get the same treatment.

According to Peter Henrich, product head at BMW, feedback from consumers in response to the new design feature has been “very positive”. He believes the company has to take bold measures in order to please its base customers, who tend not to be afraid to draw attention by driving a vehicle with a lot of character and a strong visual signature. The company sees the strong sales results for the X7 and the 7 Series and sees no reason to back down from its design strategy. 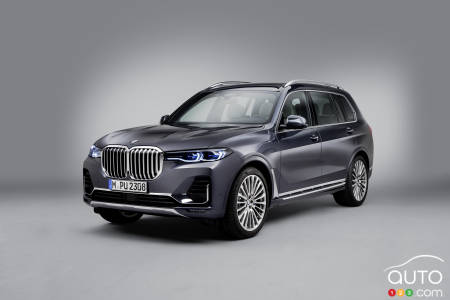 "When first shown the X7, people said: 'How big is the kidney grille?' But customers never reacted like that and the car is a great success. It's sold out for a very long period and people love it."

The executive did point out that not all of BMW’s models will adopt an outsized front grille. The decision to add that feature or not will depend on the type of the vehicle and the image the brand wants it to project.

He also made the point that those who criticize such bold new design features are often simply “afraid of something new”. There’s certainly something to that, as witnessed by the scathing reaction to Tesla’s Cybertruck.

No matter what critics or fans have to say about the big new double-kidney grilles, the ultimate arbiter will be sales figures racked up by the models that have them in the coming years.

BMW Shows Off a Pickup Version of New X7 SUV

BMW has shown a pickup version of its new X7 SUV. Don’t get your hopes up, however – the company got apprentices at its vocational training centre to design ...

The BMW X7 is a rather impressive monster, but is it worth the asking price? See 10 things about it, including some questions related to the hefty price tag ...