That some stretches of freeway in Germany do not have speed limits is more than a well-known fact, it’s legend. Videos of folks filming themselves doing outrageous speeds on stretches of the Autobahn are, shall, we say, not uncommon.

One recent video posted online has, however, sent authorities into a tizzy. The owner of a Bugatti Chiron went beyond the bounds of reason. Way beyond. The man drove his car at up to 417 km/h on a stretch of the Autobahn A2 between Berlin and Hanover.

The German Ministry of Transport has criticized the high-speed stunt, carried out by a Czech millionaire aboard his Bugatti Chiron.

Accompanying the video is an explanation by the driver, who writes that the video was filmed last year on a straight, three-lane, 10-km section of highway and that visibility was excellent along the entire stretch. “Safety was a priority, so the circumstances had to be safe to go”, he explained.

Still, the Chiron can be seen passing several vehicles. It's worth noting the commendable discipline of German drivers, who are not in the habit of changing lanes without first checking the surrounding traffic. However, not everyone can see a vehicle coming at over 400 km/h.

Authorities in Germany are obviously aware that their highway network includes sections without speed limits, but the Ministry of Transport said in a statement Wednesday that it “rejects any behavior in road traffic that leads or can lead to endangering road users”.

It added, citing the country’s road traffic laws, that “All road users must comply with the rules of the Highway Code… every person must behave in such a way that no other person is harmed, endangered or inconvenienced more than is unavoidable in the circumstances.”

The Ministry noted that the law also requires drivers to operate at a speed that ensures the vehicle is under constant control. 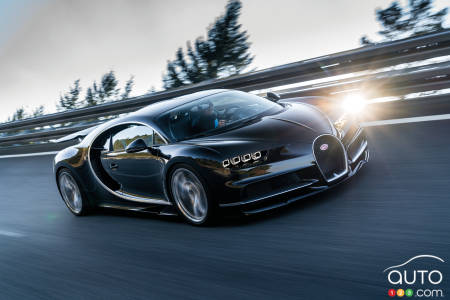 It’s clear that at 300 or 400 km/h, a vehicle can put the lives of others, as well as the driver themselves and any passengers, at great risk. The man behind the stunt said that his faith was a precious help in the realization of his feat... in addition to his driving skills.

Might this video create enough momentum to change the law? In Germany, many have been calling for years for the abolition of highway sections without speed limits. During last year's election campaign, the Green Party, now a minority partner in Germany's coalition government, called for a 130 km/h speed limit on the motorway network as part of efforts to reduce the country's carbon dioxide emissions. However, this idea was dropped as a result of negotiations to form the new government.

Unsurprisingly, though, every time a video like this is released, the debate is reignited. Will we ever see speed limits on the stretches of road that don't have them?

Bugatti Will Produce Another 40 Chirons... and That Will ...

Bugatti has announced that it will make another 40 Chiron supercars to reach its goal of 500 units produced in all. The Chiron will of course be followed by ...

Bugatti has announced the arrival of a 1,577-hp Super Sport version of its Chiron model. The poor old base version has to make do with an output of only 1,47...

Bugatti presented a 1,577-hp super during Monterey Car Week leading up to the Concours d’Elegance at Pebble Beach. The Centodieci is designed as tribute to t...