A new report by GM Authority - not yet confirmed by General Motors (GM) – indicates that 2022 will very likely be the last year for the Buick Encore and Chevrolet Trax.

This would not be a surprise. The writing was on the will in big block letters from the time Buick’s Encore GX and Chevrolet’s Trailblazer were introduced two years ago. The Encore GX and Trailblazer are far more modern and offer significantly more space.

In fact, it's amazing that the two older, smaller models have survived this long. Since the debut of the Encore GX, sales of the smaller Encore have fallen off a cliff, and it’s the same story for the Trax since the Trailblazer arrived. Meanwhile, the new models are seeing their sales grow at roughly the same pace.

According to GM Authority, production of the Buick Encore at GM's Bupyeong plant in South Korea will end in the third quarter of this year. A Buick spokesperson told Car and Driver that the automaker “will continue to offer four distinct SUVs in the U.S. and Canada going forward”, though without elaborating on what four models those would be. If Buick discontinues the smaller Encore, three models remain: Encore GX, Envision and Enclave. The fourth could be an electric model, possibly the Electra SUV.

This is pure speculation, but it would be a logical move and is certainly possible.

Shopicar.com, 100% online, shop for your next car, buy online and get it delivered to you anywhere in Quebec!! 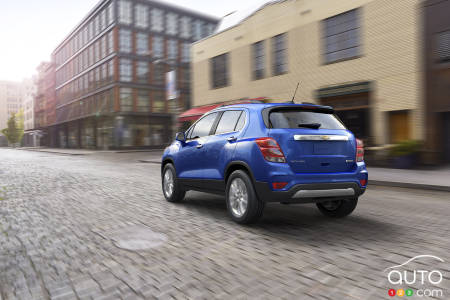 It’s the End of the Line for the Chevrolet Spark

Chevrolet will end production of the Chevrolet Spark, its most affordable model, this year. In Canada, a base model with a manual transmission is currently a...